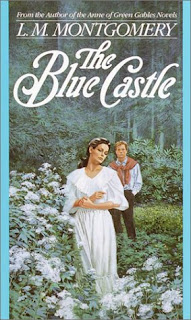 At twenty-nine Valancy had never been in love, and ite seemed romance had passed her by. Living with her overbearing mother and meddlesom aunt, she found her only consolations in the "forbidden" books of John Foster and her daydreams of the Blue Castle. Then a letter arrives from Dr. Trent -- and Valancy decided to throw caution to the winds. For the first time in her life Valancy did and said exactly what she wanted. Soon she discovered a surprising new world, full of love and adventures far beyond her most secret dreams.

For almost twenty-nine years, Valancy Stirling has lived a drab, colorless existence, at the mercy of her controlling mother and extended family that view her as little more than the punch line to a sad joke. Valancy, you see, is an utter failure (or so she's been conditioned to believe) -- a disappointment to her family, unloved and unwanted by any man, doomed to a lifetime's drudgery as an old maid at the beck-and-call of relatives that view themselves as her betters. Valancy is resigned to her fate, but not quite as cowed as her family might believe -- for she takes refuge in her imaginary Blue Castle, a gloriously constructed fantasy escape where her wildest hopes and dreams come true. When she is handed a diagnosis of terminal heart disease, with only a year to live, Valancy determines she won't die before she's really lived. Without further ado Valancy embarks on a journey of self-discovery that shocks her family, delights her sensibilities, and transforms her very countenance, until the Stirling family's "old maid" transforms beyond recognition, into the woman she was always meant to be.

I came to The Blue Castle after a veritable lifetime of appreciating Montgomery's Anne, Emily, and Pat books, but not having revisited even those old friends for several years. Here Montgomery exchanges the youthful tone of her Anne novels for something decidedly more adult but no less charming. Valancy's story is, I'm convinced, nothing less than the divinest of fairy tales for women, like a precious letter from a dear friend who knows precisely, exactly the cost society tries to demand from women in the name of "normalcy" and conformity and dares you to dream something different. Valancy's family are all colored in the best fairy-tale "villain" category -- rigid, unbending, self-centered and humorless -- when one considers Valancy's life opposite such a wall of unyielding expectation, her hopelessly squashed individuality is easy to comprehend.

But that is just part of the genius of this novel. Because when it would be easy -- even understandable -- for Valancy to concede defeat, she perseveres. Though The Blue Castle was first published in 1926, its themes are still gloriously, timelessly relevant, applicable to any woman who has ever struggled with identity, loneliness, self-image and doubt. With Valancy, perhaps in many respects Montgomery's most mature, grounded heroine (vivid imagination included, of course!), she reveals a keen understanding and sympathy for what makes women tick, the hurts and fears we hold within the deepest, most secret part of ourselves that threaten to forever paralyze us -- if we allow it. This is just part of the "magic" of the book -- much like Valancy longs to be real and truly known and accepted for who she is, if one allows it Montgomery's prose strips away the veneer society tells women we must wear in order to be accepted (albeit miserable) and wraps the reader in the comforting reassurance that who we are is who we are truly meant to be.

Given my life-long history with Montgomery's work, I cannot fathom how I never dipped into the pages of The Blue Castle before now -- except to say that the delay was perhaps providential, because I'm not sure that I would have fully appreciated  Valancy and Barney's story before now. I'm not sure I have the words to fully express the absolute, undiluted beauty and power of Valancy's romance. Never has so much been said with so few words, has so much sensuous emotion and passion been wrapped up in a love story of such blinding, overwhelming purity. Barney Snaith is a romantic hero for the ages. *swoon* This was a timely read, an experience I'll treasure, because no matter how many times I revisit Valancy and Barney and their Blue Castle, the powerful impact of this first visit will remain forever etched on my heart.
Posted by Unknown at 5:14 PM

Yes, this is one of my all time favorite books. I absolutely adore it.

I never read this one either, and now I'm wondering, like you, why that is! hehe...another one to add to my list! I loved Anne dearly (you know this!) and also the Emily of New Moon books. But those were perfect for the adolescent girl I was when I found them. And seeing that I have only 2 weeks left of being 29...I better get a copy of this, fast! lol...
great review as always!~

I need to get my hands on a copy of this book.

This sounds awesome. I had a friend highly recommend it to me before.

@Heather - Oh goodness, I think you would LOVE THIS BOOK! And with your birthday coming up -- perfect timing! :)

@Juju - I hope you get the chance to read it soon - it's marvelous!

I am a big fan of Montgomery's Anne books and over the years have read a few of her others. A couple of years ago I put this on my wishlist and recently got it for a gift from my wife. It always sounded like the perfect book to read as autumn winds come blowing in. Glad you enjoyed it, I have no doubt I will as well.

Fabulous review, Ruth, as usual! I just recently read The Blue Castle (I think it was last year) and being a big fan of the Anne books, I don't know how I wasn't at least aware of this one. It's absolutely marvelous for lifelong L. M. Montgomerly fans to find this little treasure now to read and savor as an adult!

@Carl V. - Thanks for dropping by my blog! I couldn't agree more -- The Blue Castle is a great book to read while ushering in fall. :) Hope you enjoy this one!

i have read this book to shreds. i own every english edition published ---yep! 1st and 2nd editions, too!; but my favourite edition (despite its embarrassing cover) is the one that is falling apart: highlighted, with pencilled notes in the margin, splashed and creased and just be-speaking my undying love for what's between the faded covers.

I know this book by heart and I am sooo gladddd that more and more people are enjoying it!!!

Thanks for a beautiful review. Sounds like a great book. To think works like this, with their great, female rolemodels go unnoticed and things like Twilight is swooned over. You wouldn't want to aspire to be like Bella, but you could sure aspire to be more like Valancy!

I remember reading the Anne books when I was maybe 11 or so, and then I watched Road to Avonlea on TV. Think I got hold of the Anne books for the Kindle recently, so have them to look forward to! :)

I read this one a couple of years ago and really enjoyed it. I had a hard time located it though. Finally had a copy come up on Paperbackswap. It was out of print last time I checked.

@Traxy - You are SO SO right! SOOOOO RIGHT. Enjoy the Anne books -- this has me wanting to re-read them! :)

@Joy - It is sad that the mass market version of this is out of print - now that I know what a gem it is I'm REALLY annoyed! Maybe a publisher will bring it back soon!

GAAAAAAH. ONLY THE BEST BOOK EVER!!!!!! (not that you'd know that from the atrocious cover art)

Try not to hate me here, but I scored a Canadian first edition a few weeks back for TEN BUCKS on eBay. The only thing better than reading TBC is reading an old old old copy of it, with that musty book-smell. It brings so much joy into my life, I can't even describe.

No dust jacket, but I am commissioning my sister, an art school graduate and Barney devotee, to paint a custom watercolor dustjacket for it. I will send you a picture of it when she is done...

And I am SO SO SO jealous of your TBC first edition - congrats on the find! Please do send me the picture of the art jacket when it's finished - I can't wait to see it!