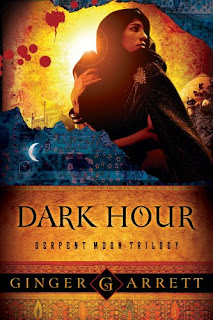 One of the darkest and bloodiest stories of all time comes not from a medieval battlefield but from inside one of the most opulent palaces ever built. The strategies come not from men eager to extend their influence but from women bent on exercising their wit and prowess in a kingdom not their own. Treason and murder are fair game. Marriage is manipulation, a means to an end. Children are the enemy. And the days of the House of David are numbered -- unless one woman can find the strength to conquer them all.

"The Lord declares to you that the Lord himself will establish a house for you...Your house and your kingdom will endure forever before me; your throne will be established forever" (2 Samuel 7:11,16).

"And I will put enmity between you and the woman, between your offspring and hers" (Genesis 3:15).

Years before, God promised David that his descendants "shall never fail to have a man on the throne of Israel" (1 Kings 9:5). But in Israel that promise is a distant memory, dimmed with the passage of time, and the royal house has been infiltrated by idolaters with dreams power and a burning desire to see the Jewish faith permanently discarded in favor of gods such as Baal. The kingdom has become divided. In Israel, Ahab rules with the scheming Jezebel at his side. One of their daughters, Athaliah, is sent to Judah to marry Jehosophat's heir, the prince Jehoram. And Athaliah is every inch her mother's daughter, bringing to her marriage new gods and a burning desire to control the throne and rival her mother's power in the north.

In Dark Hour, the first novel in the Serpent Moon Trilogy, Ginger Garrett brings this small slice of Old Testament history to vivid, colorful life. Garrett's scriptural source material is 2 Chronicles 21-23, the story of Jehoram and his son Ahaziah, and how both were manipulated by Athaliah's machinations and perverse religious influence. She was nearly successful in her carefully planned attempt to usurp the throne and destroy the line of David. Athaliah, daughter of the infamous Jezebel, absorbed all of her mother's ways, and sought at every turn to undermine the Jewish faith and consolidate power to herself and her gods of wood and stone. Her nemesis is Jehoshebeth, the daughter of Athaliah's strongest rival among Jehoram's wives. Jehoshebeth's mother dies giving birth to her, and in her death throes prophesied that her child would be Athaliah's doom. Athaliah, confident in herself and the power of her gods, raised the girl to be ignorant of her true parentage and grew complacent, forgetting her dead rival's words until her pride and ambition led to her downfall. Athaliah ruled on her own for six years following a murder spree she ordered to eliminate her rivals to the throne. One woman dared to stand against Athaliah's murderous schemes and saved the life of Joash, an heir of David, who was eventually crowned and in so doing restored the Davidic dynasty to the throne.

Out of these brief scripture references, Garrett has crafted a stunning novel that illuminates this criticual juncture in biblical history. As Garrett states in her Author's Note, "[t]heoretically, other heirs of the house of David might have been alive to continue the bloodline. But God used Joash. It's startling to think that the future of Christianity, of the person of Jesus Christ, was held in the hands of one terrified woman defying an evil queen." Based on the 2 Chronicles account, little is known of Jehoshebeth. The Bible hints at the incredible bravery and devotion to God that it must have taken to risk all in incredibly dark and dangerous times. In Dark Hour Garrett carefully crafts a very real, flawed heroine who struggles with faith, courage, and destiny, and whose bravery stands as a shining example of God's faithfulness to His promises.

Dark Hour is biblical fiction at its best -- an absorbing, meticulously researched, well-written account of a dark chapter in biblical history. Garrett is a master storyteller and succeeds in a stunning fashion, fleshing out the scriptures and bringing ancient Israel and her people to vivid life. Dark Hour more than succeeded in holding my interest -- it inspired me to delve deeper into the scriptures for further study of the fascinating history illuminated in the novel. In her Author's Note Garrett states:

"For those of you, like me, who once believed the lie that the Bible is a tale of repressed women mastered by men and submitting through force, coming to the tale of Athaliah and Jehoshebeth is a shock. Athaliah did what no woman had ever done, ruling as sole monarch in Judah. Jehoshebeth was a formidable enemy and ultimately proved her undoing. I read the Bible now and am impressed with the role of women in the story..."

Well said. I very much look forward to more from Ms. Garrett. Read this novel and be fascinated and encouraged by this incredible story of God's promises and His faithfulness shown through the life of a woman willing to stand for truth.

Note: I originally reviewed Dark Hour back in 2006, and it was my first read by Ginger Garrett, and remains one of my favorite examples of Biblical fiction done extraordinarily well. As you can see from the cover image, as well as my review, Dark Hour was originally supposed to be the first of a three-book series -- the original publisher, however, moved in a different direction with their fiction line, and the remaining two stories (as noted in my Amazon review) about Samson and Delilah and Ahab, Jezebel, and Elijah were left without a publishing home.

Happily that is no longer the case, and as I mentioned a few days ago, Samson and Delilah's story, Desired, is slated to release October 1st!
Posted by Unknown at 6:49 PM

lol so this was my VERY first CFBA tour book that i received in 2006. i didn't review it until last year. oops.

I really enjoyed this book! Some of the monologue was a bit tedious, but still necessary. It wouldn't have worked to leave it out.

Oh that sounds really, really good!!! You keep giving me books to add....like I have time ;-)