Inspector Lewis continued its fourth series on Masterpiece Mystery last night with a brand-new episode entitled Wild Justice, and no pun intended but what a wild ride it was! *wink* This episode provided some fantastic insight into the emotional depth of the Lewis/Hathaway partnership, and what really makes these men tick. Here's the episode summary from the PBS website:

Rabbis, nuns, mullahs, and Buddhists peacefully commingle with their friar hosts at an interfaith conference at St. Gerard's college. But when an American female bishop is found dead, poisoned by a glass of the college's own chianti, Lewis (Kevin Whately) and Hathaway (Laurence Fox) suspect that the bishop's liberal views led to her murder. That is, until a far more gruesome death occurs, mirroring a macabre murder from a Jacobean Revenge tragedy. It's a case that demands Hathaway's prodigious literary and theological knowledge and Lewis' keen and common-sense gut instinct. But are those resources dimming for the partners as one feels stirrings of his old call to seminary and the other considers his own mortality...and early retirement? They must somehow put struggles with faith aside before an obsessed killer takes another stab at wild justice. Amelia Bullmore (Endgame) guest stars.

Wild Justice was another excellent episode in Series 4, and a standout in the entire Inspector Lewis series thanks to how this case personally impacted Lewis and Hathaway and the insight it provided into each man's character and what makes their partnership tick. The episode opens with Lewis (Kevin Whately) and Hathaway (Laurence Fox) each contemplating a notice at headquarters announcing "early retirement/voluntary redundancy packages" available for consideration. Now, if this was the series finale instead of just episode two, that might raise some eyebrows of concern at the very thought (oh the HORROR!) that either Lewis or Hathaway would seriously consider leaving the police force. So, that worry aside, this case provided a fascinating lens through which we get to see our heroes examine why they do what they do, and count the cost.

Lewis and Hathaway must set aside their contemplations of the future temporarily when they are called to St. Gerard's College to investigate the death of Bishop Helen Parsons (Pamela Nomvete), a participant in the school's recently completed interfaith conference. Lewis has always been -- how shall I say this? -- apathetic when it comes to matters of faith. But Hathaway, who had studied for the priesthood, eats up the case's religious setting like nobody's business. When it is learned that Parsons was poisoned with the college's own labeled wine, and she was last seen speaking to a "hooded figure" (Hathaway relishes the chance to explain the difference between friars and monks to Lewis -- heehee!!), which brings the college staff under sharp suspicion.

Setting a mystery in one of Oxford's specifically religious colleges was a wonderful move, since faith is such an intensely personal thing -- and in Lewis & Hathaway's world, when intensely personal passions run amuck, someone usually ends up dead. The St. Gerard's setting felt so rich with history and mystery, and walked a wonderfully fine line between a place of spiritual refuge and introspection and unexpected danger, where closely guarded passions mask secrets some find worth killing to keep. I was especially interested in the school's patroness, the elderly and regal Adele Goffe (Sian Phillips). I feel like her position vis-a-vis St. Gerard's was not explored as well as one could have wished (perhaps more will be revealed on the DVD?). Phillips has enjoyed a lengthy and varied career, from playing Cassiopeia in the original Clash of the Titans to a guest turn in Poirot. Mrs. Goffe definitely had the Vice Regent Mancini (Ronald Pickup) in her pocket, a friar with an eye to securing his own legacy -- the question being, at what cost? Pickup may be a familiar face to fans of British film, having appeared episodes of Foyle's War and Lark Rise to Candleford, as well as mainstream Hollywood fare like Prince of Persia: The Sands of Time. 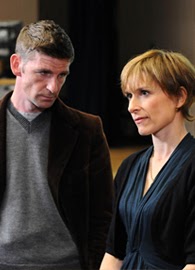 The case grows in complexity, as these cases are so wont to do, when a candidate for Friar Mancini's post of vice regent is found murdered in a particularly gruesome, cruel fashion -- a death that mirrors one found in a Jacobean revenge play. A play that was the subject of a recent lecture by another candidate for the vice regent post, the liberally-minded Caroline Hope (Amelia Bullmore). Of course Hathaway's extensive literary background recognizes the literary death being played out in real life -- and can I just tell you how much I LOVE THAT MAN'S BRAIN??? It's a thing of beauty. Bullmore appeared in Endgame, which if memory serves aired on Masterpiece Contemporary last year, as well as in the Poirot episode Hallowe'en Party which aired on Mystery earlier this summer. The other two candidates for vice regent are the suspiciously sneaky Friar Stephen (Nicholas Sidi) and the affable Joanna Pinnock (Sorcha Cusack). Point of interest -- Sorcha is the sister of Sinead Cusack, the actress who will forever live in my mind as John Thornton's mother in North & South. :) Pinnock has a very enlightening conversation with Hathaway regarding his seminary past -- she recognizes the toll police work has taken on a kindred spirit, and prompts some very interesting moments of self-reflection for my favorite DS. :)

Side note: Caroline's boyfriend/partner is played by Paul Anderson. Wild Justice marks Anderson's second Lewis appearance, as he previously appeared in The Great and the Good, and will be seen on the big screen later this year in Sherlock Holmes: A Game of Shadows.

Things start to get wonderfully weird and messy as they are prone to do in this series when it becomes apparent that the first victim, Parsons, was perhaps not the intended target of the poisoned wine -- and a seemingly unrelated retired detective (Christopher Timothy) is murdered, followed by the murder of Pinnock's son. Both deaths have literary connections, and appear to point to a gruesome power play for control of the college's future. The detective's death brings to light the long-buried and horrific past of staff member Caroline Hope -- but is she the victim here, or a perpetrator out to conceal her past at all cost? The revelations about her history serve as the impetus for some interesting dialogue between Lewis and Hathaway regarding justice and revenge.

I really don't want to give much more than that away regarding the "whodunit" as I did enjoy watching the storyline unfold on-screen, as crazy and convoluted as it was. :) However, I can't let this post end without commenting on Felix (Daniel Ryan), Adele's butler? personal assistant? Ryan played Felix with as this wonderful mix of creepy niceness, sealing the deal by having an affair with Adele's daughter (Amanda Ryan), who struck me as very emotionally immature, probably due to the influence of her apparently overwhelming and strong-willed mother. I recognized Daniel Ryan from As Time Goes By and Doctor Who (though not immediately, had to look him up). However, last night I was EXTREMELY distracted by what struck me as an uncanny resemblance to Brendan Coyle. So let me know your thoughts: 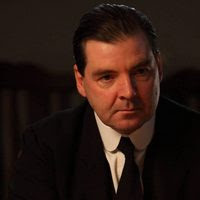 Thoughts? Maybe I just have Downton Abbey on the brain since that show started in the UK this past weekend. *wink* You can be the judge. :)

A couple of additional quick points about my boys Lewis and Hathaway -- I simply adored how this episode drove home the deep regard and respect the two have for each other, even though coming out and SAYING so would probably kill one or both. *wink* From Hathaway's snarky remark "I don't like misplaced apostrophes" (seriously WHERE WERE the Oxford grammar police???), to Lewis's later off-hand comment that he never noticed apostrophes until he met Hathaway -- seriously, what further proof does one need to show how FREAKING PERFECT they are for each other. (Potential spin-off idea -- Inspector Hathaway: Grammar Police...just thinking out loud here...) Bromance for the win! :) And while Hobson (Clare Holman) had a fairly small role in this episode, I love how she is there to remind Lewis that he needs to keep Hathaway abreast of his potential retirement plans. (So sweet!) But the best moment of the night, and perhaps one of my top ten favorite Hathaway moments in the series thus far is at the very end, when Hathaway levels with Lewis and says if Lewis retires then Hathaway's resigning, because no one else will put up with his idiosyncrasies. Yes, at that point I was begging my television for them to just hug already and get it over with! *wink*

I'm really looking forward to next week's installment. If you watched this episode, I'd love to hear your thoughts!
Posted by Unknown at 2:35 PM

He does kind of look like Brendan Coyle! That's creepy.

This ep was particularly brilliant. I'm glad you brought up most of my favorite moments. I squealed with delight at Hathaway's 'misplaced apostrophes' quote (gosh, I love him!!) and Daniel Ryan could be Brendan Coyle's brother or something. I was very distracted by that myself!

My other favorite moment exchange was when Adele asked Hathaway if she looked like a detective and then commented she wasn't so sure if he did either. Well played!

You are so right that this ep had so many great moments of Lewis/Hathaway development...I loved it!

@heidenkind - I know, right? It is kinda creepy.

And you are so right about that Hathaway moment -- he was adorable in pouty mode. ;)

@Lori - So glad you enjoyed this ep too. It was just crammed full of Lewis and Hathaway greatness! :)

Oh and that Adele moment with Hathaway -- that was genius! Glad you brought it up!

"Spastic daughter"? Was she disabled? I didn't notice that.

@Katja - No -- the slang definition of "spastic" is "awkward, clumsy, eccentric" which is what I had in mind when watching this episode.

So it's an insult? Like calling someone a "retard", or "gay"?

@Katja - Yes, I suppose it is an insult - but you've brought up a very interesting point, as in my understanding of the adjective I had no idea someone would class it with those insults you mention. My take on the character when watching this episode was that she was that she was immature, especially emotionally, thanks to what appeared to be an extremely strong-willed/over-bearing mother. I'm probably going to edit this post, since I don't want any other readers to misinterpret my take on the daughter's character, due to my limited understanding of the scope of the definition of "spastic."

I agree she was portrayed as awkward and immature, so your characterization was spot on, but I think it's a good idea to reconsider the word you used.

I did some research, and there are interesting differences in the perception of that word (used in a non-medical context) in the US and the UK, but the consensus overall seems to be that it's not an appropriate slang word.

I appreciate your thoughtfulness on the matter.

@Katja - Thank you for taking the time to dialogue with me about this, and bring my attention to this matter. The last thing in the world I would ever want to do would be to insult or demean, especially due to my ignorance of slang word usage and how that could be interpreted.