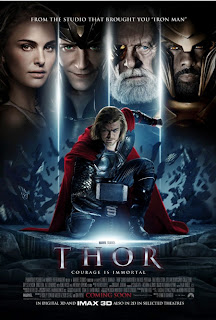 I have clearly underestimated the hold Kenneth Branagh has on my psyche. When the Thor trailer was released a few months ago, all I could do was laugh. Odin repossessing THE HAMMER cracks me up. But when I discovered that Tom Hiddleston played a major role in this movie, and Rachel kept reminding me of the Branagh Factor, and Kaye kept exclaiming CHRIS HEMSWORTH!!, I decided I had to go. After all, my dad is extremely proud of his Danish Viking heritage, so this movie is practically a cultural necessity in my life.

Growing up, movies like The Vikings, starring Tony Curtis and Kirk Douglas, were regularly viewed - after all, when you stop and think about it, there really aren't all that many movies out there that center on Viking types (TRAGIC OVERSIGHT, HOLLYWOOD!). So, given the fact that Odin in a major player in Thor got me to thinking about all of the times people scream for "ODIN!!!!" in The Vikings. Thankfully for you, some kind soul on YouTube uploaded this priceless montage:

You're welcome for that. :) So, now's the point I tell you that yes, there are times when Thor really is as cheesy as those clips. But I really liked it nonetheless. :)

So as a kid I was a big Justice League girl, and didn't really know anything about Marvel's The Avengers until the Iron Man movies came out, and I developed this thing for Tony Stark, and talk of any Avengers film began to take shape. Now, I have very little knowledge of Thor's comic-book background. In fact, even after seeing this movie I have got to say he still strikes me as an odd superhero to stand alongside the likes of more - mortal or self-made, I guess is the classification I'm looking for - superheroes like Iron Man and Captain America. If anything he's more of a Superman type.
﻿﻿ ﻿﻿Branagh's film is a sort of mash-up of Superman and Clash of the Titans (alternating between the original and the much cooler, more watchable remake). It's impossible not to think of Olympus when viewing this film's glossy, star-strewn recreation of Asgard, the headquarters of the Norse gods. There's lots of sturm und drang in the Asgard universe, as Odin's sworn enemies THE FROST GIANTS OF JOTUNHEIM (yes, really) conduct a successful raid on the Asgardian stronghold. This does not go over well with Thor (Chris Hemsworth), Odin's (Anthony Hopkins) heir-apparent, who wants to go and remind the Jotuns who's boss. Daddy Odin does not approve, as he wishes his firstborn would show a little more prudence and realize that kings should not simply go around knocking in the heads of anyone who looks at them cross-eyed. But since Thor thinks he knows best, he takes his crew - brother Loki (Tom Hiddleston), the "warriors three" (wait for it) - Fandral the Dashing (Josh Dallas), Hogun the Grim (Tadanobu Asano), and Volstagg the Volumunous (Ray Stevenson, who's playing Porthos in the upcoming The Three Musketeers) - and the warrior maiden Sif (Jaime Alexander) to "talk" to the Jotuns, and to make a long story short, things don't go well and Odin has to ride in to save the day. 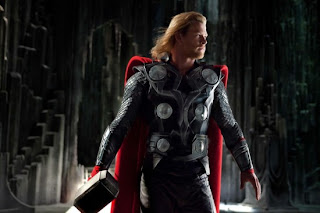 Hoping to teach his arrogant, cocky, jolly Viking princeling some humility, Odin strips Thor of his godlike powers, which are all wrapped up in the gigantic hammer named MJOLNIR (yes really), and exiles him to Earth. There he runs into (literally) Jane Foster (Natalie Portman), a brilliant scientist type researching the idea of an Einstein-Rosen Bridge (which I know all about thanks to season four of Eureka), and finds Thor's abs a bit distracting. Her colleague, Dr. Erik Selvig (Stellan Skarsgard) finds Thor's delusions of Norse god grandeur a bit troubling, and knows an awful lot about S.H.I.E.L.D., the mysterious federal agency he's understably wary of butting heads with. There's also a plucky graduate student assistant sidekick, Darcy (Kat Dennings), who provides occasional moments of comic relief (in addition to the Vikingish shenanigans, mind). They must all band together as Thor seeks to recover his powers, care about others, and save mankind and the Nine Realms from his crazy brother Loki (who, SHOCKER!!, isn't really his brother). I LOVE FAMILY DRAMA IN SUPERHERO MOVIES! 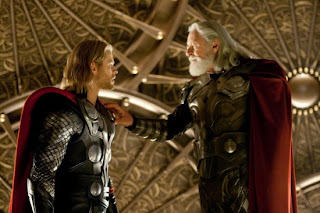 Anthony Hopkins was awesome as Odin - if you want to lend a movie with a potentially ridiculous superhero gravitas, clearly it is necessary to cast someone like Hopkins in the mentor role. And I have to give a shout-out to Rene Russo as Thor's momma, Frigga, because that is a flipping awesome name. If you don't get to do much in Asgard, well the name more than makes up for it. 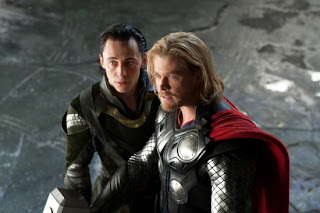 The only thing I've seen Chris Hemsworth in prior to Thor is his brief appearance as Kirk's father in the last Star Trek (and sadly for him, he didn't even merit a mention in my review). Physically he fits the role of Thor perfectly, but I have to admit that for the first hour or so I was a little worried he was only capable of brawn, and entirely lacking in brain cells. But as the film progresses and Thor is humbled and becomes willing to sacrifice himself for the sake of others, the character actually became a superhero I rather cared about. And really at the end of the day what's not to like about a guy who can pull of a dashing red cape with such aplomb? Anyways - as is the norm with Branagh's films, Thor is liberally sprinkled with light comic touches, and Hemsworth reveals a decent aptitude for comedy, especially playing the straight man in all of Thor's "fish out of water" scenes as he learns Earth ways (like how to order a second cup of coffee). Incidentally, Hemsworth is the brother of Liam, who made a good impression on me last year in The Last Song. Talented family. :) 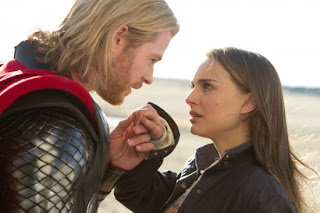 I was a little worried Natalie Portman's Jane might prove annoying, but Portman seems to be having fun with the role and she's always struck me as being highly intelligent, so she fits her character's occupation rather well. She and Hemsworth have some decent on-screen chemistry (really I would worry about Portman if she didn't with Hemsworth! *wink*), and I really got a kick out of Jane's reaction to Thor's chivalrous language and rather "courtly" demeanor, especially when he kisses her hand (twice! what a lost art! *swoon*). And I loved the fact that Jane's the one who kisses him at the end of the movie - and the ending, oh the diehard romantic sap in me LOVED it. Separated by a broken wormhole, a desolate Thor is assured by the stoic gatekeeper Heimdall (Idris Elba) that his lady-love has not forgotten him and is working tirelessly to find a way to Asgard. *swoon again* I'm convinced only Branagh could've successfully directed such a gloriously over-the-top romantic lovers-across-time-and-space moment like it. 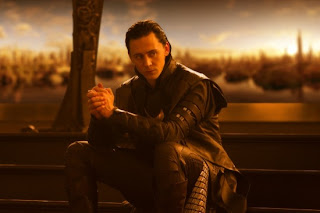 Tom Hiddleston proves to be a frankly inspired casting choice as Loki. He's lean to Hemsworth's brawn, and his angular features and lithe appearance fit the role of "god of mischief" PERFECTLY. Hiddleston should be a familiar face to Masterpiece fans (and blog readers), as I loved him in Return to Cranford and Wallander. Hiddleston to his everlasting credit is wholly believable right from the start of the film - he really seems to relish playing the conflicted, over-looked second son and bad guy, and isn't at all put off by the ridiculous headgear he gets to sport for the climatic fight with Thor. Speaking of the fight, please, for the love of all that's good and holy in comic book movieland, please work on Thor's flying skills for The Avengers. Because I did not like finally getting to a place where I could take Thor (relatively) seriously, only to be forcibly reminded of Superman circa-1978 when he started to glide...I mean fly. AWKWARD. 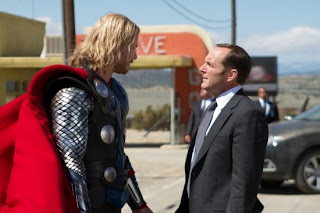 One of my favorite characters from the Iron Man movies is Agent Coulson (Clark Gregg) from S.H.I.E.L.D. Gregg is amazing, he brings whole new, delightful levels of snarkiness and sarcasm to the screen, like his exchange with a captured Thor after the god's failed attempt to retrieve his hammer - Coulson is equal parts disgusted by the ease with which Thor dispatched his agents and intrigued. I just love how Coulson is completely unflappable by pretty much anything (except perhaps Asgard's Destroyer, which is sort of like Iron Man without the man inside). I want to write the man an ode. Heck, I want a whole movie dedicated to Agent Coulson's background and how he came to be involved in S.H.I.E.L.D. During the S.H.I.E.L.D. scenes, look for a brief Jeremy Renner cameo - I'm so, SO happy Renner is going to be appearing in The Avengers as Hawkeye next year.

The more I think about it, the more I realize it's glaringly apparent Branagh was the perfect choice to direct a film on the origins of a superhero from Norse mythology. No man-made superhero would do for Branagh - something about tapping into ancient Norse gods just screams for Branagh's flair for Shakespearean drama. He keeps the action moving at a brisk pace, and injects a healthy dose of humor into the film to keep things interesting. I was thrilled that once again he worked with longtime musical collaborator Patrick Doyle, who provides a gorgeous, epic score. 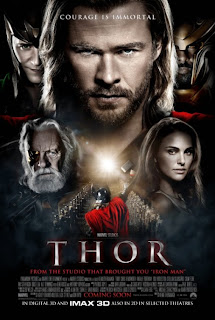 (Side note: I couldn't decide which poster I preferred. Thoughts?) Thor was an unexpectedly fun diversion, and I'm looking forward even more to Captain America's release in July. Little beats a good comic book movie for for a thoroughly entertaining summertime diversion. Thor delivers in spades with an old-fashioned adventure movie sensibility, lots of humor and heart, and an entertaining myth arc (and goodness knows I love a good myth arc and heroic journey rife with sacrifice and angst). If you've seen the film, I'd love to hear your thoughts! :)
Posted by Unknown at 3:49 PM

Wow. Sounds good. I was at the movies today and saw this GIANT hammer display for THOR and just laughed. Like Thor is so cool we just need this single giant hammer...no words...just cool hammer to sell our movie.

Haha, how's this for timing? We're planning on going to see this one tomorrow! :)

@Jenny - I am totally jealous, my theater didn't have a GIANT HAMMER on display. I so would've had my picture taken with it. LOL!! The hammer fixation in publicity for this movie cracks me up!

(Back to your regularly scheduled programming.)

This review is awesome and totally has me sold on seeing the movie {which had already intrigued me - I'm kinda a sucker for guys with blue eyes ;)} while a previous review I'd read almost convinced me otherwise. Obviously, the better written review wins! Good job! :D

@Elaine - Aww, thanks! :) Glad you enjoyed my post, and I hope you enjoy the movie - let me know!

YAY! I totally missed this somehow on my blogger dashboard... so I'm so glad you mentioned it in your comment. By the way--never feel bad about linking to your reviews! I always want to know your thoughts on movies I've seen. :) Your reviews are crazy awesome.

I totally agree about Branagh--his movies are great, and he did spectacularly with a superhero movie. And Patrick Doyle's music... I love it so.

OH and Liam! I just saw Last Song last week, because my curiosity was killing me. He was awesome. Did you ever review Last Song? I'd be interested to hear your thoughts on that...

@Polka Dot - Thanks for stopping by! And thank you for the review compliment. :) I have enjoyed reading yours too!

And you are in luck! I did review The Last Song last year - here's the link: http://booktalkandmore.blogspot.com/2010/04/last-song.html