Miss Marple: The Secret of Chimneys 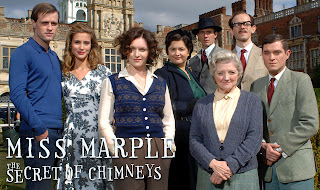 As I mentioned last week, Masterpiece took the weekend off in honor of the Memorial Day holiday, but made an encore presentation of last year's Miss Marple episode, The Secret of Chimneys, available for online viewing. Since I didn't officially review any of the Marple Series V episodes on the blog last year, I thought this would be a great time to revisit my DVD copy of this show, which is in my opinion one of Julia McKenzie's strongest outings as Miss Marple. Here's the episode summary from the PBS website:

History has been written within the walls of the stately Chimneys estate. But Chimneys's luster was tarnished after a grand party that ended in the theft of a revered Indian diamond. Now, more than 20 years later, Miss Marple (Julia McKenzie, Cranford) is accompanying Virginia Revel to Chimneys, her family home, for a weekend with Virginia's father Lord Caterham (Edward Fox, Oliver Twist), Austrian count Ludwig van Stainach and an odd array of other guests. But when Count Ludwig is found shot, it seems scandal has come again to Chimneys. Is there a coded message in the dead man's pocket? An esteemed chief inspector (Stephen Dillane, God on Trial) arrives from Scotland Yard, and with the clear thinking of Miss Marple, the two will uncover decades old secrets, and navigate through the smokescreen of perplexing clues to the truth of what happened at Chimneys. The Secret of Chimneys is based on the novel by Agatha Christie. (One episode; 90 minutes)

I haven't yet read the Christie novel on which this film is based, but a cursory glance at the summary of the book makes it obvious that this is another mystery that's been well re-written for the screen. The most obvious change is that once again this series of films has taken a non-Marple novel and inserted the beloved sleuth into the storyline. Since I have nothing with which to compare this adaptation (yet, at any rate! haha!), I can only review it on whether or not I feel as though the story works on-screen. I have an admitted bias to the Marple films from the last few years - while I still prefer Geraldine McEwan's Miss Marple, Julia McKenzie's portrayal is growing on me. And these films, no matter the accuracy of the adaptation, are a great excuse to gather a slew of British acting talent in once place, and drop them in a period setting - the recipe for a cozy mystery lover's dream.

At the opening of the film, we catch a glimpse of Chimneys in its glory days, a place where fabulous parties were held and sensitive diplomatic negotiations were brought to a successful resolution. But at one fateful party, a romantic assignation is interrupted, and a priceless diamond is stolen. The subsequent scandal sidlelined the career of prominent politician Lord Caterham (Edward Fox), until twenty years later an opportunity for redemption appears. Caterham is approached by the smarmy politician George Lomax (Adam Godley), who presents Caterham with a proposal - Ludwig von Stainach (Anthony Higgins), an Austrian count, is being courted for iron ore concessions, and he requested talks take place at the once-famed Chimneys. Lomax has a secondary motive for pushing the Chimneys gathering - he's attempting to coerce Caterham's daughter, Virginia (Charlotte Salt), into marrying him in exchange for the financial security of her now cash-strapped family. Virginia is sorely tempted to agree to the marriage of convenience, except for her attraction to the highly unsuitable (i.e. poor) but adventurous Anthony Cade (Jonas Armstrong).

As the principle players gather, Miss Marple becomes one of the party since she is apparently a beloved distant cousin. (Seriously, it is hilarious how easy it is for Miss Marple to be related in some distant way to any random person, or connected through her all-seeing and knowing nephew Raymond. *wink*) Joining Miss Marple as part of the Chimneys party is Lomax's easy-going assistant Bill (Mathew Horne) and the nosey Miss Blenkinsopp (Ruth Jones) who wants to see Chimneys purchased by the National Heritage Foundation and opened for tours, the latter of whom quickly becomes the nemesis of Bundle (Dervla Kirwan), Virginia's unfortunately named older sister, who is passionate to see Chimneys remain in the family. Silently watching them all is Treadwell (Michelle Collins), the observant and loyal housekeeper guarding secrets of her own. When the count turns up murdered and Anthony is suspected, much to Virginia's horror, the dashing Inspector Finch (Stephen Dillane) descends on the house and with the aide of Miss Marple, sets to work uncovering the culprit. But someone at Chimneys wants the home's secrets to stay buried, and will do anything to keep the truth from being discovered, no matter the cost. 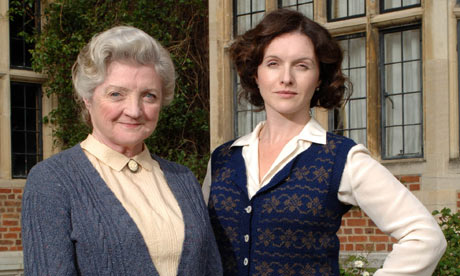 Now, if you look too closely at this story it will fall apart. I suspect that when I read the novel (hopefully later this year), the differences between the text and the script will prove somewhat shocking. I have more faith in Christie's ability to pen a cracking good yarn than I do in the hope of any screenwriter substantially improving on her storytelling gifts. *wink* That said, I love these films. They're my equivalent of cinematic comfort food, I guess. Despite the jumps in logic, Chimneys is an entertaining hour and a half spent in the company of great acting talent decked out in delicious 1950s costumes. The look and feel of the film is just fun, in my view. :)

McKenzie hasn't quite captured my imagination as Miss Marple the way McEwan did in her twelve films as the sleuth (she lacks a certain spark that I feel is necessary), but she's an undeniably accomplished actress and brings a nice charm and warmth to the role. McKenzie is a Masterpiece veteran, having played the role of Mrs. Forrester in Cranford. Based on Miss Marple's interactions with Inspector Finch, it's obvious that she was conveniently inserted into the storyline, and not necessary except for "brand" value when it comes to films. That said, I love watching Miss Marple's interactions with Finch. Dillane is just fabulous as the sauve, poised, intelligent inspector who is determined not to be shown up by a spinster from St. Mary Mead. Dillane appeared in the Masterpiece Contemporary production God on Trial a couple of years ago, and I'd venture to guess he's perhaps best known (at least in the last few years) for his turn as Thomas Jefferson in the HBO miniseries John Adams. McKenzie seems quite taken with Dillane, and really who can blame her? :) They make a pretty adorable on-screen investigative pair. 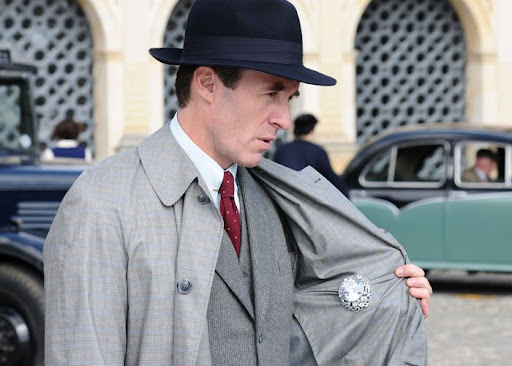 Isn't Dillane's fedora AWESOME? I love it.﻿
Initially I was most interested in this film because it would mark the first post-Robin Hood appearance of Jonas Armstrong. And Anthony Cade is quite the departure from Armstrong's years as a forest-dwelling outlaw. Armstrong is absolutely adorable in his fifties-era clothes (especially the jeans - *wink*). Now that I think about it, the role of Anthony isn't that much of a stretch from Armstrong's angst-ridden turn as Robin. Cade has a flair for the dramatic (his "rescue" of Virginia from a mugger on a bicycle is too cute for words!) and a propensity for melodrama. Admittedly I have a soft spot for Armstrong since his Robin Hood days, and I dearly hope some good projects come his way in the future. He and Charlotte Salt (Virginia) make a lovely on-screen pair. I'm not familiar with Salt's previous film work, but she fits the time period extraordinarily well and epitomizes a classy 1950s woman. I loved her independent spunk and determination to see Anthony exonerated.

While the role of Lord Caterham isn't perhaps Edward Fox's most memorable Masterpiece turn, I love the man and am always interested to see him appear in a new project. He is, of course, the uncle of one of my alternate-universe husbands, Laurence Fox (a.k.a. Hathaway in the Inspector Lewis series). Fox is a Masterpiece veteran, having appeared in Foyle's War, Poirot, and Daniel Deronda (to name a few productions), as well as films like The Importance of Being Earnest. He manages to endow the role of Caterham with a sort of tragic nobility, the like of which only an actor of his stature could achieve.

Rounding out the rest of the cast, we can look forward to seeing the dashing Anthony Higgins later this year in the Zen mystery series. Higgins has such poise and presence, it's not hard to imagine how as the Count he managed to hold all of the Chimneys residents enthralled. Fans of Little Dorrit might recognize Miss Blenkinsopp actress Ruth Jones as Flora Finching in that production (oh for an entire day to spare re-watching that classic!). Adam Godley as Lomax makes a delightfully oily politician - I really enjoyed his turn in the Merlin season two two-parter, "Beauty and the Beast."

This production of The Secret of Chimneys is melodramatic and over-the-top, but nevertheless I enjoy it. I think it's an excellent example of refined, historical British soap opera. *wink* I thoroughly enjoyed revisiting this film for review purposes. Stretches in logic notwithstanding, the characters stay grounded in their world, and really at the end of the day any excuse for Stephen Dillane to charm Julia McKenzie is fine by me. I'd love to hear your thoughts (especially if you've read the novel)!

Chimneys is one of my favorite non-Poirot/Marple/T&T mysteries, so I was looking forward to your review (I *really* need to figure out a way to see these...:-)). Obviously from the synopsis it's *quite* a bit different from the book, but the cast sounds awesome and hey, I can give it a chance. It can't be worse than By the Pricking of My Thumbs...which I admit improved on a recent re-viewing, minus the substansial lack of Tommy and revamping of Tuppence. :-)

And Jonas Armstrong as Cade (who I had a wee bit of a book-crush on - Cade, I mean) was not exactly how I was picturing...but a *very* nice casting choice, now that I think about it. :-) One more reason to check it out!

@Alexandra - Oh thank you so much! Happy to hear that. :)

If you can't watch this episode online by 6/12, maybe your library has the DVD set, since it came out last year? Since you've already read this book, I would LOVE to get your perspective on the film. I think it's a fun piece of fluffy entertainment. :)

I'm glad that version of By the Pricking of My Thumbs has improved on subsequent viewings - despite how it reworked the original story, as a film I really enjoyed it. The cast worked so well, and I thought the film was well-paced.

Hope you can see Chimneys soon - I want to know if Jonas Armstrong works at all for you as Cade! :)

I have absolutely zero recollection of this Marple. Is it the one where the mom like sold off her children in China and was addicted to opium or something? That and the Matthew McFadyen ep are the only two I can remember from last season.

@heidenkind - Oh my, you're remembering the year BEFORE last! :) That opium/China episode was nuts!!! LOL!

Oops... I just left and deleted a message with my personal google account. :U (That's my "duh" face.)

Anyhoo, what I said before was:
Robin! In 50's clothes! Wearing the same smug, furrowed eyebrows! :)

And you are SO right about the eyebrows! LOL!!

I just watched this on my laptop and loved it and Stephen Dillane! Great review!

@Renee Ann - Thanks! I'm so glad to hear that you enjoyed this episode!