Review: In Sheep's Clothing by Susan May Warren

Since I'm still dealing with back issues, I thought I'd pull a review or two from the archives. I originally reviewed In Sheep's Clothing in 2008 and it remains one of my favorite Susan May Warren novels. 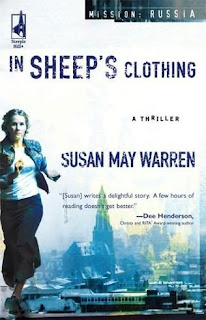 On the run from the murderer of her best friends, missionary Gracie Benson is all alone in Siberia. What she doesn’t know is that she has in her possession a medical secret that will save millions of lives – or cost hers. Trying to keep her alive is an FSB agent, a man pursued by his own demons, including a killer who destroyed his father’s life. He and Gracie find themselves in a decades-old mystery of betrayal and Cold War Secrets. Only with the help of their friends – a group of Americans and Russians committed to freedom – can they outwit the old guard…and save Gracie’s secret, as well as her life.

Missionary Gracie Benson went to Russia seeking redemption, only to find her hopes disappointed. On the eve of her departure, she discovers the brutally murdered bodies of her colleagues. Suddenly thrust into an unfurling web of deception and lies, Gracie finds herself in a fight for her life, with precious few people to trust. Enigmatic FSB agent Viktor Shubnikov emerges as her unlikely ally - but can Gracie look past his FSB background and her own deep-rooted fears and entrust her life to a most unlikely protector? Viktor finds himself instantly attracted to Gracie's fighting spirit and vows to protect her from the killer who shattered his family years before. However, one thing stands in the way of getting as close to Gracie as he'd like - her tenacious faith. He's seen - and done - too much to deserve grace and forgiveness. When events spiral out of his control, Viktor is forced to relinquish control and entrust his future, and Gracie's, to an invisible God's guiding hand.

In Sheep's Clothing is one of my all-time favorite novels, and as such it's long overdue for an "official" review. Gracie and Viktor are classic Warren creations - they leap living and breathing from the page, fully rounded characters brimming with pain, hope, and potential. The inspiration for their story came from events surrounding a KGB plant in the church discovered during Warren's time as a missionary there. The basic issue of trust in a supposedly good God - how He could allow bad things to happen to essentially good people - is at the crux of Viktor and Gracie's respective faith journeys. Despite their divergent backgrounds, Viktor and Gracie both learn that God's forgiveness isn't something that can be earned - it's a gift, freely given. And only when that gift is received, and control is relinquished, can they rest in the knowledge that in time of need, God - Jehovah Jireh - will provide. In Sheep's Clothing delivers non-stop action and riveting romance, along with life-changing, compelling spiritual truths. Warren never "preaches" and never fails to engage the reader on a thrilling, absorbing journey. I highly recommend this book as a starting point if you've never read one of Warren's books before - you couldn't ask for a better introduction.
Posted by Unknown at 9:10 AM

My introduction to Susan's books was Taming Rafe, and I loved it. I've been slow to read the rest of her books but that's changing now. Just stared reading Sons of Thunder, and will put this one on my TBR list too.

Ruth, hope you are feeling better soon. My hubby is also dealing with ongoing back issues. Starting physical therapy soon. So frustrating when we can't find the cause of the pain. Hope you are able to take measures toward healing, and it's getting better. Hugs!

@Lori - You know, I haven't read Taming Rafe yet! I need to get on that and catch up with SMW's backlist! The problem is, she's such a prolific author that's hard to do with all of the new releases! ;)

I do hope you enjoy Sons of Thunder, I just LOVED that book! Looking forward to your review.

Thanks for the prayers, my friend! I *think* I'm turning the corner. Back sprains/injuries are SO frustrating, and I am not the most patient when it comes to waiting for healing. I will keep your husband in my prayers, and wisdom for his doctors, too! Hope the therapy helps!

This looks like a good book. Hope your back is feeling better! :)

@Elaine - Oh it's one of my all-time favorites! Hope you enjoy it. :) And my back is doing MUCH better, thank you for checking!