Warning: This post may be a sign of the apocalypse. I went to see a movie with Miley Cyrus in it this weekend, and I didn't hate it. Proceed with caution. 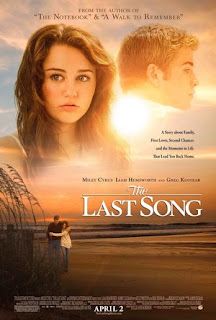 I joined a friend on a whim Saturday to see The Last Song, based on the novel by Nicholas Sparks (which I haven't read BTW). I hadn't planned on seeing the movie in theaters for a couple of reasons: 1) it's based on a Sparks novel, and something emotionally draining and/or devastating always happens in his stories and 2) it stars Miley Cyrus, and I was sure she'd annoy the living daylights out of me. A few random observations...
I have to own to being quite surprised that I enjoyed the movie from start to finish. It's not going to set the world on fire by any stretch of the imagination, or go on any "best-of" lists (probably...I mean I'm sure it will be on someone's list *wink*). However, all things considered I really did enjoy it in spite of the requisite emotionally devastating storyline aspect and Cyrus's "acting." And you know, I'll be honest and own that Cyrus really wasn't that bad, she delivered what the role of Ronnie required of her (being a moody teenager with daddy issues) so it worked for me.
One of the highlights of the movie was the relationship between Ronnie's little brother Jonah (played by Bobby Coleman) and their father, Steve (played by Greg Kinnear). I generally just like Kinnear anyway, but put the two of them together as father & son and they made quite the hilarious pair. I loved the scenes where they observed the developing relationship between Ronnie and Will (Liam Hemsworth). Speaking of Will, Hemsworth is a doll, an absolute doll. And the first kiss he shares with Ronnie is fantastic. It definitely gets (at the very least) an honorable mention on my Favorite Screen Kisses list. Speaking of the FSK list, I really should update it for this blog sometime...I mean after all, I haven't revisited the topic since 2007. I've watched a lot of movies since then, just sayin'... :) If you have any suggestions for what should make the list, throw 'em out in the comments...
I am a total Daddy's Girl, so Ronnie's relationship with her father - particularly the point they reach by the end of the movie - pushed all the right buttons and really got to me. I actually thought Cyrus handled her character's maturation pretty well. So yeah, to finish things up, The Last Song was a surprisingly enjoyable flick. Loved the scenery, and I really enjoyed the music (you can check out the songs here, everything from OneRepublic to Edwin McCain). Not a bad way to spend an afternoon in my book... :)
Posted by Unknown at 3:33 PM

Seriously, though, I think Miley has gotten a worse rep than she deserves. I'm not claiming that she's a brilliant actress, but she's competent and entertaining, and isn't that the point?
I certainly know a lot of actors/actresses who are MUCH worse than her, but meet critical and popular acclaim at every turn.

For my opinion on Nicholas Sparks, see this article. The things he is attributed to saying in that article, if true, account for my total lack of respect for the egotistical jerk. And if untrue, well, I still have no respect for him.

@Jamie - Okay, that how to write a Nicholas Sparks movie poster thing cracked me up!!

I was actually wondering if this movie was going to be any good, because of Miley Cyrus, I just might give this a chance. If...I can get past her being Hannah Montana. LOL

@Elizabeth - Well since the movie doesn't require Miley to play a singer, that helps! LOL!

Very interesting. I'm NOT a Miley Cyrus fan, so when I saw the movie poster at Walmart, I was filled with trepidation. ;-) Might have to give it a try now.

Oh, they finally have the "A Tale of Two Cities" musical DVD and CD for sale on the official website!!!

@Alexandra - I was pretty pleased with it, and I'm definitely not a MC fan either. If you get to see the movie I'd love to hear your thoughts!

And THANK YOU so much for letting me know about the DVD and CD releases for "A Tale of Two Cities" - I will definitely be checking those out!

I had the EXACT same prejudice that you initially had when finding out Miley was starring in this movie. My little sister wanted to go see it in the theatre, and I said, "Heck no... I'm not shelling out the cash to see Miley's crappy acting skills!" (Harsh, I know...) Now that I've read your review and heard good things from others I also trust, I I will have to give it a try after all. (Waiting for Netflix, though. Still not 100% sure I want to buy a theatre ticket.)

Oh my! You're too funny. I need to see this.

@Nat - Not that harsh...LOL! ;) I would say it's definitely worth adding to your Netflix list...