Review: Against All Odds by Irene Hannon 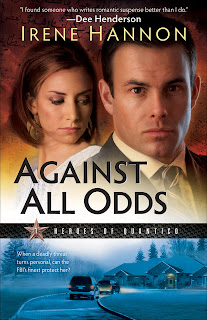 For FBI Hostage Rescue Team member Evan Cooper and his partner, dignitary protection duty should have been a piece of cake. Unfortunately, beautiful but determined Monica Callahan isn’t making it easy. Estranged from her diplomat father – who is involved in a sensitive hostage in the Middle East – she refuses to be intimidated by a related terrorist threat back in the States. That is, until a chilling warning convinces her that the danger is very real – and escalating.

As Coop and his partner do their best to keep her safe, the threat against Monica is rising. And with every second that ticks by, Coop knows that the odds of saving the only woman who has ever breached the walls around his heart are dropping. After all, terrorists aren’t known for their patience – or their mercy.

Evan Cooper, a member of the FBI’s elite Hostage Rescue Team, isn’t thrilled when his next assignment is dignitary protection duty. “Babysitting” VIPs isn’t his dream job, especially when the VIP in question comes with some very high profile baggage. Monica Callahan, the daughter of a prominent State Department official, has become the unwitting target of a kidnapping plot. Terrorists want to use her as leverage against her estranged father, who is involved in sensitive hostage negotiations in Afghanistan. Monica is unwilling to accept that her father’s life could interfere with hers until the would-be kidnappers succeed in sending a message with a threat that’s impossible to ignore. Coop finds himself falling hard for Monica, and thanks to the job forcing them to keep constant company, their budding relationship grows at a rapid pace. When Monica is kidnapped, with only hours to rescue her before the terrorists’ deadline, it’s a race against time for Coop and his team to rescue the only woman who’s ever left him vulnerable to the possibility of faith and love.

I absolutely loved the international angle to this story. The timeliness and relevance of the ripped-from-the-headlines plot ups the stakes and results in a page-turning, suspenseful read. Though Against All Odds is the first book in Hannon’s Heroes of Quantico series, I read the second book first. Each story works well as a standalone novel, but in hindsight I’d recommend reading them in order to get a better introduction to the heroes and witness how their characters and friendships are established and formed through their HRT assignments. Hannon really nails the male point-of-view, and the camaraderie between Coop and his partner, Mark, comes across as authentic and genuine. Thanks to the international angle, I actual prefer this novel to its sequel, An Eye for an Eye. There’s something about the high stakes of sensitive negotiations that can have massive political fallout or finding yourself caught up in events out of your control and not of your choosing, as Monica does, that resulted in a gripping and compelling read. Hannon introduces readers to all of the players in this international drama, and the scenes featuring the terrorist mastermind fighting to regain power and David Callahan’s agony over his work threatening his daughter’s life intensify the story’s fast pace and raise the emotional stakes for all those involved.

Reading Against All Odds has solidified my opinion that Irene Hannon is a romantic suspense author to watch. The plot plays out with a military-like precision, each scene layering on the suspense and increasing the romantic tension between Coop and Monica. Hannon’s research into FBI procedures shines and lends the action sequences authenticity. I also loved how she develops Coop and Monica’s relationship in a completely believable way. When characters meet under high-stress circumstances, an author can make it too easy and convenient for them to fall in love without developing any sort of real, grounded relationship. Hannon goes the extra mile by showing Monica and Coop cement their relationship long after the danger is resolved. The faith angle is also well incorporated into the storyline, such as when Coop’s questions challenge Monica’s faith and deep-set prejudices towards her absentee father. In Monica and Coop, Hannon has crafted a pair of flawed, real characters who find their faith tested by incomprehensible danger and learn new lessons in faith, trust, and forgiveness – it’s a thoroughly enjoyable thrill ride and I can't wait to read Hannon's next book!
Posted by Unknown at 4:23 PM

@Laura - Aww, thanks! Irene's books haven't let me down yet - you should definitely check them out!

Thanks for the great review, Ruth! So glad you enjoyed the first book in my Heroes of Quantico series. Hope you like the final book, In Harm's Way, too. It was just released! Irene Hannon

@16shamrock - Irene, thank you so much for stopping by! I loved your 1st two Quantico books so I am sure I'll love the 3rd! :)

I read this book, its an excellent read, thank you for sharing your review
In Christs Love
Michelle~

@Michelle - Thanks for the feedback! Great to know you enjoyed the book too.

O I just got this for my Kindle. Thanks for the review. I was wondering about it.

@Juju - I'm reading the 3rd book in this series now (In Harm's Way) and in my opinion it's the best one yet! Hope you enjoy Hannon's writing!

Another Fantastic review! I'm definitely linking to it on my blog.

I really enjoyed Against All Odds. Irene Hannon is like another Dee Henderson!

My one disappointment was the purely physical attraction between the two and some of the descriptions. I found myself saying “oh, come on. This is cheesy.” It rankled me throughout the book to an small extent as well. However, the relationship really developed well throughout the novel – much more in-depth than many characters you find in novels.

I wrote an in-depth review on my own site at
www.tracysbooknook.com

@Tracy - Thanks for linking to my review! I agree, Hannon is very like Henderson, one of the reasons I think I so enjoyed this series. I think each book in this series just gets better & better, so you're in for a treat. I loved #1 and #2, but #3 was my fav.

Just finished this book myself, I absolutely LOVED it, the author not only keeps the suspense up, but isn't afraid to actually use the English Language. Her burst from the headlines subject matter, intricate characters and faith based approach to characters leaves me wanting more. I applaud the authors choice to leave out all that sex and instead embrace the true definition of what Romance is all about!
I can't wait to read another, and another and another!

@Kadence - Thanks so much for stopping by my blog! Always great to meet another fan of authors I love like Irene Hannon. I hope you get the chance to read her other three published books - and then there's a new one due out in late summer/fall 2011.