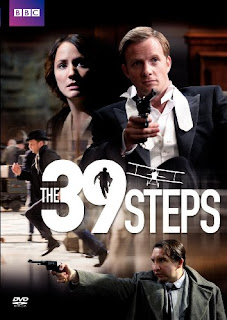 A couple of weeks ago now, Masterpiece Classic aired the newest adaptation of The 39 Steps, based on the novel by John Buchan. Here's a bit about the storyline from the PBS website:

"A prehistoric boor and an unhinged hysteric. Hardly a marriage made in heaven." Richard Hannay and Victoria Sinclair in The 39 Steps
Newly returned to England on the eve of World War I, Richard Hannay's (Rupert Penry-Jones, Persuasion) listless London life is about to spiral out of control. When a neighbor bursts in with a top-secret notebook full of cryptic codes and a frantic story of an impending assassination, unlikely patriot Hannay is soon on the run to save himself and his country. He bumps into feisty suffragette Victoria Sinclair (Lydia Leonard), and while their fates may be intertwined, their personalities aren't. But like it or not, they'll together navigate murder, betrayal and near death in order to untangle a plot of national importance, and understand the charms and challenges of human nature. A bracing and romantic thriller, The 39 Steps is based on the novel by John Buchan.

Now, I've yet to read Buchan's novel, and I have only the vaguest memories of seeing what is perhaps the most famous film adaptation of this story - the 1935 Alfred Hitchcock film starring Robert Donat and Madeleine Carroll. In general being a fan of Hitchcock's work, I remember enjoying it, but that's about it. That said, I feel like I was able to come to this film with no expectations - and I thoroughly and completely enjoyed it. First of all, as far as Masterpiece and British film in general goes, it's got a unique and fresh setting - it's quite rare (in my experience, anyway) to find films set during the World War I years. Everything from the history to the clothes and sets is feels fresh and makes for absorbing viewing.

Of course it's hard to argue against Rupert Penry-Jones being the film's biggest draw. Anyone who has read my review of Persuasion can probably guess that I'm a fan. :) I think you'd be hard-pressed to find an actor more suitable to play Richard Hannay and make the transformation from languid, bored aristocrat who is pushed quite unwillingly into the high stakes world of international espionage. It would almost be enough that RPJ wheres a tux for a good part of the film, and I don't think I can even begin to talk about the shirtless scene halfway through the movie without starting to drool and mumble incoherently. That was a gift, thank you BBC. ;-) But in addition to all that, RPJ reveals quite a knack for light comedy. Had no idea he had that in him after seeing his much more serious turns in Persuasion and MI-5. Rupert can be quite funny given the right material, and has a real gift for sarcasm and understatement. Very, very well played. Yet another random side note - I loved the scene where Hannay pulls a Cary Grant and runs from the plane trying to shoot him down in the field. That scene just defines another Hitchcock classic, North by Northwest, and anything that reminds me of that favorite is a good thing in my book. :)

Hannay's love interest in the film is Victoria Sinclair, a fiesty suffragette played by Lydia Leonard. Previously, Leonard has appeared in one episode of Foyle's War and played a Angela in one of my all-time favorite mystery shows, Jericho. It's my understanding that there is no love interest for Hannay in the book, and that one's always been created in the film versions. I absolutely loved Victoria's character, and watching her spar with Richard provided scene after scene of laugh-out-loud moments. Their relationship is a case of the battle of the sexes and opposites attracting at its finest. In Victoria it's great to see such a strong-willed, fearless character. RPJ and Leonard have some excellent on-screen chemistry, and I loved watching the relationship develop between their characters and they sought to outwit German spies (apparently given free reign in Scotland, haha).

There are several other notable cast members worth mentioning. First of all let's talk about Scudder, the spy who gets Hannay into this life-or-death mess. Scudder is played by Eddie Marsan, who's become quite fixture in films mentioned on this blog - he's appeared in Little Dorrit, Me and Orson Welles, and Sherlock Holmes, to name a few of his recent credits. There's something about his face and manner that allow him to play the desperate secret agent quite well. David Haig is another familiar face - he plays Sir George Sinclair, Victoria's uncle. Haig has appeared in everything from Marple to Two Weeks Notice. Patrick Kennedy plays Hellory, Victoria's brother - he also appeared in Me and Orson Welles, as well as Bleak House and Atonement. Kennedy is quite funny in his role - he's so spacey and vapid compared to his razor-sharp sister, the differences between them are hilarious.There's a couple more familiar faces, but I'll end by mentioning Alex Jennings' appearance. Jennings plays the elusive Captain Kell, the secret service contact Scudder wants Hannay to pass his encrypted notebook on to. Jennings was most recently seen in Cranford as Reverend Hutton.

Aside from the hilariously random, tacked on ending which I'll talk about in a minute, I really loved everything about this film. James Hawes directed this film, and combined with a solid script he keeps the pace of the film flying - there's nary a dull moment in the movie's short 85-minute run time. The way this film is structured and the story unfolds, I was hooked from the first scene. As a random point of interest, Hawes has apparently also directed several Doctor Who and Merlin episodes. He's got a good handle on making some of my favorite television programs, no? :) I also really liked Rob Lane's score (Lane has also scored Merlin). It's got an old-fashioned, adventure movie feel to it which fits perfectly with the storyline.

I love a good adventure/spy flick, and The 39 Steps fits the bill perfectly. But seriously, what is with the randomly tacked on happy ending?? (Possible spoilers...) So RPJ delivers this adorable speech about wooing Victoria, and then she's shot by the random German agent everyone seems to have forgotten about, falls into the lake, and magically survives to see Hannay off to war several months later?! NO ONE was around to pull her out so how the heck did that happen?! Getting shot and then having to pretend to drown is some national secret? And seriously, we're supposed to cling to the hope that Hannay somehow survives the trenches to reunite with Victoria after the war...hmmm...I hate that the cynic in me is surfacing here, but he's going off at the beginning of the conflict. Odds are not good for poor Hannay. *sob* I am a total and complete sucker for happy endings, but compared to the rest of the movie the way the Victoria thing is resolved was more than a little lame. But considering everything else this movie has going for it - Rupert Penry-Jones, fabulous settings, great costumes, a life-and-death car chase in Model-Ts, Rupert Penry-Jones, brisk direction, wonderful music, and did I mention Rupert Penry-Jones? :) - The 39 Steps is a thoroughly entertaining, unique entry in the Masterpiece Classic schedule. Highly recommended.

And just because, here's another picture of RPJ...go ahead and swoon, I'm right there with ya... ;-) 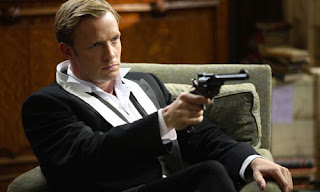 The ending was hilarious. I had to laugh when a submarine appeared out of nowhere in that tiny little cover. Too funny. But her still being alive? Uhg, puh-lease.

I'm with you on the ending, but tbe rest of it I really enjoyed.

@heidenkind - I know, the submarine thing - SERIOUSLY? But her still being alive at the end took the cake.

@Jennifer - Glad you enjoyed it overall too!