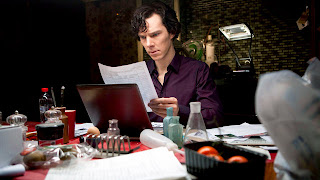 As you may be able to imagine, I'm pretty bummed that Sherlock ends its first-season run on Masterpiece Mystery this Sunday. One THREE episodes?! Torture. But I'm also quite excited to see what sort of surprises the show has up its sleeve to delight fans like myself. The third episode is entitled The Great Game. Here's a bit about the story:


Sherlock concludes this Sunday, November 7, 2010 on MASTERPIECE MYSTERY! In The Great Game, Sherlock Holmes (Benedict Cumberbatch, The Last Enemy) is bored. He's not just staring at the walls, he's shooting them. But then an explosion rocks Holmes and Dr. John Watson (Martin Freeman, The Office UK) out of their doldrums into a series of deadly puzzles conceived by a brilliant bomber. Sherlock is co-created by Mark Gatiss and Steven Moffat. (One episode; 90 minutes; TV-PG).

And here's a short preview:

I've given up entertaining on Sundays, because I can't just kick people out when my shows come on!!
BBC is making me antisocial! :D
3 episodes does not constitute a "season" in my book! Sheesh!

And I agree...I do wish BBC's idea of a "season" was more than 3 episodes...but I will give them this, those three are of the highest possible quality, no?

Ruth, you are right, of course. Three of the best is worth more than a long season of "Meh! Why did I waste my time with THAT?" kind of television.

@phylly3 - Well however that may be the case, it certainly doesn't lessen the frustration, does it? *sigh* :)