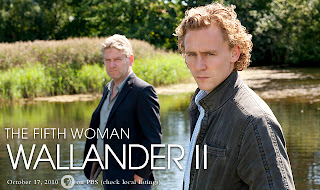 Wallander concluded its superb second season on Masterpiece Mystery with The Fifth Woman. Now, I read a few reviews here and there on the internet expressing some dissatisfaction with this episode - apparently it deviates somewhat from the original Mankell novel. However, as I mentioned in a previous Wallander review post, I'm not familiar at all with the books, so I really enjoy viewing these films with no foreknowledge of the storylines. If the filmmakers made significant changes in this adaptation, I'm rather glad I didn't know - because I thoroughly enjoyed this episode. I know I say every time that Kenneth Branagh is brilliant, but this episode is the crowning jewel of his acting during this season - it's quite the experience. Here's the story summary for this episode from the PBS website:


A bird-watcher falls to his painful death while being observed by a masked figure. A florist with a violent past has gone missing, stains of blood spotting the floor in his orchid-lined shop. Inspector Kurt Wallander (Kenneth Branagh) is torn between two disparate murders while dealing with one harsh and heartbreaking reality — the demise of his father. When another victim is found, it is clear that a serial killer is at work in Ystad. It is one of Wallander's most personal and harrowing cases — one that will even bring him into an unexpected kinship with a killer. The Fifth Woman is based on the novel by international bestseller Henning Mankell. (One episode; 90 minutes, TV-PG)

This episode opens with a heart-breaking preview of what's to come. Wallander is visiting his ailing father, Povel (David Warner), in the nursing home - for the first time in ages Wallander has appeared relatively healthy and functional when in the same room as his dad. Throughout the series their relationship has been highly volatile - tragically the two were more often at odds than not. But Branagh always made sure that as viewers we knew Wallander wanted to get this father/son thing right - he wants to have close relationships, he's just never sure how to make them work, or make the relatively good times last. Povel wants to go home to die, and Kurt obliges, little realizing that his father's death is imminent.

At the same time Wallander is trying to deal with - or suppress, depending on how you look at it - his father's death, a serial killer seems to be at work in Ystad. Two men, seemingly unconnected, are murdered in brutal, public ways. That has to be one of the most awful things in the world to try and fathom - the apparent, vicious randomness of it all. But of course there's a connection - Wallander just has to find it. One of the cases introduces a tantalizing possibility into Wallander's life - he meets a woman. But can it possibly work in our highly dysfunctional detective's life?! Oh the stress! *sigh* Vanja (Saskia Reeves) is the secretary and one-time lover of one of the murdered men. I love watching Branagh's face when the two first meet on-screen - there's this little spark, this little breath that lets you know how interested he is - but it's been so long he's not sure what to do with those feelings.

As Wallander tries to work the murder cases, he ends up interviewing several family members and acquaintances of the victims - it's interesting to see him probe their grief as he attempts to work through his feelings about his father's death. The murdered men were, by all accounts, difficult at the very least - in that respect similar to Kurt's father. He really struggles trying to figure out exactly how he's "supposed" to feel about the whole situation - the key of course being, I think, that sometimes you just need to be, you know, and *try* not to overanalyze everything, or as Kurt often does, repress it all. Povel's final words to his son were an admonishment to "find someone to sit with him," since no one can or should do life on their own. There's an hilarious moment when Kurt decides getting a dog will do for him - silly man. *sigh*

So, on to the crimes. Three unconnected men have been murdered, and all had a penchant for violence and abuse towards the women in their lives. The break comes when Vanja recognizes a photograph of the third victim's latest lover - it turns out all the men were related by their relationship to a group of women, including Vanja, who belonged to the same support group for abused women. It was at this point in the film that all of the pieces fell into place with absurd ease - the perpetrator wasn't just telegraphed, her name was put up in flashing neon lights. But the crimes weren't really the point of this story - it's why they were committed that's really fascinating, and it's the reason this case has the potential to be a major turning point in Wallander's life. I like the way the summary on the PBS website phrases this - "Thinking about the death of his own father, Wallander recognizes that grief can be drenched in guilt" - and this proves to be an unexpected bond with the murderer.

I desperately hope that Wallander is back for a third series next year. I really, really want to see more of the Kurt that Kenneth Branagh gives us in this episode - the Kurt that confronts his rawest, most painful emotions and finds the courage to set the past aside and take tentative steps into the future. The Kurt who decides that maybe, just maybe, he isn't so damaged that he could never be in a relationship again. Kurt and Vanja's scenes are quite simply a delight to watch. Both of them are so damaged by the past, they carry so much baggage between them, but you don't see that when the two of them are on-screen together. Instead, you see hope. Fantastic acting and on-screen chemistry by both Branagh and Reeves. Wallander goes from still wearing his wedding ring and awkwardly dealing with his ex-wife and daughter (Jeany Spark) at Povel's funeral to leaving his ring at Povel's headstone, symbolically laying that part of his life to rest with his father. Oh, and I have to tell you how much I LOVED the fact that Vanja had one of Povel's paintings in her apartment. At that moment you can see Kurt receive his father's blessing; it's as if he could hear Povel say this is all I've wanted for you, a bit of peace. Such a beautiful moment, and it's a fitting capstone to the most emotionally wrenching yet emotionally satisfying episode of the series to date. I look forward to the show's return.

To those blog readers who could care less about Wallander, thank you for sticking with me as I've tried to catch up on my reviews of this show. I'll try to shake things up over the next few posts. :)

*Random aside - Sadly I don't really have anything to say about Magnus (Tom Hiddleston) in this review, but doesn't he look positively de-lish in the photo? Love ya, Tom. :)
Posted by Unknown at 8:14 PM

I am catching up on this series on Netflix . I really enjoyed it too -- for the same reasons as you . I hope you will review Series 3. I just finished watching it. Next up-- the Swedish series! I must admit I haven't read the books yet, but I may soon!

@Phyllys Faves - I'm so glad you're enjoying this series too! :) I haven't watched the Swedish series so I'll be curious to hear your thoughts!