Wallander: The Man Who Smiled 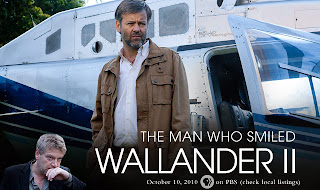 Wallander's second series continued with the episode, The Man Who Smiled, earlier this season on Masterpiece Mystery. This was another superb entry in this second season. Following the events in Faceless Killers, Kurt has left the police force indefinitely after killing a man in the line of duty for the first time in his career. Here's the story summary from the PBS website:


Gustaf Torstensson quietly chants "Mea culpa, mea culpa," as he drives to his death. His son Sten Torstensson, a friend of Inspector Kurt Wallander (Kenneth Branagh), begs the detective to investigate the suspicious case — Wallander is his last hope. But hope has all but drained from Wallander's life, as he's now on indefinite leave from his work and has been all but forgotten after enduring an on-the-job trauma. When Sten is found dead, an apparent suicide, Wallander is drawn back to inquire. The clues and suspects are provocative enough — postcards with death threats, a respected and reviled philanthropist working in Africa and a former cop tormented by his own personal demons. But Wallander's reentry is an uneasy one, and even as the case comes together, his fragile stability and increasingly questionable judgment are severely tested. Rupert Graves guest stars in The Man Who Smiled, based on the novel by international bestseller Henning Mankell. (One episode; 90 minutes, TV-PG)

Branagh's acting once again absolutely shines in this episode. When the story opens, Wallander is on indefinite medical leave, staying at a solitary seaside inn. (Personally, if I was the woman who owned that inn, I'd be extraordinarily depressed having a "guest" as "cheery" as Wallander around 24/7. Just sayin'.) He's not sure if he can rejoin the land of the living, or if he's even willing to try, until he gets a visit from an old lawyer friend asking him to look into his father's death - supposedly a tragic car accident, but he doesn't buy it. It's fascinating to watch the push-pull of emotion play across Branagh's face during these scenes. Wallander might want to deny the fact that he was born to be a police officer, but the overwhelming pull to uncover the truth, to help a friend, is such an integral part of him that it cannot be denied. The cost of Kurt's professionalism on his family is not easy to put into words. His father, Povel (David Warner), is in the last stages of Alzheimer's, and his daughter Linda (Jeany Spark) is understandably frustrated that everyone else seems to be a priority for Kurt except his family.

The subsequent scenes where Wallander returns to his house and attempts to re-establish something close to "normal" life is quiet eye-opening - it really drives home how personally empty Kurt's life really is. No one's been paying the utility bills, so he has no electricity, and his refrigerator is a disgusting repository for all sorts of new varieties of mold. And when bird crap falls on the hood of his car right in front of him? Well, it's a funny scene but it's also a pretty sad statement about his life in general. Kurt's also battling an addiction to what I assume are painkillers - Branagh plays those scenes brilliantly. The pull of addiction and the equally painful pull to resist it all openly play over his features and every mannerism in achingly painful detail. Wallander's personal struggles to just function day-to-day are really the crux of this episode and the most fascinating part of the story for me.

As Wallander attempts to re-enter the police force, he has to contend with some professional tension, mainly from Magnus (Tom Hiddleston). Magnus was the lead officer on the car-related death, and he doesn't even try to mask his annoyance when Kurt returns, with no warning, and starts trying to shoot holes in his case. This was an interesting angle for the filmmakers to touch on - I've always sort of viewed Magnus as Kurt's protege, and of course it can be a very touchy situation when someone in his position is trying to branch out and establish themselves, only to have to admit they don't know everything (yet, anyway). For the most part, Magnus handles Kurt's re-entry into his professional life with fairly good grace, though Hiddleston does have some priceless facial expressions that flash whenever he's especially exasperated with Kurt.

The stakes escalate when both of a wealthy philanthropist's legal representatives end up dead (one of them being the friend who'd attempted to get Kurt to investigate his father's death earlier). The philanthropist, Alfred Harderberg, is played by Rupert Graves, who can currently be seen in the first season of Sherlock as Inspector Lestrade. At first blush, Harderberg is as much of a potential victim as his legal counsel - all three of them had received threats. Harderberg is deeply involved in a foundation he established in Africa - if everything he's doing is so good, why the threats? This is a role that really plays to Graves's ability to be creepy on-screen. Harderberg's smooth-talking, philanthropic exterior masks the heart of a cold-blooded, money hungry killer. The name of this episode couldn't be more fitting - "the man who smiled" turns out to be absolutely, chillingly, soulless.

Wallander has a potential "in" for investigating Harderberg - his head of security is a former police officer names Anders, who was kicked off the force after killing an innocent bystander during a car chase. Anders is played by Vincent Regan, who has appeared in a couple of good programs, from Miss Marple to ShakespeaRe-Told. Kurt's relationship with Anders is an interesting one. Both men have killed people while on duty - however, Kurt gets a pass, if you will, because the death he was involved in was self-defense. The film makes clear, though, that the effects of each death were equally devastating on both Anders and Kurt. Both men have been through nearly identical shock and grieving processes, but it's clear that Anders clearly envies Kurt, because Kurt has a way back "in," the chance to continue to do the work he was born to do, but he must choose to accept that opportunity.

As the investigation progresses, Kurt discovers that Harderberg's foundation is merely a front for selling organs "harvested" from those he claims to help in Africa. While most of the paperwork was in the names of Harderberg's lawyers (which is why the were silenced), Anders is able to provide Kurt with hard proof - after all, who's going to view a has-been cop as a threat? This case provides Anders with a shot at redemption, a way "back in," though he pays for it with his life. It's also the impetus that drives Kurt to fully embrace his life as a police officer - he can't run from his job anymore than he can stop breathing. When he answers his office phone in the final scene I can't help but cheer. Branagh is brilliant in these final scenes and as far as I'm concerned deserves any acting accolades he gets for his performance in this series. (I will say I thought the scriptwriters pulled a pretty good bait-and-switch with Anders's character - up until the end I wasn't sure whether or not he'd turn out to be one of the good guys.)

This season of Wallander reminds me of Joseph Campbell and his definition of the hero's journey (separation, initiation, and return). The over-arching theme of this season is whether or not Wallander can accept his destiny to be a policeman. The events at the end of Faceless Killers sent Kurt running from his calling, but the case of The Man Who Smiled brings Kurt face-to-face with his demons, ready to face his future with renewed focus and purpose. It remains to be seen in the third installment whether or not Kurt will win a decisive victory... :)
Posted by Unknown at 4:23 PM

My BBC Canada catalogue came the other day and I see they have Wallander series 2 in it but where is series 1? Isn't that weird?
I really liked the one episode I saw so far but I don't want to start with the second series.
On another note, MI-5 season 8 isn't in there yet either. Grrrr! I may not want to ever buy season 9 (depending on what happens next week), but season 8 had some great moments (when that woman wasn't on the screen.)

@phylly3 - Okay, that is just bizarre...wonder why they wouldn't line item list series 1?

I would definitely recommend tracking down the first series through Amazon or online for maximum impact and enjoyment...Wallander's story is a real journey. :)

I think I read somewhere that MI-5 Season 8 is releasing in the US in January or somewhere around there...maybe a listing is coming soon? And I hear you on Season 9...things are looking...um, trying...for RA fans. :)

How are you all watching season 9 of MI-5?? I really want to see it!

@Lori - I confess I've just been reading about season 9 online, not actually trying to track down the eps...

Sorry I never got back to tell Lori how I was watching Mi-5 (or Spooks) online.

But I had to tell you Ruth, that I finally saw all of Wallander series 1, 2 and 3! - on Netflix! I was so thrilled to finally watch it all.
Then I started watching the Swedish series - which I LOVE. Now I am watching the Swedish movies (on Youtube).
I am so addicted to this character that I will have to start reading the books!
When I'm done - I'll have to blog about it.
I am still so glad that you pointed this series out to me!