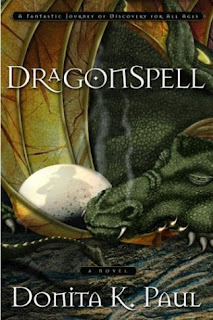 One dragon egg holds the key to the future.

Once a slave, Kale is given the unexpected opportunity to become a servant to Paladin. Yet this young girl has much to learn about the difference between slavery and service.

A small band of Paladin's servants rescue Kale from danger but turn her from her destination: The Hall, where she was to be trained. Feeling afraid and unprepared, Kale embarks on a perilous quest to find the meech dragon egg stolen by the foul Wizard Risto. First, she and her comrades must find Wizard Fentworth. But their journey is threatened when a key member of the party is captured, leaving the remaining companions to find Fentworth, attempt an impossible rescue, and recover the egg whose true value they have not begun to suspect.

Weaving together memorable characters, daring adventure, and a coore of eternal truth, DragonSpell is a finely craffted and welcome addition to the corpus of fantasy fiction.

Kale is a young o'rant slave girl, used to taking orders and living a safe, predictable existence, until her world is rocked by the discovery of a unique talent. She possesses the rare and unique gift of discovering valuable dragon eggs. Sent to the city of Vendela to undertake training at The Hall so she can enter the service of Paladin, her carefully laid plans go awry when she's nearly kidnapped and then her rescuers inform her that she must go questing. Kale and her new comrades have been commissioned to discover the location of a rare and valuable meech dragon egg before the evil Wizard Risto can harness the egg's power to cast an evil spell. Feeling utterly unequipped, Kale is thrust into an adventure beyond her wildest dreams as she receives a crash course in managing her new powers (mindspeaking and dragon raising) and discovering the secrets of her destiny. It's a destiny that both terrifies and intrigues Kale as she must decide whom she will serve - if she survives.

I honestly have no idea why I've waited so long to delve into Paul's fantasy fiction. The plus side for me is, of course, that I have the entire Dragon Keeper series ready and waiting for me to devour. I really love speculative fiction, running the gamut from science fiction to fantasy, and it's a thrill to discover an author so adept at crafting a unique fantasy realm like Amara. DragonSpell feels like it was clearly inspired by J.R.R. Tolkien's fiction, particularly The Hobbit in both tone and scope. Like Tolkien's Middle Earth, Paul's land of Amara is filled with a wild variety of races, each with their own unique languages and customs. Everything from the fabrics that make up the characters' clothes to the food they consume is unique and inventive, and adds rich detail to Kale's world and her adventures. Like all good fantasy, Paul sets up a classic battle between good and evil - the seven high races in service to Paladin and Wulder, and the seven low races in service to the Pretender and Risto. Paul's Christian worldview is rather obvious in this fantasy's allegorical elements, but it really never feels heavy-handed or preachy. Rather, Paul's superb world-crafting abilities provide the colorful backdrop for characters to live out and learn eternal truths.

It took me a couple of chapters to really get into DragonSpell. It's as if there's so much Paul wanted to accomplish with this first book - establishing the setting, introducing new characters, etc. - that it took a while for the story to find its rhythm and focus. However, once that happens Kale's quest becomes quite the page-turner. Kale is a great heroine-in-training - sure, she's got a lot of growing up to do, but I can't wait to discover more about her hidden history and destiny as Paladin's Dragon Keeper. And Kale's companions are absolutely delightful - from the furry and fastidious doneel Dar and his sly, teasing humor, to the absent-minded hilarity of the Wizard Fentworth, all of Paul's creations are hilarious, unforgettable, and genuine. But the dragons and their unique personalities and gifts are by far my favorite characters. Kale's journey is funny, heart-warming, and suspenseful - I can't wait to lose myself in her world again!
Posted by Unknown at 3:01 PM

Oh, I'm glad you've found this series! It's one of my favorite fantasies, right up there with Narnia, if the Chronicles can be called 'fantasy' ;)

@Jess - Oh cool! I'm so happy I've gotten into Paul's books. And I would call the Chronicles fantasy. :)