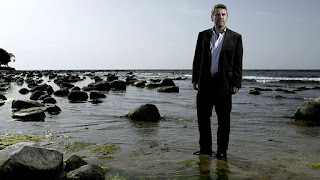 Spoiler alert…
Firewall, last night’s episode of the Wallander mystery series, moved me from “really liking” the show to LOVING it. Simply put, Firewall is a spectacular episode and a terrific vehicle for Kenneth Branagh’s tortured hero. Love, love, loved this episode. Without further ado, here’s the episode summary from the Masterpiece website:
A taxi driver has been brutally stabbed as two teenage girls walk resolutely away, one holding a bloody knife. Inspector Kurt Wallander (Kenneth Branagh) questions Sonja Hokberg, the teen suspect, who replies nonchalantly, "None of this matters." Since when did murder not matter? Is Ystad, Sweden, on the verge of some sort of chaos? As multiple homicides stack up, Wallander realizes they may be the least of his problems. Adapted from the novel by bestselling author Henning Mankell, Firewall finds Wallander facing a gripping countdown to an impending disaster.
Last week’s episode, Sidetracked (read my thoughts on that episode here), did an excellent job of establishing Wallander’s character – scruffy, tortured, and intense. It also introduced his rather dysfunctional family life, and this week in particular delves a little deeper into his relationship with his daughter Linda (played by Jeany Spark). Linda and Kurt are on strained speaking terms at the best of times, apparently, but I love how Linda really refuses to give up on her dad. She wants the best for him, she wants him to have some happiness and balance in his life, and she gets (understandably) exasperated with Kurt’s reticence to comply with her wishes. So Linda signs Kurt up for an internet dating service (again, I have no problem with this, I just think it’s funny to watch and listen to such a “British” cast and then see them type e-mails in Swedish). Ella, played by Orla Brady, is introduced as a love interest for the socially challenged Kurt – but of course, she’s not all she seems – our tortured hero can’t get off that easily, now can he?
Regarding the mystery – I’ve got to say I was really quite impressed with the layers of the story and how they were interconnected, one layer upon the other, until a plot is revealed that’s capable of bringing down governments. I really, really liked the way this story was constructed. I found it deeper and more convoluted than last week’s episode, and I really loved the way Wallander’s attempt to resurrect some sort of personal life intersected with his professional life – even though the result was quite heart-breaking.
Which brings me back to the whole Kurt-Ella thing for a moment. I would’ve loved to have seen Ella become a returning character. Branagh and Brady had some wonderful on-screen chemistry. I simply adored the way Branagh allowed his expressions to loosen up a bit at the beginning of the episode, when he was first getting to know Ella. He really let the viewer see, without expressing it in so many words (who needs words when you have an actor as expressive as Branagh?) just how much this step of even trying for a relationship meant to Wallander. This was a huge sacrifice, a huge risk, and of course the result was crushing. However, I loved Ella’s apology to Kurt – that scene was beautifully, wrenchingly played. I suppose I can’t have my cake and eat it too – what’s a tortured hero with a happy love life, after all? But I’m glad Ella redeemed herself a bit in the end, and I’m thrilled that it led to what may be my favorite Kenneth Branagh film moment EVER – the awesome fight scene at the end of the episode. Who knew that Kenneth B. could kick such serious ass?! I loved it, that scene was actually quite thrilling.
Wallander has been wildly successful in restoring my Kenneth Branagh-love to its former glory. I cannot wait to see next week’s episode, One Step Behind – and I’ll be sorry to see this run of shows come to an end. I believe a second series of episodes is in the works, but I can’t find a link documenting that at the moment. Keeping my fingers crossed that my memory’s not playing tricks on me and that we’ll be seeing a lot more of Branagh as Wallander in the future.
Posted by Unknown at 3:47 PM

I was just really happy that cell phone got it in the end. HOORAY no more annoying ringtone!

@heidenkind - Excellent point! My gosh that has to be the worst ringtone in the history of ringtones!!

What IS Wallender's ringtone? I'm looking for it online. I actually liked the hypnotic frenetic sound.

@A W Roa - I haven't been able to find out what, exactly, Wallander's ringtone is - let me know if you discover anything! And thanks for commenting!

6 months later & have actually found out what Wallander's ringtone is:
http://www.telegraph.co.uk/culture/culturenews/6983024/Wallander-mobile-ringtone-mystery-solved.html
Journalist at Telegraph.co.uk did some digging.

@Ben - Thank you so much for keeping me in the loop on this! Very cool news about the ringtone!