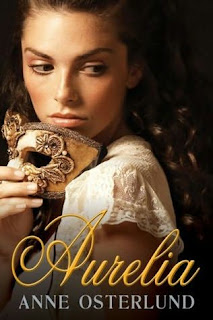 Aurelia
By: Anne Osterlund
Publisher: Speak/Penguin
ISBN: 978-0-14-240579-6
About the book:
Aurelia, the crown princess of Tyralt, wants control over her own life. Robert, her former classmate, wants Aurelia. And someone wants her…dead. There have been several narrowly escaped attempts to assassinate the princess, but the king has no desire to incite panic by making the information public. Instead, Robert, the son of the king’s former royal spy, is allowed into the inner circle to secretly investigate and watch over Aurelia. Robert is determined to help, if only Aurelia would let him! But the princess will not heed the danger around her, and she does not need Robert to save her. Just as their friendship begins to grow into something more, the threat on Aurelia’s life becomes paramount. With everything possible on the line – her life, her kingdom, her heart – Aurelia must take matters into her own hands, whatever the cost.
Review:
Aurelia, the independent and strong-willed crown princess of Tyralt, has always had trouble meeting the expectations placed on her because of her exalted station. She longs to know the common people of her country and to determine her own destiny – particularly resisting every attempt of her father to arrange a politically advantageous marriage. When her old classmate Robert, who happens to be the son of the king’s former spy, returns from frontier life, she has no idea that he’s come to investigate several attempts on her life. For his part, Robert has never been able to forget his former friend, and vows to do everything he can to protect her life. As the threat to Aurelia’s life grows, both Aurelia and Robert find themselves fighting a growing and unexpected attraction to each other. With her survival on the line, when faced with a choice between duty and freedom, which will Aurelia choose?
I admit it, I’m a complete sucker for a gorgeous book cover, and I was immediately curious about this novel when it popped up in my Amazon recommendations. I’m so glad I decided to check it out. Aurelia is a fun, fluffy, romantic piece of escapism – a very pleasant way to while away a few hours. The book is not without its problems – there are a few plot holes and jumps in the narrative that make the story seem unnecessarily rushed. Overall I was pretty pleased with Robert and Aurelia’s character and relationship development – I would say this story is very appropriate for young teens & up. I also have to give Osterlund credit for the reveal of the villain – it was a pleasantly unexpected twist to a story that was feeling familiar (but familiar in a nice, comfortable sort of way). I’m torn about the ending of the book – on the one hand I couldn’t stand it, because the lack of “proper” resolution was maddening. However, on the other hand I have to admire Osterlund’s gumption in refusing to wrap up her tale with some sort of neat, safe, fairy tale-like ending. This is a promising debut for Osterlund, and I look forward to reading more of her work and seeing her story-crafting abilities (hopefully) develop further.
Posted by Unknown at 5:21 PM