Wallander: One Step Behind 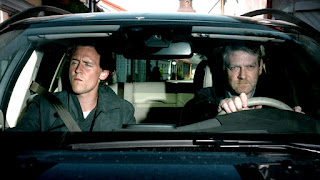 Spoiler alert...
I'm rather bummed this show has come to an end (for these season, anyway - crossing fingers & hoping more episodes are to come!), especially since it's gotten better with each successive installment. Here's the episode summary of One Step Behind from the Masterpiece Mystery website:
Swedish Inspector Kurt Wallander (Kenneth Branagh) is asleep at the wheel of his own life. Exhausted and starved for a nutritious meal, Wallander can hardly be relied on to change his shirt, much less stay awake. A trio of teenagers murdered on Midsummer's Eve shocks Wallander back to life, but it is the death of a colleague that sends him into a guilty spiral. Wallander's colleague got one step ahead in investigating the teen murders before his own death, and may have left a trail for Wallander, but can he focus hard enough to follow it? Adapted from the book by international bestseller Henning Mankell, One Step Behind forces Wallander into battle with a terrible set of crimes and his own demons.
I thought this episode was excellent. I now have a deep and abiding fear of killer transvestite Swedish policemen, which I'll probably need counseling or something to cope with.
This episode, more than any of the previous two installments, really smacks you in the face with how awful Wallander is at reading personal relationships. He might have these great insights into the minds of criminals, but when it comes to dealing with his daughter, or friendships at work, the guy is pretty hopeless. His personal habits, especially his eating habits, make me feel extraordinarily health-conscious, so I suppose that's good. LOL!
What was extraordinarily interesting for me in regards to this episode was Wallander's growing awareness of just how little he knows the people he sees everyday. It was downright painful to see his shock when Svedberg's (the murdered colleague, played by Tom Beard) cousin tells Kurt that he was described as Svedberg's best friend. This knowledge is the first step that really forces Wallander to take stock and face some of the shortcomings and disappointments in his own life and past. Everything then comes to a head when Wallander meets Isa (Flora Spencer-Longhurst), who was not only a potential target of the Midsummer's Eve murders, but she's also a powerful reminder of his daughter Linda (Jeany Spark), and how the fact that he was a "crap dad" almost drove her to suicide when she was a teen.
Kenneth Branagh positively shines in this episode. His acting is brilliant, running the gamut from raw, visceral, explosive emotion (I seriously thought he was going to have a heart attack at one point) to his hilarious reaction when a doctor tells him he has HONK (hyperosmolar non-ketotic acidosis) related to type 2 diabetes. Not that HONK is a laughing matter, but oh my gosh the way Branagh says it is soooo funny! And the stand-off at the end of this episode was brilliantly played. Very, very well done, not to mention riveting viewing.
Loved how this villain seemed so random, yet in a way he wasn't...it was all about who you actually see, wasn't it? All about who you pay attention to, what you deem important and worthwhile - and what can happen a psychopath feels invisible. I'm also very happy that Wallander's team is finally starting to get better developed, more recognizable as characters. I could be completely misreading things here, but I'd love to see Martinsson (Tom Hiddleston, pictured with Kenneth Branagh above) really start to develop as a character. Right now he comes off as equally in awe of and frustrated with Wallander - wants to learn from him, wants to be taken seriously, but isn't quite confident enough...?? If the end of tonight's ep is any indication there should be good things to come (at least I hope so...Linda needs a boyfriend...just sayin'!!!).
This was a FANTASTIC series. I didn't expect to get into this show at all, but it's really grown on me. Series 2 cannot come fast enough to suit me!!
Read my reviews of the first two shows in this series: Sidetracked and Firewall.
Preorder the Wallander series on DVD - it releases June 2nd!
Posted by Unknown at 9:16 PM

I didn't read this review because my PBS station didn't show Wallander tonight--they showed some Memorial Day concert thingy instead. -_- Anywayyy, I don't want to spoil it, but I am bummed that there's only one episode left! I was just started to like Sweden.... ;)

@heidenkind - Bummer! My station showed the Memorial Day concert AND Wallander...it just started a half hour late. I checked the PBS website and this ep will be streaming there June 1-7...so I'm betting (hoping for you, anyway!) that your station will show it next Sunday.