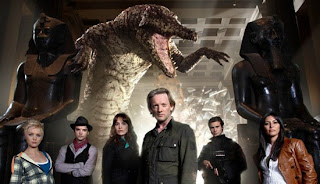 Quick thoughts on the first episode of the new season of Primeval before the second episode airs tonight. I know this can be a bit confusing because British shows are often commissioned for an odd number of episodes per season or series. While this is for all intents and purposes season two in the US, it's really series three (series one consisted of episodes 1-6, and series two episodes 7-13). So that's why there's a "3.1" in the title of this post.

ANYWAYS...I thought this was an extremely strong start to the new series. I absolutely loved it! This show has consistently gotten better and better with each successive episode. The mythology and the conspiracy factors introduced in episodes 7-13 last year really ratcheted up the intrigue and tension, making this a bit more than "just" a dinosaur adventure show. The show is actually really lucky in regard to how well all the pieces of the puzzle have worked as they've been introduced. I don't know how much of an overall "plan," if any, the show runners had from the beginning - either the brilliant pieces of the puzzle were already in place, or the showrunners are geniuses. Maybe both.

Series three picks up right where last year's fantastic cliffhanger left off - the team is still reeling from the aftershock of Stephen's (James Murray) death. I appreciate the fact that the team didn't just forget Stephen and automatically move on with their lives. Though to be quite frank I was ready for his character to die - he'd gotten way too stupid over Helen (Juliet Aubrey). Speaking of Helen, I still hate that chick. She has got to be one of the best villains to come along on television in ages. LOL!

This episode also introduces two new team members - hottie Captain Becker (Ben Mansfield) and Sarah Page (Laila Rouass), a smart and sassy Egyptologist (BTW, loved the action in the British Museum!). All of the other regular team members are back, including Cutter (Douglas Henshall), Connor (Andrew Lee Potts), Abby (Hannah Spearritt), Jenny (Lucy Brown), and my favorite, the acerbic Lester (Ben Miller). Lester had some of the best lines in the episode IMO. When he "cracks jokes" I was just rolling with laughter...love his dry, dry sense of humor. I loved Connor's interaction with Sarah. Not only did she do an excellent job messing with his head (HA!), but he got to prove that he knows a thing or two about what he's talking about - even if his spastic, goofy personality makes him a bit hard to take seriously. Good work by Potts in this ep!

I loved the way this episode introduced the idea that the anomalies are somehow tied to ancient cultural landmarks (like the Egyptian sun cage) and traditions. It makes a lot of sense (as much as a show like this could make sense, HA!!). Myths = anomalies. Should be a lot of fun for the next nine weeks. I also loved the fact that Lester's got a few more headaches to deal with besides the fact that he can barely control the Cutter's team - the government apparently wants to interfere more in his work, as seen by the introduction of Christine (Belinda Stuart-Wilson). Christine's role in the conspiracy has me very intrigued - apparently Helen has some competition for power, artifacts, and a general megalomaniacal desire to control the world and alter the fate of mankind...nothing major. LOL!

I guess that's about it...love Lester, really like the new team additions, still hate and loathe Helen, and I'm so freaking happy this show is back on the air. Remember, new episode airs TONIGHT!
Posted by Unknown at 1:01 PM