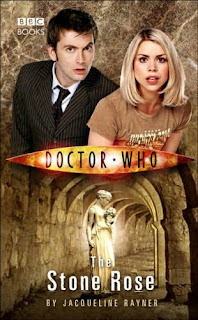 The Stone Rose
By: Jacqueline Rayner
Publisher: BBC Books
ISBN: 978-0-563-48643-5
About the book:
Mickey is startled to find a statue of Rose in a museum – a statue that is 2,000 years old. The Doctor realizes that this means the TARDIS will shortly take them to ancient Rome, but when it does, he and Rose soon have more on their minds than sculpture.
While the Doctor searches for a missing boy, Rose befriends a girl who claims to know the future – a girl whose predictions are surprisingly accurate. But then the Doctor stumbles on the hideous truth behind the statue of Rose – and Rose herself learns that you have to be very careful what you wish for…
Review:
The Stone Rose is my second Doctor Who read by Jacqueline Rayner (following Winner Takes All featuring the ninth Doctor). Rayner takes the Doctor (as played by David Tennant) and Rose (Billie Piper) to ancient Rome following Mickey’s discovery that a statue of the goddess Fortuna, modeled after Rose, is on display in the British Museum. When the two arrive in Rome, they discover that a nobleman’s son has disappeared after modeling for an unlikely sculptor who’s all the rage for the lifelike quality in his works. Rose soon discovers that the sculptor’s talents stem from sinister motivations, and she and the Doctor are thrust into a time-bending, paradox-forming, high-stakes quest to save the sculptor’s victims, oh and the planet too while they’re at it. This novel was a nice change of pace setting-wise – I’ve always enjoyed the television show episodes that allow you to see the Doctor acting within the confines of a historical time period instead of an alien, distant future. For the most part, I enjoyed this story (though I think Winner is a better effort from Rayner) – the first half of the novel was well-constructed, but the second half falters a bit once the whole time paradox element comes into play. It felt like Rayner didn’t quite have the handle on that element of the story that would’ve been required to pull off the reader’s suspension of disbelief successfully. Character-wise, Rayner once again gives an excellent, entirely believable representation of Rose. For the most part I’m also quite pleased with her take on David Tennat’s Doctor, though he does become a bit overly melodramatic (particularly during the arena scene). The supporting cast is also solid, particularly Mickey and the new character, GENIE. It’s a bit unfortunate that Vanessa’s character, around whom so much of the latter half of the story hinges, feels as though it’s developed too little, too late. I’m quite pleased with Rayner’s ability to bring the Doctor and his companions to life, and I’ll definitely be reading more of her Who fiction in the future.
Posted by Unknown at 10:22 AM

I sort of felt like the wheels fell off at the end of this book, but I still enjoyed it. It's not one of my favorites from the series, but it definitely has a lot of great moments to recommend it. I love the scene where Mickey confronts the Doctor, and Rayner really captured the playfulness and affection between the Doctor and Rose. The arena scene was a bit over-the-top, though. (In the audiobook, that part is omitted completely and I thought it really strengthened the story.)

I'm so glad that you're enjoying the Doctor Who books! I'm hoping to read a few of them while I house-sit in June. I'm really in the mood for some new Doctor Who.

@Ruth - A Doctor Who house-sitting weekend sounds like an excellent plan. I have to thank you again for your Doctor Who book recommendations! I've really enjoyed them so far (silly arena scenes notwithstanding - LOL!).