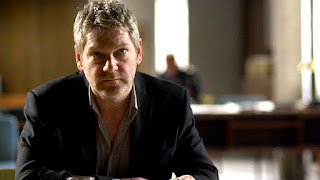 Sidetracked, the first episode of the Wallander mysteries starring Kenneth Branagh in the title role premiered on Masterpiece Mystery yesterday. And the verdict is...I really liked it. I don't see it becoming a series I obsess over (big shocker, I know), but the character of Kurt Wallander is shaping up to be an ideal vehicle for Kenneth Branagh's formidable acting talents. Here's the brief summary of last night's show from the PBS website:
As Swedish inspector Kurt Wallander (Kenneth Branagh) watches helplessly, a young girl stands trembling in a rapeseed field, about to do herself great harm. Wallander's work gets under his skin, and this case is no exception. What evil would drive a girl to such desperation? Wallander is soon distracted from this question by a string of grisly murders. A former minister of justice, an art dealer, a wife-beating thug and a playboy have all been scalped. The haunting memory of the girl in the field drives restless Wallander towards the dark secrets and cover up at the center of the story in this adaptation based on the work of international bestseller Henning Mankell.
I'd never even heard of Henning Mankell prior to reading about this show when the Mystery schedule was announced a few months ago. This show is interesting because apparently the Wallander mysteries are something of a Swedish cultural icon...yet this show has a very "British" feel to it, with a twist. The settings are rather Swedish, I suppose, since they are like nothing else I've seen in a contemporary British mystery series. However, though I only recognized two of the actors (Branagh, of course, and David Warner playing Wallander's father, Povel), the entire company drops British colloquialisms on a fairly regular basis. The resulting show is an interesting hybrid of both worlds.
The most interesting part of this show is not the mysteries themselves, of course, but the character of Wallander. Branagh owns this role. His presence absolutely commands attention whenever he's on-screen. I tend to rather enjoy British shows about haunted, tortured detectives (Inspector Lewis, Jericho), but Wallander takes the type to a new high (or low, depending on how you want to describe it). Wallander is a man who is haunted by his work. He's got abysmal manners (I LOVE it when he gets exasperated with the profiler the department calls in as backup!) and is something of a slob, but he's driven to do his job and do it well, no matter the cost to his personal life or well-being. Physically Branagh easily fits the description of a Swedish man (tall and blonde), but it's his face that makes this character really gripping. Every line, every expression, all the pain and urgency Wallander feels are all beautifully expressed on Branagh's face. Branagh is to be commended for the way he brings a lifetime of skill and emotion to the role.
Casting David Warner as Branagh's father was a stroke of genius. These two play so well off each other, and their dysfunctional but loving father/son relationship is beautifully and realistically portrayed. Their scene together at the conclusion of Sidetracked provided a wonderful, emotional punch to the conclusion of the film. I'm looking forward to seeing how this relationship develops in further installments of the show.
Wallander's character fascinates me...I'm looking forward to Firewall next Sunday. So, if you watched Wallander what did you think?
Oh, almost forgot to add...kudos to Martin Phipps for providing a terrific score! It did an excellent job setting the mood & tone of the show.
Posted by Unknown at 5:32 PM

Okay, I finally watched it. I actually really liked it. I never thought Kenneth Branagh could look so Swedish. LOL The British talking and whatnot actually didn't bother me too much--I still felt like the setting was in Sweden rather than Britain, so it was okay.

@heidenkind - Yes, pretending Kenneth is Swedish is not too much of a stretch w/ his looks, is it? LOL! I am looking forward to the next episode.