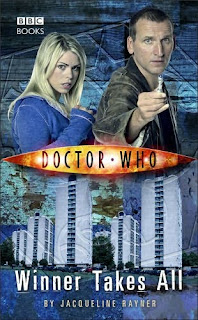 Winner Takes All
By: Jacqueline Rayner
Publisher: BBC Books
ISBN: 0-563-48627-9
About the book:
Rose and the Doctor return to present-day Earth, and become intrigued by the latest craze – the video game Death to Mantodeans. Is it as harmless as it seems? And why are so many local people going on holiday and never returning?
Meanwhile, on another world, an alien war is raging. The Quevvils need to find new means of attacking the ruthless Mantodeans. Searching the galaxy for cunning, warlike but gullible allies, they find the ideal soldiers – on Earth.
Will Rose be able to save her family and friends from the alien threat? And can the Doctor play the game to the end – and win?
Review:
Winner Takes All is only my second Doctor Who read, and my first to feature the adventures of the ninth Doctor (Christopher Eccleston) and Rose (Billie Piper). Rose convinces the Doctor to make a quick trip back to present-day Earth to visit her mother, Jackie, who’s just won a holiday in a sweepstakes competition. The Doctor, who has little patience for Rose’s family and her on-again, off-again boyfriend Mickey, soon suspects that this trip to Earth may not be wasted time after all. The newest videogame craze, Death to Mantodeans, is taking Rose’s neighborhood by storm, and when people start disappearing – including Jackie – the game turns out to be a very real, very alien threat to humans. Since Christopher Eccleston only brought his unique and unforgettable spin to the Doctor’s character for only one season, it’s nice to have additional adventures available that help flesh out his time and relationship with Rose. This story itself started off a tad slowly for me, and it took a couple of chapters for me to really get “hooked.” Once Rose and the Doctor reach the Mantodean stronghold for the final showdown, Rayner had my attention – particularly in the superb way she revealed just how much Rose’s friendship has grown to mean to the Doctor over the course of their time together. Rayner does a fantastic job with all of the series’ character voices – the Doctor, Rose, Jackie, and Mickey are all true to character and fit seamlessly within the context of how they are portrayed on the show. The new characters – especially Robbie, with his Harry Potter-esque fantasy life – fit well within the context of the story and interact well with the canon characters. While porcupine-like aliens are a trifle silly, even by Who standards IMO, this novel works immensely well as a ninth Doctor adventure and I – somewhat surprisingly – thoroughly enjoyed it.
Posted by Unknown at 6:08 PM