Review: Whisper on the Wind by Maureen Lang 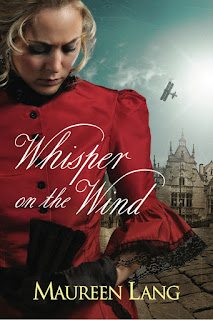 Wealthy and privileged Isa Lassone and her parents escaped the German onslaught that would ultimately overwhelm her beloved Belgium at the start of the Great War. But her freedom exacted a steep emotional toll, for Isa was abandoning not only her home but her heart, leaving behind Genny, the innkeeper's wife who practically raised her and whose son, Edward, Isa's loved since childhood. Against all reason and advice Isa makes arrangements to sneak back into Belgium with enough gold and jewels to successfully smuggle those she loves across the border, far from their German oppressors. But when Isa arrives with her unexpected treasure, the welcome she receives is far cooler than she'd hoped -- Edward, stripped of his once-vibrant faith thanks the horrors of war, refuses to leave Brussels, determined to sacrifice his life if need be for the resistance newspaper La Libre Belgique.

Despite Isa's brave if foolhardy journey into occupied territory, Edward continues to view her as nothing more than a spoiled child, a product of society-obsessed parents sure to buckle under the rigors of life in occupied Brussels, stripped of the privileged lifestyle her class once held dear. When Edward refuses to abandon his resistance work, Isa seizes the chance to remain, determined to prove to Edward that in the two years that have elapsed since the start of the war she's become a woman worthy of his love and respect. But with the German Army determined to destroy the voice of the resistance paper and all who support it, Isa's faith in her God and her cause are brutally tested. For the price of her hopes and girlish dreams, the price of resistance may demand nothing less than her very life.

After recently finishing Look to the East, the first installment in The Great War series which told the story of Isa's brother Charles, I was eager to continue my exploration of Lang's fiction. While Charles's story of finding danger and romance behind enemy lines is powerfully-rendered on the page, characterization and pacing issues left me hungry for more fully-rounded characters and a more action-driven plot. Happily, Lang's second outing featuring a member of the Lassone family delivers on all fronts. If one sets aside the incredulity with which Isa's audacious action at the beginning of the novel must be met -- I find it impossible to believe that a young woman of her breeding and standing could decamp to an occupied country with so little remark or regard for those she leaves behind -- Whisper on the Wind is nothing less than a thoroughly enjoyable tale of intrigue, danger, and romance against the backdrop of a war-torn world.

Though Isa can at times seem incredibly foolish and headstrong, I was quickly able to forgive her penchant for viewing her role as a "resistance heroine" during wartime with rose-colored glasses. Her youthful enthusiasm and determination to live out the tenants of her faith make for an appealing character, one whose moxie I cannot help but admire. Likewise, Edward's determination to play a vibrant role in the dangerous resistance community, driven by a desire to avenge the horrors he's witnessed under the occupation is compellingly sketched on the page. While not exactly a spy per se, Edward's work with La Libre Belgique lends the narrative all the drama and intrigue of a spy story, since his work necessitates false identities, safe houses, and a loosely-connected, sprawling network of ordinary men and women willing to make the ultimate sacrifice for the cause of Belgian freedom.

While this is very much Isa and Edward's story, Lang introduces a secondary romance that completely captured my heart. Genny, widowed when a German bullet took her husband's life, is forced to keep a wounded German major distracted from Isa and Edward's illegal newspaper work. Max, billeted at Isa's one-time family home since his injury, finds himself re-evaluating his life and work following two years of war that cost him the lives of his sons, a foot, and his wife's sanity. Against her better judgement, Genny finds herself drawn to the major's quiet strength, and the two erstwhile enemies find themselves drawing ever closer as the bonds of their shared faith overcome the politics of wartime. Forbidden romance between two would-be enemies? I am SO THERE. The restrained passion with which Lang paints Genny and Max's relationship is breathtakingly sweet, and Max's deeply-rooted sense of honor is swoon-worthy. This couple is so good they nearly steal the show -- a masterful example of peopling one's world with vibrant, memorable secondary characters.

One of Lang's greatest strengths in both Whisper on the Wind and its predecessor is the powerful manner in which she explores what it means to be a believer on both sides of the conflict. Rather than than succumbing to the temptation to make those on either side of the conflict either wholly "good" or "evil," Lang's three-dimensional characterizations explore what it means to literally love one's enemy, to place the call to faith and love before prejudice and hatred. When everything within Genny and Isa screams to deny any kinship with one of their loathed German oppressors, Max's quiet faith forces them to acknowledge a commonality stronger than national loyalty. And therein lies the power of Lang's narrative -- by forcing those on opposite sides of the conflict to recognize a spiritual kinship, she underscores the shattering, tragic, very human cost of the conflict.

Whispers on the Wind is one of the best war-set inspy historicals I've read in years, reminiscent of the Thoenes' classic Zion Covenant series in the colorful, absorbing manner in which it brings history to life. By peppering the narrative with accounts of Edith Cavell, a British nurse executed for helping Allied soldiers escape German detection, and the efforts of harried American ambassador Brad Whitlock to aide the Belgian people, and incorporating the actual resistance newspaper, La Libre Belgique into the storyline, Lang adds authenticity and atmosphere to a tale rife with intrigue and danger. Lang's grasp of the history and time period are stellar, resulting in a thoroughly absorbing read. With her well-drawn characterizations, a tightly-plotted storyline, and deft handling of action sequences, this is my favorite Lang novel yet. A richly-drawn, romantic, and thought-provoking tale of faith and honor in a world at war, Whisper on the Wind is a gorgeously-rendered tapestry of a pivotal moment in history vibrantly re-created, where faith and fear collide in a world bent on destruction. If this is what Lang is capable of, I cannot wait to read more of her work!

The German Imperial Army may have conquered Belgium on its march through Europe, but it can't crush their spirit. An underground newspaper surfaces to keep patriotism alive and bring hope and real news of the war to the occupied country. It may be a whisper among the shouts of the german army, but it's a thorn in their side nonetheless, and Edward Kirkland will do anything to keep it in print -- even risk his life.

Isa Lassone's family fled Europe at the first rumblings of war. Now, two years later, she sneaks back across enemy lines, determined to rescue Edward -- the man she has loved from afar since she was a child.

But will he ever see her as more than the wealthy, silly girl his mother once cared for as a daughter?

When Edward refuses to leave, so does Isa, and soon she is drawn into his dangerous double life. As the Germans close in, Edward realizes he's put more at risk than he'd planned...especially the beautiful, smart, yet obstinate young woman who has inconveniently managed to work her way into his life -- and into his heart.
Posted by Unknown at 4:50 PM

Thanks so very much for this lovely and well written review. It's been a while since I wrote Whisper on the Wind, but your impressions of it reminded me of why I enjoyed creating that story. Thanks so much!

All the best to you.

@Maureen - Thank you SO much for stopping by and commenting! I just loved this book and can't believe how long it took me to get around to reading it! I'm very much looking forward to exploring your other books. :)