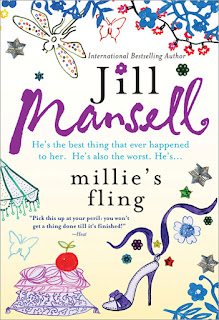 When Millie bolted from her boyfriend's oh-so-romantic proposal in Lover's Lane that they move in together (the cheapskate just wanted to save money on his rent) to the side of a would-be jumper, she little realized that her reflexive action would change her life forever. That would-be jumper was best-selling romance novelist Orla Hart, determined to end it all over the heartbreak of her husband's latest affair. But Millie convinced her to give life a second chance -- and when the flamboyant, larger-than-life Orla takes stock of her career and Millie's (lack of a) love life, she concocts an outrageous plan. Millie will be the fictionalized subject of her next book, a literary, true-to-life account of a working class girl's struggle to find love. When Millie first accepted Orla's offer it was merely as a lark -- but having a multi-millionaire author as one's fairy godmother proves more complicated than she'd imagined. Soon Millie is juggling more male attention -- from more unlikely quarters -- than she's seen in an age, but when the one man who actually makes her heart leap isn't a part of Orla's plotline, will she ever realize her own happily ever after?

People, sometimes nothing of a chick lit will do. And if you're at all like me, an Anglophile at heart, a British chick lit is a dream come true. After seeing reviews of Mansell's titles around the blogosphere and purchasing an e-book or two on sale (and promptly losing track of the titles in my Kindle's packed files), I finally decided the holiday weekend was the perfect time to give one of Mansell's novels a try -- and goodness did that risk pay off in spades.

Millie's Fling is a delightful, frothy confection of a novel, replete with humor, misunderstandings (both comic and heart-breaking),and romance. Clocking in at roughly five hundred pages, Millie's Fling is quite a bit longer than I'm used to when it comes to breezy, entertaining fiction of this ilk -- and honestly it could have used a bit of judicial editing to tighten the storyline. But when you're having such fun indulging in pure, fluffy escapism it's hard to fault story length when you've become so wholly immersed in the story's world, with characters who, foibles and all, have become friends.

Mansell as an apparent knack for peopling her novels with delightfully zany, very human characters, relatable in both their triumphs and heartaches. And here, at least, she favors large casts of characters -- for though this novel is called Millie's Fling, that quickly proves to be something of a misnomer. This is hardly a chick lit about one woman's search for love and fulfillment -- in a welcome turn significant page time is given to her entire circle of acquaintance. Her benefactress-cum-employer Orla and her struggling marriage, her housemate Hester and her romantic travails, her affably eccentric, divorced parents, and all of the men who dance in and out of this circle of women whose lives are rife with romantic possibilities receive significant page time. More than one woman's story, this little novel could perhaps be more aptly likened to an ensemble comedy like the film Love Actually -- this is a novel love wherein each experience is as unique and fully realized as the colorful characters that spring from its pages.

While the novel started a bit slowly, once the characters and premise where established the pace picked up and my fingers flew through the pages. Like comfort food or, better yet, chocolate, Millie's Fling is pure, unadulterated escapism at its finest. This is a novel and world that is a joy to lose oneself in, peopled with characters you can't help but love (even when they're incredibly stupid) and a few twists that may surprise you. I absolutely love Mansell's sense of humor and laughed out loud more than once descriptiosn of between Millie's job as a gorilla costume-wearing kissogram to Orla's well-meaning attempts at matchmaking (and Orla's payoff at the end of the novel? PRICELESS). The perfect summer read, for sheer fun my introduction to Mansell's fiction cannot be beat -- and I'll definitely be checking out her other novels sooner rather than later.

He's the best thing that ever happened to her. He's also the worst. He's Millie's Fling.

From one of the premiere contemporary authors in the UK, here is a fun and romantic tale that proves the road to matchmaking hilarity is paved with good intentions.

Bestselling novelist Orla Hart owes her life to her friend Millie Brady, whose rotten boyfriend has just left her. So Orla invites Millie to Cornwall, where Millie looks forward to a summer without any dating whatsoever. But Orla envisions Millie as the heroine of her next novel and decides to find Millie the man of her dreams. Except the two women have drastically different ideas about what kind of guy that should be.

With Orla and Millie working at cross-purposes, and a dashing but bewildered hero stuck in the middle, the summer will turn out to be unforgettable for all concerned...
Posted by Unknown at 6:00 PM