Last week PBS unveiled its slate of new summer programming which you can read all about here -- but obviously the most important part of that press release has to do with Masterpiece Mystery! While I am heart-broken, positively BEREFT over the fact that this summer marks Inspector Lewis's final season, I can't wait for more Lewis and Hathaway followed by FOUR new Endeavour episodes! Here's the schedule and brief episode descriptions: 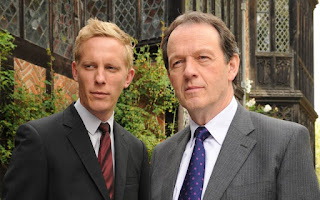 “Down Among the Fearful”  – June 16
When a psychic is found murdered, Inspector Lewis and DS Hathaway discover that the victim is really an Oxford psychology research fellow. As they probe further, the truth behind the psychic’s double life unravels, revealing numerous suspects.

“The Ramblin’ Boy” – June 23
With DS Hathaway on holiday, Inspector Lewis is assigned a new partner to investigate the discovery of an elderly man’s body in a field. Finding that the man had already been embalmed, the inquiry leads to a funeral home and those connected to it, including one of Lewis’ former colleagues. Peter Davison (“Doctor Who”) guest stars.

“Intelligent Design” – June 30
Lewis and Hathaway are called in to examine the brutal death of a chemistry professor — recently released from prison — who may be connected to the discovery of a murdered Oxford student lost for 15 years. As more casualties and suspects emerge, Lewis considers his future on the force. Edward Fox (“Miss Marple,” “Foyle’s War”) guest stars. 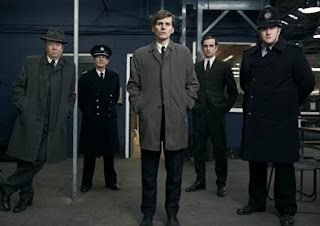 MASTERPIECE MYSTERY! “Endeavour, Series 1”
Before Inspector Morse, there was the rookie Detective Constable Endeavour Morse, fed up with police work and ready to nip his career in the bud by handing in his resignation. That is, until a murder turned up that only he could solve. Shaun Evans stars as the young Detective Constable Endeavour Morse, before his signature red Jaguar but with his deductive powers already running in high gear. Sundays, July 7-28, 9:00-10:30 p.m. ET


“Girl” – July 7
DC Morse (Shaun Evans) and DI Thursday (Roger Allam) investigate burgled gas meters, the sudden death of a young secretarial student and a string of post office robberies, confounding the solution to a pair of violent murders. Could Morse’s future on the force be in jeopardy?

“Fugue” – July 14
Morse and Thursday are confronted with a new breed of murderer, as a string of Oxford homicides continues with no end in sight. The entire police department is working round the clock and a special expert comes on to assist, but Morse’s love of opera may be the key to stopping the killing …

“Rocket” – July 21
A royal visit to a family-owned munitions factory begins as a proud occasion for the people of Oxford, but the joyous day ends with murder. Morse delves into the family’s murky past, as well as his own, as he attempts to uncover the culprit before more lives are lost.

“Home” – July 28
While studying for his upcoming sergeant’s exam, Morse investigates the hit-and-run death of an eminent Oxford professor. The pressure mounts with his father’s illness and the appearance of an enemy threatening to reveal aspects of Inspector Thursday’s past. In the end, Morse must choose between the responsibilities of his job and loyalty to his mentor.
Posted by Unknown at 3:43 PM

Now that I know Roger Allam is in "Endeavour," I need to check it out!

@Gina - Ohmygoodness, you didn't know? *friendfail* He is FAB in the pilot ep, you'll love it!

I'm still skeptical about Endeavor. Like after Hathaway there will be this gaping hole in my chest and I'm supposed to fill it with Endeavor?? I don't think I can do it.

Thanks for sharing, Ruth!

This makes me happy. I guess one of these days I'm going to have to buckle down and watch the Inspector Morse series, too!

@Tasha - Oh, Hathaway's absence is going to leave a big, gaping whole in my heart too (even moreso since yesterday I accidentally stumbled on a HUGE SPOILER for the end of the series, gah!!! *headdesk*). But I really loved the first Endeavour film...and I kinda have this thing for Morse now, so I'm hopeful. :) STAY STRONG!!!

@Mrs. Pedersen - I hope you will give them a try & let me know what you think!

Don't be mad but... I've not seen either of these series. Guess I am too busy anticipating Sherlock and 'Foyle.' ;)

Thanks for sharing this, Ruth!

@Rissi - Oh Rissi Rissi Rissi...you have lots of good stuff to catch up on, my friend! :)

Ooh, can't wait for this! Although it will certainly be bittersweet, knowing the Lewis/Hathaway partnership is coming to an end (ie. since the series has ended).

On a totally unrelated note, I thought you might enjoy this video of Old/New Spock:http://www.youtube.com/watch?v=WPkByAkAdZs&feature=share

Yay, Zachary Quinto! He has such a winsome presence, don't you think?

I've been meaning to watch some of their Masterpiece Mysteries but I've not had time with watching Merlin and Doctor Who. I will have to add them to my list though for when I finish Merlin.

I had heard something about this being the last series of Lewis but I guess I was in denial and ignoring it. Now I feel like I'm hesitant to watch b/c I'm going to be devastated at the end! Silly, I know... but I don't want to think about no more Hathaway.

@Kate - You are so not kidding about this upcoming season of Lewis being bittersweet. I'm still in denial. =P And thanks for the link!

@Lori - Heck I knew about it for months and I'm still in denial. No more Hathaway? TRAGIC. :(