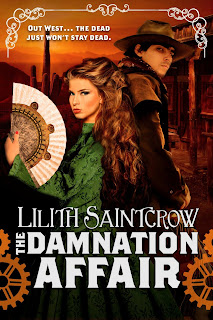 Only one thing could induce Miss Catherine Barrowe-Browne to forsake the comforts of civilized Boston and head Westron (West) -- the hope of finding her missing, impetuous brother Robbie. She applies for the position of schoolteacher in the town of Damnation, a godforsaken corner of the Westron territory every bit as uninviting as its name. The children are out-of-control hellions, the townspeople without culture, and the sheriff an infuriating (and attractive) enigma. When the undead breach the boundaries of the charter protecting the town, Cat quickly realizes that darker forces than she'd ever dreamed may have ensnared her brother, as a dark threat stalks Damnation's citizens, determined to destroy anyone in its way.

Sheriff Jack Gabriel headed Westron to escape his past, cloaking his identity behind a lawman's badge, a lazy drawl, and a manner that brooked no questions. He never expected the new schoolmarm to be so pretty or so wholly unsuited for life in a town constantly stalked by the threat of an undead uprising. The more he gets to know the delightfully stubborn Cat, the more he begins to dream of a future outside Damnation's borders. But dark forces threaten Jack's plans, and the cursed mancey (magic) swirling around Cat's search for her missing brother threatens to exact a sacrifice far greater than either is willing to pay.

After falling in love with Saintcrow's first entertaining and evocative steampunnk recreation of Victorian London in The Iron Wyrm Affair, I was left eager for sequels. In an interesting twist, Saintcrow chose to bridge the release of her first and second Bannon & Clare books with this full-length e-book set in the same universe, but halfway across the world with an entirely new cast of characters. The time period may be the same, but the manner in which magic, sorcery, and steampunk technology is employed is wholly new, fresh, and engaging. In the nineteenth-century Westron "New World" that passes for America, the culture of magic is rawer, less refined, and therefore more unpredictable. Saintcrow also adds a layer of religious faith, marrying a traditional 19th-century Christian worldview with the rules of mancey and charter-symbols that make her world-building so richly-drawn and fascinating.

Now I typically avoid prairie-themed romances, but Saintcrow's twisted take on the tropes of the genre is irresistable. Cat is the missish schoolmarm, wholly unprepared for the rigors of Westron life -- but determined to thrive and fearless when it comes to utilizing her magic Practicality, even if it means sacrificing her Reputation. Jack is the dedicated lawman, deliciously uncertain around women of Cat's ilk, and hiding a secret that threatens to destroy his place in Damnation. The two spar constantly, and electric chemistry between two such polar opposites kept my fingers flying to turn pages. This tale is more romance-heavy than its predecessor, and given the secrets involved and threats standing in the way of a happily ever after, I became quickly invested in the future of their will-they-or-won't-they relationship.

The Damnation Affair is a fast-paced, romantic adventure set in Saintcrow's deliciously eclectic, revisionist 19th-century world. While the impetus behind the undead menace is somewhat hazily realized, I loved Saintcrow's twist on zombie lore (a tad reminiscent of the recent film Warm Bodies) and its use as a threat in territories barely settled is wholly fitting to the tenor of the time period. While I enjoyed The Iron Wyrm Affair, I absolutely loved this book. Perfectly paced, thoroughly entertaining, and peopled with engaging characters set against the backdrop of a rich mythology, The Damnation Affair is my favorite Saintcrow novel yet. I loved this book -- and can only, desperately hope that Saintcrow will revisit Cat & Jack in sequels.

The West is a wild place, where the poison wind blows and the dead walk. But there is gold, and whiskey, and enough room for a man to forget what he once was--until he no longer can.

Jack Gabriel's been the sheriff in Damnation almost since the town grew out of the dust and the mud. He keeps the peace--sort of--and rides the circuit every dawn and dusk with the chartermage, making sure the wilderness doesn't seep into their fragile attempt at civilization. Away from the cities clinging to the New World's eastern rim, he doesn't remember what he was. At least, not much.

But Damnation is growing, and along comes a schoolmarm. Catherine Barrowe is a right proper Boston miss, and it's a mystery why she would choose this town where everything scandalous and dangerous is probably too much for a quality lady like her. Sometimes the sheriff wonders why she came out West--because everyone who does is running from something. He doesn't realize Cat may be prickly, delicate, and proper, but she is also determined. She's in Damnation to find her wayward older brother Robbie, whose letters were full of dark hints about gold, trouble...and something about a claim.

In a West where charm and charter live alongside clockwork and cold steel, where hot lead kills your enemy but it takes a blessing to make his corpse stay down, Cat will keep digging until she finds her brother. If Jack knew what she was after, he could solve the mystery--because he was the one who killed Robbie.

The thing is, Cat's brother just won't stay dead, and the undead are rising with him...
Posted by Unknown at 7:23 AM