Review: Devil in the Smoke by Justin Richards 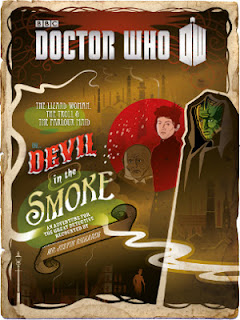 Released as a prequel to the 2012 Doctor Who Christmas special "The Snowmen" (a personal favorite), Devil in the Smoke explores the presence and activities of "The Great Intelligence" in Victorian London prior to events that introduced a depressed, embittered Doctor to a governess named Clara, also known as the impossible girl. While the Doctor doesn't feature in this short tale, it is nonetheless one of the stronger Who novellas I've read, thanks in no small part to its focus on the trio of Vastra, Jenny, and Strax, three of the more colorful and frankly interesting supporting characters that have been introduced during Matt Smith's run as Eleven.

The tale opens with a positively Dickensian touch -- two young boys, Harry and Jim, sweeping snow from the workhouse yard, steal a few moments in which to build a snowman. But their stolen moment of play is transformed into horror when a dead woman emerges from within the snowman they just built, setting into motion a chain of events that threatens not only their lives but the very existence of the entire world. Clearly it's a case that calls for the considerable investigative powers of the Great Detective.

And so enters Madame Vastra, the green-skinned Silurian from "A Good Man Goes to War" who has made a life for herself in Victorian London, as the veiled and enigmatic Great Detective. I LOVED this aspect of the Christmas special, as since Moffat is showrunner for both Who and Sherlock, it seemed inevitable that at some point the two worlds would cross paths. In introducing Vastra as the "real life" Great Detective of literary legend, Moffat cleverly brings his Holmes-related duties to bear in the Doctor's universe. And I loved that he turns expectations on their head by having Vastra, a female alien,claim the title of Great Detective when going into the concept I would've expected the Doctor to lay claim to that honor -- and relish it.

Richards is one of the better and most consistently reliable novelists to work in the Who universe, and here he delivers a fast-paced, engaging story that not only expands on events of "The Snowmen" but makes a compelling case for more appearances by the trio of Vastra, Jenny, and Strax -- if not their own spin-off show. *wink* Playing with the tropes of both the Who universe and Holmesian fiction, The Devil in the Smoke is engaging novella with a surprisingly literary tone for fiction of this ilk. Marred only by its short length and several typos, Devil in the Smoke is a lightly diverting, worthwhile entry in the ever-expanding world of Who-related fiction.

Madame Vastra, the fabled Lizard Woman of Paternoster Row, knew death in many shapes and forms. But perhaps one of the most bizarre of these was death by snow...


On a cold day in December, two young boys, tired of sweeping snow from the workhouse yard, decide to build a snowman - and are confronted with a strange and grisly mystery. In horrified fascination, they watch as their snowman begins to bleed...

The search for answers to this impossible event will plunge Harry into the most hazardous - and exhilarating - adventure of his life. He will encounter a hideous troll. He will dine with a mysterious parlour maid. And he will help the Great Detective, Madame Vastra, save the world from the terrifying Devil in the Smoke.
Posted by Unknown at 6:51 PM

The episodes with Vastra, Jenny, and Strax were my favorite of this season.

@Tasha - Mine too (well except for the first episode after the Christmas special...I thought that one was pretty awesome). :)