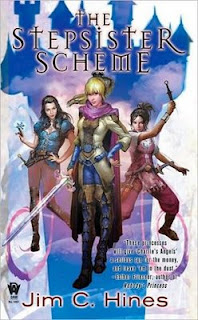 Cinderella–whose real name is Danielle Whiteshore (nee Danielle de Glas)–does marry Prince Armand.  And if you can ignore the pigeon incident, their wedding is a dream come true.

But not long after the “happily ever after,” Danielle is attacked by her stepsister Charlotte, who suddenly has all sorts of magic to call upon.  And though Talia–otherwise known as Sleeping Beauty–comes to the rescue (she’s a martial arts master, and all those fairy blessings make her almost unbeatable), Charlotte gets away.

That’s when Danielle discovers a number of disturbing facts: Armand has been kidnapped and taken to the realm of the Fairies; Danielle is pregnant with his child; and the Queen has her own very secret service that consists of Talia and Snow (White, of course).  Snow is an expert at mirror magic and heavy duty flirting.
Can the three princesses track down Armand and extract both the prince and themselves from the clutches of some of fantasyland’s most nefarious villains?

What would happen if an author went back to the darker themes of the original fairy tales for his plots, and then crossed the Disney princesses with Charlie's Angels? What's delivered is The Stepsister Scheme, a whole new take on what happened to Cinderella and her prince after the wedding. And with Jim C. Hines penning the tale readers can bet it won't be and they lived happily ever after.

I adore fairy tales, and am always on the lookout for fairy tale retellings that seek to breathe fresh life into the bones of a classic, well-known tale. Thanks to a recent GoodReads friend request, I stumbled upon The Stepsister Scheme, the first novel in Jim C. Hines' Princess series. With its graphic novel-style cover artwork featuring three princesses ready for battle, I was immediately intrigued, as the artwork promises that are most assuredly not the princesses of classic lore. For the first volume in his Princess series, author Jim C. Hines returns some of literature's most famous heroines to their darker Grimm roots. Adding a healthy dash of modern sensibility, wry humor, and a set-up reminiscent of Charlie's Angels, Hines' princesses are no wilting wallflowers waiting to be rescued -- rather they are on a quest to reclaim their lives from the sanitized, romantic tales that have arisen around rumors of their respective pasts.

As the title hints, The Stepsister Scheme is primarily centered on Danielle Whiteshore, the real Cinderella (in a nice touch her father was a master glass artisan), attempting to adjust to her new life as a wife and princess. But shedding her past, riddled with emotional and physical abuses, proves difficult, and Danielle has trouble reconciling her previous hardscrabble existence with her stepmother and stepsisters with the privilege and power it is now her right to command. Following an attempted assassination attempt by her suddenly magic-wielding stepsister Charlotte, Danielle is introduced to a world she never dreamed existed, where her mother-in-law, Queen Bea, commands a duo of elite women -- Snow White, an expert in all things magical, and Talia, otherwise known as Sleeping Beauty, a fighting expert thanks to the fairies' gifts of preternatural grace and intuition. Snow and Talia's unique skill sets make them the ideal agents to serve the queen on dangerous assignments -- and when the attempt on Danielle's life reveals a plot to kidnap her husband and overthrow the kingdom, she joins the pair determined to save her marriage and prove her mettle as a fighting princess.

I loved the multitude of nods to each princess's original story that Hines incorporates into his wildly fractured reimagining. Snow's nemesis -- this time her mother -- is tortured by being forced to dance in red-hot shoes as in the Grimm version. There's also a tragically doomed romance with a handsome huntsman and a multitude of mirrors replete with magical uses. Talia views her fairy gifts as more of a curse than a blessing, and while a prince figures in her reawakening, he's less noble and far more lecherous pervert. I loved the touch of a "spindle whip" being Talia's weapon of choice -- that was a nice nod the spindle lore in the original tale. But my favorite nod to Grimm involved Danielle's story, which saw Hines keep "Cinderwench's" guardian angel in the form of her mother's spirit -- first trapped within a magical tree, then a glass (!!) sword, as well as the vicious bird attack her stepsisters experience at the royal wedding.

While this is an undeniably fun concept, where this debut in the series falters is in character development. Danielle is the only princess I consistently felt any sympathy towards or inclination to cheer on as she fought to rescue her husband and reclaim her happy ending from the machinations of her stepsisters. Snow and Talia suffer from unfortunate stereotyping for much of the novel -- Snow is a sexed-up flirt while Talia is the embittered, rude warrior (and in a "twist" you can see coming a mile off, has unrequited feelings for Snow...ergh). Much is made of their own dark histories, but it isn't until the final third of the novel that their backstories are explored, finally lending the them some level of much-needed depth. Despite the character development issues and an occasional want of plot focus, Hines' world-building sparks with life. This is a fresh, energetic, and oft-times wonderfully snarky take on fairy tale retellings that shows great promise for future volumes.
Posted by Unknown at 8:12 AM

Hey, I got this book from the library last year! It was a little too shallow for me. Fighting princesses is pretty much the only idea going on in this novel.

@Tasha B. - Totally get where you're coming from. I am cutting this one some slack because of the novelty factor (gave it 3.5 stars), but if the sequel doesn't show greater depth I'll be disappointed!