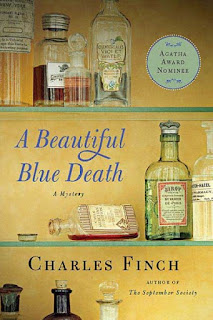 On any given day in London, all Charles Lenox, Victorian gentleman and armchair explorer, wants to do is relax in his private study with a cup of tea, a roaring fire and a good book. But when his lifelong friend Lady Jane asks for his help, Lenox cannot resist another chance to unravel a mystery, even if it means trudging through the snow to her townhouse next door.


One of Jane’s former servants, Prudence Smith, is dead – an apparent suicide. But Lenox suspects something far more sinister: murder, by a rare and deadly poison. The house where the girl worked is full of suspects, and though Prudence dabbled with the hearts of more than a few men, Lenox is baffled by an elusive lack of motive in the girl’s death.
When another body turns up during the London season’s most fashionable ball, Lenox must untangle a web of loyalties and animosities. Was it jealousy that killed Prudence? Or was it something else entirely, something that Lenox alone can uncover before the killer strikes again – disturbingly close to home?

Charles Lenox is a consummate Victorian gentleman -- fond of good books and good food, pleasant company, and a warm fire. But unlike most gentlemen of his social class, Lenox doesn't just visit his clubs and attend dinner parties -- he solves crimes. His wealth and status allow him to pursue his twin passions of academic research and travel as well as staying abreast of the latest in investigative methods and research, earning him a reputation for resourcefulness, discretion, and results. When Lady Jane Grey, his closest friend and neighbor, learns that her one-time maid, Prue, has died in suspicious circumstances, she turns to Charles for assistance. Unable to resist the charms of his lovely neighbor and the thrill of a new case, Charles accepts her commission and is thrust into the world of the enigmatic Barnard's household, where nothing is as it seems and everyone is suspect. As the director of the Royal Mint, Barnard is eager to see his maid's death rule a suicide. But when Lenox learns that Prue died from bella indigo -- an extremely rare poison known as  the "beautiful blue" -- all evidence points to a killer with money and connections, and a plot that if left unchecked could shake the foundations of the British economy.

Finch's debut introducing gentleman sleuth Charles Lenox is a cozy mystery lover's delight, replete with colorful characters, shadowy motives, and an investigator whose charm, persistence, and dedication to his craft promise a tidy resolution by the final chapter. Lenox is a charmer, thoroughly aristocratic in his manner and morals but wonderfully accessible, a bachelor set in his ways with unique academic interests and a determination to ferret out the truth of a case, no matter the cost. A cross between Sayers' Lord Peter Wimsey, with a dash of Wodehouse-ian warmth and humor, the character of Lenox is without a doubt this novel's greatest strength. A gentleman in every sense of the term, Lenox's warmth and moral center, his well-placed idiosyncrasies, make him a wonderfully human protagonist -- not particularly charismatic (at this juncture, at any rate), his appeal lies in his unabashed, straightforward sincerity and unflagging loyalty to those individuals and causes closest to his heart.

Compared to Lenox, the other characters populating his world are rather colorless, with only hints of promise and greater depth beneath the barest of hints granted on the page. McConnell, the tortured Scottish doctor and Lenox's forensic expert of choice, has a tantalizing backstory that is only hinted at. One hopes that in subsequent volumes of the series Finch explores McConnell's character and marriage to his polar opposite -- the vivacious Toto, a leading light in Lenox's social circle. Graham, Lenox's indefatigable butler, has a flair for investigative work and an unexpectedly close past with his employer, but his character remains frustratingly just out of reach, solely defined by his loyalty with the impetus for such left undefined. And while there is the promise of romance between Lenox and his long-time friend Lady Jane, sadly she is a cookie-cutter, colorless presence -- supposedly much in-demand socially, I was left with no idea why -- Lenox likes her and thinks she's pretty, but that one-sided, shallow perspective does not a compelling relationship make.

Finch possesses a promising flair for bringing late 18th-century London to life, from the rich comforts of Lenox's home to the apothecaries and slums he visits as part of his investigation. Plot-wise, the storyline could use some finesse -- Lenox spends a great deal of time mulling over this clue or that development, which makes for a pleasant, leisurely-paced read as he is such a likeable fellow. But the text suffers from an inordinate amount of "info-dumping," a good portion of the final quarter of the novel devoted to Lenox recapping the case and his suddenly successful deductions. With more showing versus telling, and greater attention paid to character development beyond Lenox and a more tightly-plotted story, the pieces are in place for an enjoyable series -- and seeing that this novel is Finch's debut, I have hopes that subsequent outings show greater polish. A Beautiful Blue Death is a pleasant, light-weight diversion, sure to appeal to fans of Wimsey or Poirot. Though the mechanics of Finch's debut mystery may be quickly forgotten, the warmth, humor, and promise contained within the character of Lenox marks this as a the introduction of a memorable gentleman sleuth with whom I look forward to whiling away many more lazy afternoons.
Posted by Unknown at 9:14 AM

This one sounds good. I've found that I often prefer subsequent books if I don't love the first one. Hopefully this will be the case with this one!

Have a Happy New Year, Ruth!

@Holly - I totally understand that! I really liked Lenox as a character -- this book just suffered from some debut "hiccups" I think. ;)

Happy New Year to you as well!