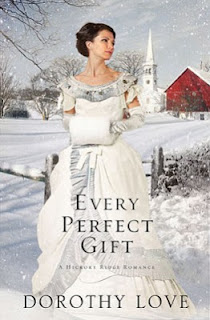 Ethan and Sophie long to share a future together. But the secrets they’re not sharing could tear them apart.

Sophie Caldwell has returned to Hickory Ridge, Tennessee, after years away. Despite the heartaches of her childhood, Sophie is determined to make a home, and a name, for herself in the growing town. A gifted writer, she plans to resurrect the local newspaper that so enchanted her as a girl.

Ethan Heyward’s idyllic childhood was shattered by a tragedy he has spent years trying to forget. An accomplished businessman and architect, he has built a majestic resort in the mountains above Hickory Ridge, drawing wealthy tourists from all over the country.

When Sophie interviews Ethan for the paper, he is impressed with her intelligence and astounded by her beauty. She’s equally intrigued but fears he will reject her if he learns about her shadowed past. Just as she summons the courage to tell him, Ethan’s own past unexpectedly and violently catches up with him, threatening not only his life but their budding romance.

Sophie Caldwell returns to Hickory Ridge, Tennessee, with a burning desire to prove herself to the town full of painful childhood memories. Her lack of antecedents haunted her dreams while her darker complexion earned taunts and accusations of a mixed-race heritage. When longed-for guardians swept into Sophie's life and took her with them to Texas, Sophie was finally able to escape the rumors swirling around her past and developed a forward-thinking interest in newspaper industry -- a previously male-dominated world where women were just beginning to make their mark. Determined to prove herself to the town that once shunned her, Sophie risks her savings and future on re-opening the now defunct Hickory Ridge newspaper. Once there she meets Ethan Heyward, the building manager and architect behind the new and exclusive Blue Smoke Resort. While Sophie and Ethan share an immediate attraction, simmering unrest among the resort workers and Ethan's reticence to share his past and his apparently exclusive racial views leave Sophie reluctant to be forthcoming about her own checkered background. Just as she summons the courage to share her feelings, violence explodes at the resort, threatening her future with Ethan and at the newspaper. With forces insistent on maintaining the status quo arrayed against them, can two burdened souls find the courage to share their fears and claim a vibrant future free from the burden of mistakes and regret?

Ever Perfect Gift is the third entry in Love's Hickory Ridge Romance series, but my first experience with her work. My impression of the series is that each novel stands alone, only loosely connected through setting and recurring characters -- and on that score this third installment only partially succeeds. It assumes a certain measure of knowledge regarding Sophie's past rather than firmly establishing her history and motivations within the pages of this novel. While Sophie's insecurities regarding her unknown parentage are certainly legitimate and compelling reasons for angst, nothing she encounters in this novel seems to warrant the near-constant replay of her childhood hurts. The townspeople are extraordinarily welcoming and arguably open-minded concerning the advent of a professional newspaperwoman in their midst. I love Sophie's atypical profession and her passion for the written word. The narrative is strongest when Sophie confronts and overcomes objections to her role or opinion, rather than the repetition of her childhood insecurities, which, given the lack of prejudice she encounters seem petulant and positively unwarranted.

Plot-wise Love is clearly capable of penning a tension-filled scene as shortly after Sophie's arrival in town she is able to witness and report on a workers' riot at the resort. Unfortunately after this rather spark-filled opening the novel's pace slows to a glacial crawl, with Sophie and Ethan alternately musing on their respective secrets and their attraction to each other. When the action resumes nearly two-thirds into the novel, with a fairly stunning confrontation with a stranger from Ethan's past (followed by a sketchily-explained and rather random blow against Sophie's paper), the rush to pack so much action and information about the previously mysterious Ethan lends the concluding third of the novel a somewhat disjointed feel -- instead of raising the stakes for our characters, the action feels forced. Ethan's history was actually pretty fascinating, but information-dump necessary to fit his entire backstory into the novel's final chapters drastically lessens the impact of his own compelling history.

While overall Every Perfect Gift didn't "click" with me as I'd hoped, Love has a flair for bringing small-towns to life on the page, as indeed the well-realized setting is one of the novel's greatest assets. There is also a great deal of potential within the backstories Love has penned for Ethan and Sophie -- and with greater development and tension, Love's ability to craft characters with compelling histories holds great promise for future work. I loved her supporting cast, especially Sophie's friend Gillie who seeks to establish an infirmary in Hickory Ridge, and the promise of a romance with a younger man (a refreshing plot twist!). Sure to appeal to fans of sweet romances (i.e., Janette Oke and Lori Wick), Every Perfect Gift showcases Love's affinity for crafting sparkling settings against which characters with great potential strive to realize their dreams.

Thanks to Litfuse for the review opportunity!
Posted by Unknown at 1:00 PM

Agree with you Ruth: This one didn't "click" for me either. It was okay but I probably won't be clamoring to read more of Love's novels.

You always write such fab, detailed reviews, girl. Good for you! :)

Iâ€™d like to say that you always offer valid information and I have been an fascinated reader of your site for quite some time. I wanted to say thankyou really :) for all the good work you do!
Yüz Germe