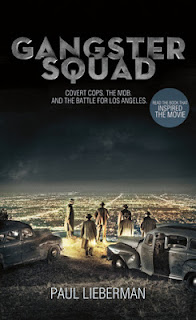 GANGSTER SQUAD chronicles the true story of the secretive police unit that waged an anything-goes war to drive Mickey Cohen and other hoodlums from Los Angeles after WWII. In 1946, the LAPD launched the Gangster Squad with eight men who met covertly on street corners and slept with Tommy guns under their beds. But for two cops, all that mattered was nailing the strutting gangster Mickey Cohen. Sgt. Jack O’Mara was a square-jawed church usher, Sgt. Jerry Wooters a cynical maverick. About all they had in common was their obsession. So O’Mara set a trap to prove Mickey was a killer. And Wooters formed an alliance with Mickey’s budding rival, Jack “The Enforcer” Whalen. Two cops -- two hoodlums.  Their fates collided in the closing days of the 1950s, when late one night “The Enforcer” confronted Mickey and his crew. The aftermath would shake both LA’s mob and police department, and signal the end of a defining era in the city’s history.

Warner Brothers developed the film Gangster Squad based on the research award-winning journalist Paul Lieberman conducted for this book, which reveals the unbelievable true stories behind the film. He spent more than a decade tracking down and interviewing surviving members of the real police unit as well as families and associates of the mobsters they pursued.  Gangster Squad is a tour-de-force narrative reminiscent of LA Confidential.

I adore film noir -- the shadow-drenched films of the 40s and 50s that brought to life a world inhabited by gangsters, femme fatales, and hard-boiled private eyes, double-crosses and shoot-outs, a murky cinematic world where the line between good and evil was more often than not blurred beyond recognition. The first time I heard of the upcoming film Gangster Squad was in the aftermath of the Aurora, CO theater shooting, when the trailer was pulled due to the fact that it contained scenes of a movie theater shoot-out (the sequence was subsequently cut and a new scene shot to take its place). I assumed the story was a fiction -- until I saw the trailer just over a week ago and absolutely fell in love with the look of the film. Generally speaking gangster pictures are a bit out of my viewing norm, but I am a total sucker for the look of the 40s and 50s and whatever else may be said about the upcoming film -- it has style in spades. When I learned that the film was based on the real-life exploits of LA-based gangster Mickey Cohen and the LAPD's secret "Gangster Squad," I knew I had to investigate the book that chronicling the LAPD's mid-century war on organized crime. And oh what a wild ride -- if nothing else Gangster Squad more than proves the old adage that the truth is stranger, and oft-times more compelling, than any fiction.

Journalist Paul Lieberman's 500-plus page account of the LAPD's Gangster Squad is a highly readable, page-turning account of the men whose shadowy crusade against the rise of organized crime in their city arguably changed the face of law enforcement forever. The Los Angeles of the early twentieth-century was a city on the cusp of great and profound change. With the rise of the film industry, LA was becoming an entertainment mecca -- and during the Depression years thousands sought their fortunes under California's sun-drenched skies. The advent of World War II brought a serious population boom to LA, as the city quickly swelled to become one of the top five most populated cities in America. But along with the burgeoning entertainment and industrial sectors came imports of a less desirable sort -- gangsters like Bugsy Siegel and Mickey Cohen who sought to establish gaming and protection racket empires of their own, set to rival their eastern counterparts in Chicago and New York. And thus ten-Chief C.B. Horrall greenlit the formation of the Gangster Squad, the elite, off-the-books, virtually invisible team was hand-picked for their brawn or their brains, and their willingness to completely dedicate themselves to ridding LA of the invading gangster menace.

What is perhaps most amazing about the Gangster Squad is the virtually unquestioned autonomy they were given in their assignment to investigate, tail, and harass the gangster element. Initially their only offices were two beat-up sedans wherein meetings were scheduled on shadowy corners and in vacant lots via coded messages. Since they weren't officially recognized (at least in the first years), they were given free rein to use any method at their disposal to clean up LA's streets -- unwarranted wire taps, their fists -- if a bookie or pimp was "encouraged" to leave town it was tallied a win, no matter the circumstances. What intrigued me most about the team was their pioneering investigative methods. Led by brilliant "bug man" Con Keeler, the squad pioneered new forms of electronic surveillance and wire tapping. And in an age when J. Edgar Hoover of the FBI refused to acknowledge  the existence of an organized mafia in America, the Gangster Squad was among the first to meticulously document the network of connections between LA operatives and their east coast counterparts, building massive handwritten dossiers on targets openly operating in the shadow of the law.

Lieberman's extensive exploration of the Gangster Squad's activities, its members (particularly straight-arrow John O'Mara and the roguish Jerry Wooters relative to Mickey Cohen), and their targets, is a highly readable, fast-paced account of a transformative era in the history of American law enforcement. Whether or  not you agree with their methodology, Gangster Squad is a fascinating examination of the lengths a group of men were willing to go to in order to stand in the gap for their family and city in peril from gangsters who regularly got away with murder. Lieberman's prose and colorful metaphors pack a punch suggestive of the likes of Chandler, bringing his history to life with a flair worthy of a noir classic. I do with a character list, index, and bibliography were included -- the foremost particularly since due to the scope of the history and Lieberman's not exactly linear storytelling it can be difficult to keep the players straight. That aside, for those intrigued by this tumultuous time period Gangster Squad is a fast-placed, not-to-be-missed thrill ride -- an absorbing and thought-provoking window into an explosive period of American history.
Posted by Unknown at 9:00 AM

I saw the movie preview of this one a couple weeks ago! I can't wait to see the movie. Right after that I borrowed the book from the library for my Father in law to read before me. Glad to hear it's a great book I can't wait to finally read it!
-Kimberly @ Turning the Pages

I don't usually get into books like this, but I'd definitely be interested in watching the movie. :)

@MissKimberlyStardust - Oh I'd love to read your thoughts on the book! It is a very fast read. :)

This isn't normally my genre, but I'm super curious about it now. Great review.

@Holly - LOL, it certainly isn't my norm either but I loved it. Thanks!