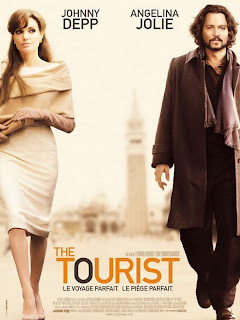 Ya'll know me, I simply cannot resist a good spy/caper flick. And 2010 has certainly delivered more than the normal share of caper-themed films (Knight and Day and Red were winners, while Killers fell far short of the mark). Happily, The Tourist falls into the winner category. I came *thisclose* to passing on seeing this one in theaters, but I just couldn't resist 1) Johnny Depp and 2) the gorgeous European settings, which reminded me of Charade and To Catch a Thief. In fact, The Tourist feels like it is very deliberately constructed with a "throwback" feel to it, reminding me of the days in classic Hollywood when gorgeous guys like Cary Grant would cross paths with femme fatales like Eva Marie Saint on cross-country trips (The Tourist will really make you want to rewatch North by Northwest, if you're at all wired like me *wink*). Seriously, is there anything more romantic than trains in movies?!

Anyways, if you've seen the film's trailer you have a pretty good idea of the storyline. Angelina Jolie plays Elise, the former lover of a mysterious man named Alexander who is wanted by just about every law enforcement agency you can imagine for some major tax evasion charges. Alexander sends Elise a message with very specific instructions - to board a train and choose a random man who resembles him in height, build, and coloring, and make the men who are following her belive they've reunited. Because you see, no one knows what Alexander looks like - since absconding with billions of dollars from a mobster that used him as a private banker, Alexander used some of that money to acquire a completely new face. Jolie's target of choice is mild-mannered Frank Tupelo, a math teacher from Wisconsin played by Depp. Things get unexpectedly dangerous for Frank when the mobsters on Alexander's trail take up the chase, determined to get their money back.

I love and adore Johnny Depp, but seriously, even the role of a math teacher from middle America seems to require more than the usual suspension of disbelief. *wink* Depp is NO "everyman" if you get my drift. But if you don't mind a minor SPOILER - all is not as it seems with the mild-mannered Frank. As far as Jolie goes, I have seen very few of her films - nothing against her, really, it's just that she doesn't typically make the type of movie I'm interested in in seeing, I guess. Here she's definitely channeling Grace Kelly or Audrey Hepburn. In every scene she's all elegance, classier than I think I've ever seen her on-screen. This is my favorite of her costumes, worn to a ball - I just adore this dress! 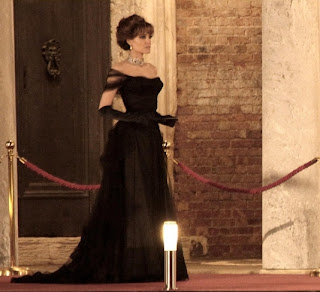 Now, I'm really torn as to how much detail to to go into about Frank and Elise's relationship. I don't know if the movie's really obvious and I was just going into the theater playing really dumb or what (*wink*), but there are two major twists that occur towards the end of The Tourist that I quite frankly didn't see coming AT ALL. And while some would argue that they're too contrived, honestly it all worked for me. The whole feel of The Tourist is pure escapism from beginning to end, coated with a glamour that evokes Old Hollywood - and people I just love that.
On to some of the other cast members - Paul Bettany plays Inspector John Acheson, a man who is completely obsessed with Elise's connection to Alexander, and driven to bring the fugitive to justice at all costs. Bettany adds class to any film he appears in, and I really enjoyed watching his obsessive inspector become increasingly more driven and borderline unhinged as the chase reaches its climax. Acheson's boss was played by Timothy Dalton of all people - loved seeing him on-screen, especially after his memorable guest spots on Chuck this past fall. But the best surprise of all was the moment Rufus Sewell appeared on the screen as "The Englishman." People, I just adore that man, and he needs to be in more movies or TV shows asap. I'm keeping my fingers crossed that the Zen mystery series he's been filming appears on the 2011 Masterpiece Mystery schedule.
The settings throughout the film are absolutely breath-taking. Filmed in Paris and Venice, the filmmakers take full advantage of the atmosphere and architecture to completely sweep one into the story. If you're like me you'll forgive any plot contrivances for another view of the gorgeous Venice cityscape. And because I'm such a film score junkie, I have to give a nod to James Newton Howard's lovely score. It was always the perfect complement to the scene or action, and with the occasional "caper theme" flourish that reminded me just a bit of old school James Bond, it was a lot of fun to listen to.
Okay, I can't resist discussing the twists I referred to earlier, so from this point on...
BEWARE OF SPOILERS :)
So, Elise turns out to be an undercover agent who "went dark" when she was sent to Russia to infiltrate Alexander's life. The problem? She fell in love with him. When she marks Frank and starts to get to know him, she decides that it's time to turn Alexander in - she still loves him, but she's started falling for Frank and doesn't want to see the hapless math teacher get hurt. Well, it turns out that instead of conning the police, Elise was the one getting played, because Frank was Alexander all along (still following me? *g*).
I found myself unexpectedly fascinated by the way the movie played with the idea of love - would it be possible for a woman to be so in love with, so tied to a man that she could fall in love with him twice and not realize it? Am I making sense here - are we supposed to believe, I guess, that Elise is drawn to Frank because subconsciously she "knows" him even though he has a new face? One can debate whether or not Jolie and Depp have sufficient on-screen chemistry - it's rather a slow burn between the two characters, and in the context of this story it worked for me. I guess it's the hopeless romantic in me that really appreciated how the final twist played out. Elise's delight at realizing she'd fallen for the same man twice, Frank/Alexander facing down the mobster, and the fact that Bettany's Inspector was right all along, and knew his quarry better than anyone ever gave him credit for - but he still couldn't capture the elusive Alexander in the act.
Escapism at its best, I found The Tourist to be a highly entertaining two hour diversion. The story's twists and turns and its gorgeous settings will be a world I'll enjoy revisiting in the future. And it's really quite a clean film, some action violence but other than that a welcome modern-day throwback to the great escapist "caper" films of the 1950s and 1960s. Here's hoping The Tourist inspires some people to check out the great films that so clearly inspired it. Click to read my review of North by Northwest, if you're interested. :)
Posted by Unknown at 10:33 PM

Great review! I agree with you--there's nothing more romantic than trains in movies! I think films like North by Northwest and The Lady Vanishes were big contributors to my enduring love of train travel :)

@Roving Reader - Thanks! I forgot about The Lady Vanishes, that movie is so much fun too! I need to take a train trip. :)

Just saw this and I remembered you wrote a review so I had to read it again...WHAT A TWIST. Wheww! TOTALLY didn't see it coming. Totally. I just sat there and screamed "WHAT?!" at my screen for two solid minutes after the credits rolled. I mean, I knew almost from the beginning that she was with the "good guys", but I honestly NEVER got that he was Alexander. That was just...mindblowing.

REALLY fun movie. Enjoyed it a lot more than I thought I would. Still trying to work out the twist and how his character totally isn't what I thought he was...probably be up all night doing that. ;) Anyway! Really enjoyed it.

@Alexandra - Oh yay! I'm so glad you enjoyed this one -- I loved that I was actually SURPRISED like that in the theater. I think it is such a fun film.