I have a ridiculously huge collection of Christmas music. This year, two new releases added to the mix have been getting a lot of play - here is the first of those reviews. 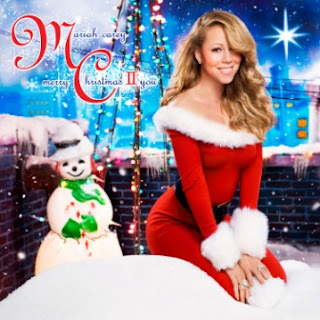 When it comes to Christmas music, I tend to gravitate towards the traditional or jazzier sounds of the season. But there is a big part of me that absolutely adores pop music, and Mariah Carey’s Christmas music ranks high on that list. Her first Christmas album, Merry Christmas, became an instant classic and has received annual play from me since I became a fan of her music in the ‘90s. Aside from the occasional single, I’m not a huge fan of the predominantly R&B sound she’s favored for the last few albums. But Merry Christmas II You is the perfect “bridge” project, a great companion album to her first Christmas release. It’s full of classic Christmas carols given the Mariah Carey treatment and newly-penned songs sure to become favorites that will rank with “All I Want for Christmas Is You” and “Jesus Born On This Day” as modern holiday classics. The album opens with a 23-second pure musical “Santa Claus Is Coming to Town” intro that perfectly segues into Mariah’s latest single “Oh Santa!,” clearly an attempt to capture lightning in a bottle twice and repeat the success of “All I Want.” And I have to say, for me it works – it’s addictive, catchy, and fun – pure pop magic like only Mariah can produce. This upbeat opener is followed by a succession of beautifully produced, laid-back carols and ballads, perfect for relaxing with a cup of cocoa in front of the fire. “Christmas Time Is In the Air Again” has a wonderful jazz feel to the arrangement, and medleys like “O Little Town of Bethlehem/Little Drummer Boy” prove Mariah is as adept at wrapping her multi-octave vocal range around carols as she is slinky romantic ballads. One of the stand-out traditional tracks is “O Come All Ye Faithful/Hallelujah Chorus” featuring Mariah’s mother Patricia Carey, an opera vocalist who was a huge influence on her daughter’s vocal stylings. I absolutely loved hearing them sing together, the arrangement and vocals all work together to make their collaboration the crown jewel of the album. My personal favorite is the new song “One Child,” a gorgeous retelling of the Nativity story with the reverential feel of a hymn and a wonderful showcase for Carey’s vocals. Other favorites include a funky, upbeat version of “Here Comes Santa Claus” and perhaps most surprising of all, a fantastic reimagining of “Charlie Brown Christmas.” It wouldn’t be Christmas for Carey’s fans without “All I Want For Christmas Is You,” and Mariah delivers again with an “extra festive” mix of her classic pop gem. Finally, the album closes most appropriately with “Auld Lang Syne,” that starts off traditionally and then transitions into a fantastic dance mix, closing the album on a festive high note. Filled with gorgeous arrangements, catchy pop numbers, and Mariah’s signature vocal acrobatics, Merry Christmas II You is pure pop magic, sure to be enjoyed by Carey’s fans for years to come.

Here's a video of Mariah singing "One Child" from the TV special Christmas in Washington:

I want this. What I've heard is so cute.