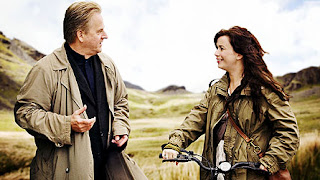 Sunday night Masterpiece ended an extraordinary 2010 run with Framed, a charming, heart-warming little comedy that was an unexpected delight. Based on the novel of the same name by Frank Cottrell Boyce (which I am really going to have to read now), Framed was inspired by real-life events from World War II. During the war, Churchill vowed to protect England’s art treasures from potential Nazi looters. During the blitz, the National Gallery was emptied and the paintings were stored in an abandoned slate mine in remote North Wales. One painting per month was sent back to London, and thousands would line up to view it. Framed asks the question what would happen if the National Gallery had to be evacuated again? Here’s the story summary from the PBS website:

When flooding in London's National Gallery precipitates the transfer of its treasured paintings to safety in an abandoned slate mine in the Welsh countryside, curator Quentin Lester (Trevor Eve, David Copperfield), a worshipper of art to the exclusion of people, squires his beloved masterpieces to safety, secretly pleased to have them all to himself. There, he encounters a lineup of quirky inhabitants including the spirited and lovely, if slightly nosey, local schoolteacher, Angharad (Eve Myles, Little Dorrit), and a 10-year-old boy, Dylan Hughes. In a chain of misunderstandings triggered by a wayward chicken, Quentin mistakes Dylan, whose father has just left the family in the face of financial woes, for an art connoisseur and kindred spirit. But when Dylan, in desperation, plans the art heist of the century with his criminal-mastermind-in-training sister Minnie, the results reveal how these paintings on the move have tremendous power to move people. Framed is based on the bestselling book by Frank Cottrell Boyce.

First of all, I just have to say I loved the fact that Framed contains a love story between two mature, older adults. You just don’t get enough of that in films, at least in my experience. I’m not super-familiar with Trevor Eve’s work, especially since it’s been ages since I’ve watched the Masterpiece production of David Copperfield that he appeared in (playing the character of Murdstone). Here Trevor Eve is wholly believable as the shy, retiring type, completely consumed by his work, and has his passions awakened only when he thinks he’s found a kindred spirit or he encounters someone who doesn’t revere art as he thinks they should. Eve’s character, Quentin, is thrown completely out of his element when he follows his beloved paintings to the isolated town of Manod in North Wales. He thinks he’ll get to tend the masterpieces in glorious solitude, but the interest and reaction of the locals throws an unexpected wrench in his plans. Quentin’s awakening throughout the movie, the way the townspeople draw him out of his shell (and vice-versa), is completely believable and a delight to watch unfold. Before he realizes it, Quentin is learning to care about people and their unique and varied responses to the art in his care more than the paintings themselves.


Torchwood’s Eve Myles plays Angharad, the local schoolteacher, one of the townspeople largely responsible of piquing Quentin’s interest in the “outside” world. She’s spirited, a bit nosey, and not at all afraid to push back and challenge Quentin’s – how shall I phrase this – social awkwardness. *wink* I really like Myles’s work – not only is she a fantastic actress, but it’s so refreshing to see a leading lady who is not your typical “cookie cutter” Hollywood beauty. Since Myles’s is probably best-known for her role as alien-fighter extraordinaire Gwen Cooper in the Doctor Who spin-off Torchwood, it was a real treat to see her play a character who is equally spirited but quite a bit “dialed-down” from her most famous role to date. I really adored the way the film develops the love story between Quentin and Angharad. At first blush, you could argue that the two characters couldn’t be more polar opposites of each other – but there is an element of loneliness and solitude to each of their lives that I think plays a role in drawing each to the other. And I just have to say two scenes absolutely made me melt – the first, when Quentin recreates the dinner painted in one of his priceless masterpieces for their first “date,” and the second when he draws Angharad’s silhouette on the wall and makes the comment that art began as someone wanting to tell another person “not to go,” to capture a moment in time forever. Loved it.
But Framed is much more than a love story. The town of Monad is populated with a wonderful assortment of quirky characters that play a role in bringing Quentin out of his shell, and each has a varied and powerful reaction to the power of art. Perhaps my favorite example of this is the character of Mr. Davis, the eccentric, Elvis-loving local butcher, played by Robert Pugh. Pugh should be a familiar face to fans of British film, having appeared in everything from the most recent series of Doctor Who to Ridley Scott’s Robin Hood. Quentin is reluctant to tolerate Davis’s eccentricities, until Angharad reminds him that the “heart knows the reasons why,” and he learns the tragic story of Davis lost his young son to a drowning accident, leading to a complete mental breakdown. Davis’s heart-rending response to one of Monet’s paintings (if I’m remembering this incorrectly, someone please correct me!) is brilliantly played by Pugh, and is a powerful example of the ability of art to transform one’s perspective and, if one allows it, to be a catalyst for emotional healing.
The kids who live in Monad are another highlight of this production. The Hughes family runs Monad’s only petrol station, and most days are lucky to put food on the table. When the father leaves, thinking his family would be better off without him, the children kick into high gear with creative plans to earn money and save their home. The two masterminds are Dylan, played by Sam Davies, and Minnie, played by Mari Ann Bull. Based on their appearances here, I’d venture to say that Davies and Bull both have bright acting futures ahead of them! Dylan’s interaction with Quentin is absolutely hysterical. When the two first meet over a runaway chicken, Dylan thinks their having a conversation about Teenage Mutant Ninja Turtles, while Quentin thinks Dylan is some sort brilliant art connoisseur who appreciates Italian masters like Raphael. This extended misunderstanding had me laughing so hard at one point tears were threatening to come! When the family situation becomes desperate, Dylan and his criminal mastermind in the making sister, Minnie, hatch a brilliant plan to steal one of the National Gallery’s paintings. Their plot goes off shockingly without a hitch, and the hijinks and confusion that ensues are a lot of fun to watch play out.
Framed turned out to be an absolute treasure of a film, and I’m so happy it was included on the Masterpiece Contemporary schedule. It was the perfect ending to my Christmas weekend, managing to hit all the right notes story and character-wise. The love story between Quentin and Angharad is a gem, and the final scene may just bring a tear to your eye it is so wonderfully, beautifully perfect. I also defy you not to look at art a little differently, perhaps a little more personally, after viewing Framed. Art’s ability to transform the individual and then, on a wider scale, a community, is really well portrayed in my opinion. It’s this aspect of the storyline that elevates Framed above the status of a “cutesy” little comedy. One minute the film will have you laughing out loud, the next moment you could be wiping a tear from your eye as a character stops cold and learns to experience life in a different way or on a more intense, personal level.
I hope this post encourages you to make time to watch Framed if you missed the broadcast on Sunday. You can watch the entire film for a limited time on the PBS Masterpiece website, and the DVD will release January 11th.
Posted by Unknown at 8:50 AM

Not going to read your post yet because I just started watching this over breakfast this morning. About 20 min in and liking it. I love stories set in the Welsh countryside.

@Lori - YAY! Hope you come back & chime in with your thoughts! The countryside in Framed is just gorgeous, isn't it?

I really liked it, too. It gave me the warm fuzzies. I loved how the great art transformed the way the people in the community saw their world. I totally want to move to Monad now! ;)

@heidenkind - Oh yay, I was hoping you enjoyed it too! And yeah, at the very least I am ready to visit Monad... :)

Yep, enjoyed it very much. The little red haired girl was adorable. :) This is the the kind of warm, fuzzy, with just enough depth sort of film I like to see now and then.

@Lori - I just knew you'd love Framed! Thanks for checking back in with your views! And I agree, the little redhead was adorable and hilarious!!