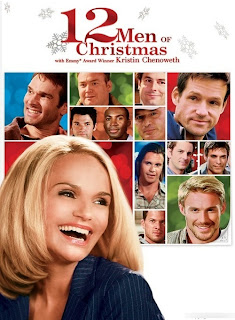 When watching the movie 12 Men of Christmas for the third time this holiday season (side note: I realize that sounds like I’m in some sort of pathetic made-for-TV-movie-watching-rut, but hear me out), I realized it was absolutely imperative that I blog about this little gem. Because dear blog readers, 12 Men completely rips off something that you all know is near and dear to my heart – Jane Austen’s Pride and Prejudice. Yes, you read that correctly – a movie about a woman who’s trying to put together a beefcake calendar evokes images of Elizabeth and my dear Darcy. The mind boggles trying to comprehend Jane’s response to such an association, though she was quite a forward-thinking authoress, so I like to imagine she’d see the humor in the connection.
12 Men stars Kristin Chenoweth as E.J. Baxter (gosh, those initials E.B. seem awfully familiar…), a New York PR executive who finds herself in need of a job after finding her “perfect” fiancé canoodling with her boss at the office Christmas party. Chenoweth is one of my favorite actresses, a true triple threat – she acts, dances, and sings (and boy does this girl have a set of pipes!). Chenoweth has dynamite-levels of sass and spunk packed into her 4’11” frame, a quality that serves her well in playing a character loosely (very loosely, mind you) reminiscent of the one and only Elizabeth Bennet. E.J.’s story begins innocuously enough, seemingly a simple variation on the old “fish out of water” theme as our Gucci-loving New Yorker finds herself black-balled by her ex-boss and exiled – ahem, I mean moved – to Montana, a.k.a. “the hole in the ground,” to work her PR magic for the tiny town of Kalispell.
The sparks really start to fly when she meets Will Albrecht (echoes of FitzWILLiam, anyone?), a drop-dead gorgeous and insufferably proud member of the local volunteer search-and-rescue squad, which just happens to be desperately in need of a new helicopter and sorely lacking in the fund-raising ideas department. Will is played by Josh Hopkins, who is de-lish!! Even before E.J. broaches the idea of a pinup calendar fundraiser (just in case any really conservative film watchers are reading this, everyone is wearing pants during the photo shoot, so calling this thing a naked calendar is, well, a bit funny), when she and Will meet they immediately butt heads over outlooks on life, priorities, you name it and the only thing they probably would agree on is to passionately disagree.
Lest you think I’m stretching the Pride and Prejudice connections, let me fill you in on the other Austenesque characters that people this little movie. When E.J. moves to Kalispell, she appropriates the services of the irrepressible Jan as her assistant, played by Anna Chlumsky. I still can’t look at her without thinking of the movie My Girl, she’s frozen in time as far as I’m concerned! Jan (c’mon, admit it, how many of you want to read Jan as “Jane”?) is, of course, super-sweet, and suffering from a crush on the adorable but socially awkward Eric (Jefferson Brown). Eric just happens to be (wait for it!) Will’s BEST FRIEND!! As you may suspect, hilarity and misunderstandings ensue when Will warns Eric away from Jan because of her friendship with E.J. Will is also highly aggravated when E.J. starts dating his womanizing nemesis Jason (Stephen Huszar), a Wickham-like doppelganger (with AWFUL hair!), who fills E.J.’s head with stories about Will to cement her poor opinion of him.
My favorite Pride and Prejudice rip-off scene - or maybe I should say loving homage? *wink* - mirrors Darcy's first, very reluctant, proposal to Elizabeth. The way Will freaks out on E.J., going on and on about how much he can't stand her or understand his feelings (the word "revolting" is used more than once) is one of the movie's funniest scenes in my opinion. And though at 6'2" Hopkins has a good 15 inches on Chenoweth, the way her fury builds at Will's insulting declaration is hilarious to behold. I have no doubt that were the scene real, E.J. could have taken Will in a fight. *wink* Also, the resolution of the whole Jason mess and Will's true history (i.e., the real reason he's been such a grouch, poor baby!) turns out to be a nice modern-day twist on the Wickham/Darcy relationship.
Sure, 12 Men of Christmas is predictable, but that's how I like my made-for-TV Christmas movies - they're virtual comfort food, after all. :) And I when I find one that quotes from Pride and Prejudice, one of the all time greats, and one of my all time favs? Well that my friends is a modern holiday classic.
Dear Santa,
I wouldn't complain if all I got for Christmas was Josh Hopkins. Just sayin'.
Thanks,
Ruth 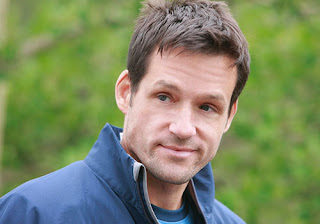 @Juju - Thanks! Check your TV listings - this may show up on Lifetime sometime this week! Or since it's on DVD you could Netflix it.

@heidenkind - No kidding! And really one can't beat N&S for being P&P but not exactly, can one? LOL :)

Great review, Ruth! This sounds like a movie I would enjoy... ;)

Good! Now I've read it and it does seem we share much. This movie is exactly the kind of relaxing, predictable, amusing, romantic stuff I like to watch for Christmas. And with echoes of Austen in it, it becomes perfect. If someone doesn't agree with us, never mind. Glad to find you liked it too, Ruth. MG

Did you know this movie is based on a book? http://mjmbecky.blogspot.com/2010/12/review-dating-mr-december-by-phillipa.html

@heidenkind - Yep, I'd heard this movie was based on a book but I haven't read it (yet...famous last words...haha!). Thanks for the review link!