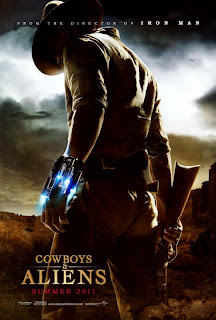 Okay, I freely admit that any film called Cowboys & Aliens would generally be automatically dismissed by yours truly. But see, I have a thing for cowboys. And cowboys played by freaking DANIEL CRAIG?! I am SO THERE. (Did I mention that Harrison Ford is in this movie too?)

I was going through my emails and found where I'd emailed myself the trailer to this film a couple of weeks ago, with the intent of sharing it on the blog. So better late than never, right? Here you go:

Here's a story summary from the film's IMDB page, from the studio:


The Old West.. where a lone cowboy leads an uprising against a terror from beyond our world. 1873. Arizona Territory. A stranger with no memory of his past stumbles into the hard desert town of Absolution. The only hint to his history is a mysterious shackle that encircles one wrist. What he discovers is that the people of Absolution don't welcome strangers, and nobody makes a move on its streets unless ordered to do so by the iron-fisted Colonel Dolarhyde (Ford). It's a town that lives in fear. But Absolution is about to experience fear it can scarcely comprehend as the desolate city is attacked by marauders from the sky. Screaming down with breathtaking velocity and blinding lights to abduct the helpless one by one, these monsters challenge everything the residents have ever known. Now, the stranger they rejected is their only hope for salvation. As this gunslinger slowly starts to remember who he is and where he's been...

And just because these pictures are so fabulous, they deserve to be shared too... :) 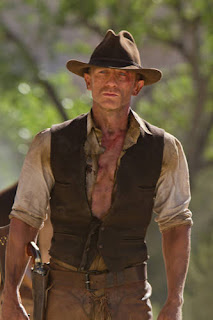 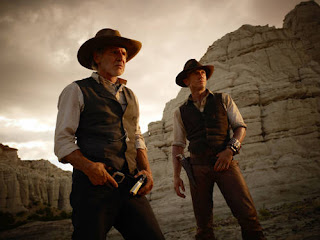 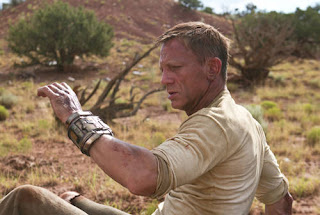 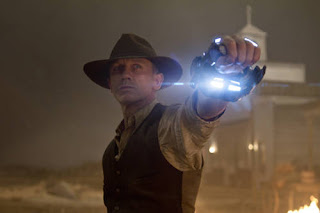 Oooo I can not wait for this :)

It's James Bond vs. Han Solo/Indiana Jones. This movie is a movie version of all those mashups...so crazy that it might work.

I am SO THERE, too! Daniel Craig as a cowboy is just as awesome as it gets. So excited about this movie!

I'm not sure I would go to a theater to see this, but I will definitely watch it eventually. :)

@Deborah - HAHAHA, you are so right!

@Polka Dot - I don't know why the genius idea of Daniel Craig as a cowboy has never been tapped into before...

@heidenkind - Oh, this is definitely worth the big screen treatment IMO! :P

Can I just say that poster alone makes me want to see it?

Cowboys and aliens - almost a good a concept as SPACE COWBOYS! :D Since playing Deadlands the roleplaying game, anything involving cowboys sounds a lot more interesting. So this sounds great! Thanks for letting us know! :D

@Traxy - Cowboys...oh gosh don't they make everything better? :) You're welcome for the heads up!