The fall/Christmas movie season is practically upon us, and there are several films I'm interested in seeing in the coming weeks. I've featured a couple of these on the blog before, but for those that have made appearances here, I think they are worth featuring again because the trailers are so good. :)

I've always had a thing for horse stories, so I'm definitely going to see Secretariat:

The last Katherine Heigl movie I really enjoyed was 27 Dresses, and this movie looks like it might have teh same kind of heart. Plus, it has the added bonus of Josh Duhamel's presence, and I adored him in When In Rome! Here's the Life as We Know It trailer, also opening on 10/8:

This movie just looks fun, plus since I'm a crazy Chuck fan it has the added bonus of featuring Zachary Levi voicing the lead! Here's the latest Tangled trailer:

The history and the acting talent in this picture makes it an absolute must-see in my book. I forgot to mention in my previous post about this film that it's also notable for being a mini Pride and Prejudice reunion - Colin Firth, a.k.a. Mr. Darcy plays King George VI while Jennifer Ehle, a.k.a. Elizabeth Bennet, plays Myrtle Logue. Here's The King’s Speech trailer:

Words cannot express how happy I am that the release of a third Narnia picture is right around the corner. Here's the latest trailer I could fine for The Chronicles of Narnia: The Voyage of the Dawn Treader:

And last but certainly not least, an exciting new version of Shakespeare's The Tempest is slated to open on 12/10 as well (my guess is limited release). This play is near and dear to my heart, one of my favorites since it was the subject of my senior English thesis paper in high school. I adore Helen Mirren's acting, so I'm anxious to see how this "revisionist" take on the play "plays" out on-screen (no pun intended). I can't find that a trailer has been released yet, so I'll leave you with this awesome poster image: 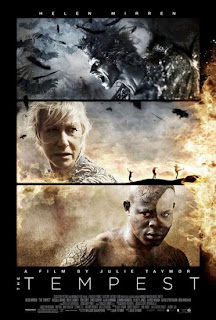 Isn't it cool? :) How about you, what films are you looking forward to seeing heading into fall?
Posted by Unknown at 2:53 PM

Harry Potter is just about all I can think of right now. So excited!!!

Oooh, so that's when the next Narnia film is out! Thanks! Been wondering about that. :)

We rarely go to the cinema these days for some reason, which is a shame. We seem to end up renting them as they come out on DVD instead, but still, some movies we just HAVE to see at the cinema. HP is one of them and I think Narnia might be another!

@Juju - I dearly hope that Tangled is a fun as the trailers promise!

@heidenkind - I know, thinking about HP can be kind of overwhelming. :)

I also can't wait for "Deathly Hallows: Part 1" and "The Voyage of the Dawn Treader." I'm even excited for "Tangled." I've always loved the story of Rapunzel. I just wish they had left the title alone and backed off a little with the girl power thing. :) But I'm still sure it'll be really good. Usually there aren't any movies that I'm interested in coming to theaters...and now there are quite a few!

I would love to see "The King's Speech," if it wasn't rated R. And even though he isn't my favorite Mr. Darcy, it seems wrong that Colin Firth's handsomeness seems to increase with his age. :)

@Kristin - I'm really happy the story of Rapunzel is getting some Disney love at long last - it's such a great story, but it seems to get the short shrift as far as retellings go.

I am a little surprised that The King's Speech is rated R...I'm curious to find out why closer to the movie's release when the reviews start rolling in in earnest. And you've made a great observation about Colin Firth...the older he gets the more distinguished he's become. Love it. :)