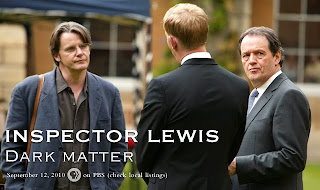 Oxford professor and amateur stargazer Andrew Crompton emerges from a church confessional, cryptically exclaiming that on Friday at 3:15, he'll have an "excess of joy." Later, Crompton is found dead at the foot of the stairs in the Oxford observatory. The investigation draws Detective Inspector Lewis (Kevin Whately) and Detective Sergeant Hathaway (Laurence Fox) into the ethereal writings of a 17th-century astronomer and a modern-day circle of scientists and musicians, and their unexpected connections to the deceased. The cosmos aside, there's a dark deception at the center of the case, one that Lewis and Hathaway won't be able to fully comprehend until Friday at 3:15.

I thought this episode was wildly entertaining, and like the best Lewis episodes I didn’t see the resolution coming. The script, pacing, and casting for this episode was all absolutely top-notch, and the filmmakers packed the storyline with enough red herrings and interwoven relationships that I suspect it will take several more viewings of this episode for me to fully appreciate the precise way in which the story unfolded on-screen.
After last week’s episode, The Dead of Winter (my review), which was wonderfully well done but decidedly dark in tone, Dark Matter was noticeably lighter in tone in spite of its shared murderous subject matter. Let me mention the principle players first – Lewis (Kevin Whately), Hathaway (Laurence Fox), and Dr. Laura Hobson (Clare Holman). This episode was a welcome change of pace in that it gave us some insight into Laura’s life outside of her work as a coroner – she’s a clarinet player in a local orchestra. When Lewis and Hathaway badger her into doing some undercover investigative work, and then she delivered, I nearly cheered – it was so much fun to see how impressed they were with her game and sleuthing skills. And once again I realize this is probably the romantic in me, but I did so hope that Lewis was perhaps sitting up and taking notice of the fact that Laura looked positively gorgeous in her performance dress. But seeing as its Lewis we’re talking about I’m guessing not. *wink* I also LOVED the interaction between Lewis & Hathaway in this episode, especially the very funny moment when they joked about their lack of a social life when they can’t come up with exciting dates for the musical gala (Lewis is taking his boss, and Hathaway had “no takers” – shocking!).

This episode was also chock-full of familiar acting talent. Arnold Raeburn, composer and conductor, is played by Robert Hardy. Hardy is a very familiar face to Harry Potter fans – he plays Cornelius Fudge, head of the Ministry of Magic. Most recently he’s also appeared in Bleak House as Tite Barnacle. Another Bleak House alum makes an appearance in the form of Warren Clarke* who played the character of Boythorn. Here Clarke plays the head porter, an opportunistic, rather sniveling character who quite honestly made my skin crawl. He gets the shock of his life by the end of this story, and I have to say he was just full of himself enough to make me think he deserved it just a bit.

Raeburn’s protégé, Malcolm Finniston, was played by Anthony Calf*. Calf portrayed Colonel Fitzwilliam in “the Colin Firth” Pride and Prejudice from 1995. I don’t think I’ve seen the man in anything since then! Finniston had some unexpected secrets of his own that are revealed by the end of the program – just another one of the script’s fascinating twists and turns that were much appreciated. And finally, Andrew Hawley played the devoutly religious student Jez Haydock. It was interesting to see how the script examined Jez’s character and his struggles to reconcile his faith and his studies, and the contradictions and problems that ensue as a result. Hawley’s career is really just getting started – he first appeared on my radar when he played Hareton in the 2009 Masterpiece Classic version of Wuthering Heights. (Speaking of Wuthering Heights, I think I need to transfer my review of the 2009 production to this blog...)

The "reveal" at the end of this episode left me absolutely gobsmacked...I did not see it coming. If "dark matter" means something muddled and confused and hard to comprehend, well that is an apt description of the twists and turns Lewis and Hathaway discover amongst this particular group of Oxford residents. That's not to say the story doesn't make sense - when this show is "firing on all cylinders" so to speak and all of the pieces finally fall into place, it's quite a rewarding viewing experience. I can't wait for next week's episode!

*I want to thank Laurel Ann at Austenprose for pointing out the Clark and Calf acting credits in her excellent review of this episode, which you can read here.
Posted by Unknown at 3:01 PM

FINALLY got around to seeing this episode. I had trouble paying attention to it, but you're right, I absolutely did not expect the murderer to be who it was. I was hoping it would be that little b---h Kate. :P

My favorite part of the episode was the interaction between Lewis and Hathaway. Like when Hathaway got foam on his nose and Lewis was like, "You're good." Haha. ;)

@heidenkind - Me too, I totally thought it was gonna be Kate. But for as surprised as I was by the big reveal, it didn't seem like a cop-out...that's one of the things I love about this show, when they throw curveballs you can buy it.

And yes, the interaction between Lewis and Hathaway was FANTASTIC! Love them. :)

Was it just me, or did the Jez Haydock actor look a lot like Tom Riley?

@Joni - You are so right! Have you seen the 2009 version of Wuthering Heights? I'd say the resemblance is even more pronounced there.

You mean the one with Tom Hardy? Sadly I haven't seen that one yet, but it's on my list.

Speaking of people who were in Band of Brothers, someone else who reminds me of Tom Riley is Andrew Scott - in fact when TR first appeared on screen in Lost in Austen I ran up to check IMDb and see if it was AS.

@Joni - Yep, the Tom Hardy version is the Wuthering Heights adaptation I was referring to! Hope you get to see it soon!