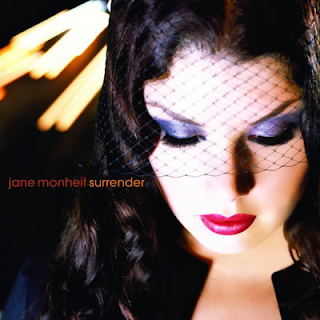 One of my all-time favorite vocalists, Jane Monheit, recently release a brand new album - Home. Her new CD inspired me to revisit my review archives and re-post any Monheit album reviews I've done in the past to this blog. I originally reviewed Surrender back in May 2007.

Surrender, Jane Monheit's seventh release and her first with Concord Records finds the velvet-voiced chanteuse in top vocal form, interpreting a selection of pop songs and standards woven together with dreamy bossa nova rhythms. I was a little concerned about what direction Monheit's recording career would take after she departed Sony, where she released Taking a Chance on Love and The Season. The former is an absolutely sublime collection of standards from MGM musicals, while the latter, a Christmas disc, contains moments of brilliance but stylistically is somewhat disjointed and quite frankly a bit of a mess style-wise. She's a great singer who seems to struggle with finding her musical "niche." With Surrender, Monheit moves away from the straight pop-jazz style of Taking a Chance on Love, and returns to the Brazilian-influenced, bossa nova style pop that was often evident on her first three albums for the N-Coded label. It's a shrewd move and a successful one given the resulting album. Surrender is so utterly lovely, lush and romantic and seamlessly constructed, it reminds me of the classic Brazilian-style concept album Frank Sinatra recorded with the inimitable Antonio Carlos Jobim forty years ago. Given that it is fitting that on Surrender Monheit puts her own spin on two of Jobim's compositions -- "So Tinha De Ser Come Voce" and "Caminhos Cruzados" (the latter featuring Toots Thielemans accompanying her on the harmonica). She turns in an absolutely stunning version of "Moon River" -- Monheit at once makes the song both a tribute to the original version and entirely her own with her pitch-perfect, wistful interpretation. There is a gorgeous duet with Ivan Lins on his composition "Rio De Maio." Monheit's also accompanied by composer Sergio Mendes on "So Many Stars," one of my favorite tracks. Other standouts include the beautiful, lyrical "If You Went Away," "Surrender," which shows off Monheit's vocal range, her re-invention of Stevie Wonder's "Overjoyed," and the elegant simplicity of Johnny Mandel's "A Time for Love." Target is selling Surrender with a bonus track, "The Shining Sea."
Posted by Unknown at 9:46 AM

I've never heard of her. I need to check her out. Thanks for the recommendation :)

@Juju - Oh, she is just wonderful! My favorite albums of hers are Taking a Chance On Love and her latest, Home.