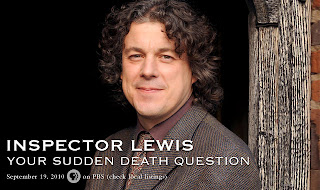 I can’t believe I haven’t been able to blog about the fourth episode of Inspector Lewis yet! Your Sudden Death Question aired this past Sunday on Masterpiece Mystery, and as is the norm for this stellar series it delivered another engrossing story with enough twists and turns to keep your head spinning. Here’s the story summary from the PBS website:

It's a quiet holiday weekend and the Oxford campus has emptied out. But the competition is still fierce — and deadly — thanks to a group of quiz enthusiasts who have convened to compete for a cash prize and bragging rights. Foul play is afoot when one contestant, a charming but lecherous primary school teacher, is found dead in a fountain. The campus is locked down, and Detective Inspector Lewis (Kevin Whately) and Detective Sergeant Hathaway (Laurence Fox) start interviewing the other contestants — among them Oxford academics, young mothers, students, soldiers and lawyers. Is this a crime of passion or out-of-control competition? Lewis and Hathaway match wits with the contestants and race for answers as the game takes one final, grim turn.

First of all, I cannot tell you how much I enjoyed getting a brief glimpse into Lewis and Hathaway’s off-duty lives (especially Hathaway’s, I cannot lie). Just when I think this series can’t possible reveal more about Hathaway’s character for me to love, we discover that he plays guitar and looks really, really good in jeans. *g* Unexpected but absolutely perfect, these touches add great dimension to his character. And speaking of surprises, seeing Lewis in a tux, getting ready to go to the opera – well that was a shocker, no? He’s been closed off emotionally for so much of the series due to the untimely death of his wife that it was really sweet to see him getting ready for a “friends” date with Dr. Laura Hobson (Clare Holman).

However, I’ve got kind of mixed feelings about how Lewis and Laura’s relationship played out over this episode. I’ve been looking forward to the day when the filmmakers would move these two characters in the relationship direction, but ultimately things felt a bit rushed for me. There were brief, fleeting hints during earlier episodes of this season that gave me hope that Lewis was warming up to the idea of dating Laura. But finding out they’d planned a weekend getaway to see the opera (with separate hotel rooms, though, as Laura is quick to point out later) seemed like a giant leap forward for the pair. I guess it struck me as a bit out of character since I’m used to things moving forward rather slowly for my beloved main characters in the Inspector Lewis universe.  But maybe that’s just me…thoughts?
As far as the actual murder mystery goes, I really enjoyed the quiz weekend set up. Since Oxford emptied out so people could enjoy the long weekend, the pool of suspects was very limited and controllable. The set up reminded me just a bit of Agatha Christie’s Ten Little Indians, especially since the police could order the porter to keep everyone locked on the grounds pending investigation results. As far as the cast goes, to my recollection this episode contained fewer than the usual normal “quota” of familiar faces that populate the British acting world. However, there are a few cast members that I definitely want to call out.
First and foremost, I have to mention Nicholas Ferrell as Charles Milner, one half of the “Grey Guardians” quiz team. I really don’t want to spoil anything if you’ve yet to see this episode, but I thought Milner’s character was fascinating – just when you think the filmmakers are going to go right with the character, they veer to the left and surprise you with revelations about his past, work, and possible motivations. Very well done. The other half of the Grey Guardians, Donald Terry, was played by actor Timothy West. West should be a very familiar face to fans of BBC costume dramas since he played Sir Leicester Dedlock in the wonderful Bleak House. The first victim, Ethan Croft, is played by Adam James – observant Foyle’s War fans may recognize him from the episode Killing Time. Ethan’s character is another great example of just how well written this series is – when he’s introduced you think he’s just a lech, and ultimately he is, but by the end of the story some unexpectedly admirable traits are revealed. Ethan’s forgotten ex-girlfriend member of another quiz team is Robyn Strong, played by Ruth Gemmell. Gemmell appeared in series 3 of Primeval, episodes three and four as a reporter. (I really, really need to go back and rewatch Primeval from the beginning, since – WOO-HOO – the show is slated to FINALLY return to TV sometime in 2011!!) Those are the faces that really jumped out at me during my initial viewing of this episode. There are a few other familiar faces who have made random appearances on British shows (such as Poirot or Miss Marple), but in relatively small roles if memory serves. 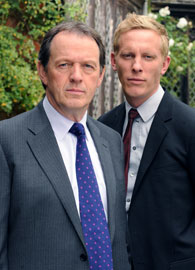 The absolute runaway highlight of this episode for me was once again the development of the friendship between Lewis and Hathaway. Now that Lewis is finally pursuing a relationship with Laura, Hathaway has a field day teasing him about it - those scenes were hilarious! When Hathaway’s precious Gibson guitar is stolen during his abbreviated holiday weekend at a world music festival, he’s crushed. Lewis takes an unexpected but wonderful to see interest in helping his despondent partner track down his stolen property. It was really fun to see how Lewis has been influenced by working with Hathaway for several years now during this little side investigation, or the “Gibson angle” as they dub it when asked by the Chief Superintendent. In his off the books investigation of Hathaway’s theft, he takes on his younger, more media-savvy partner’s role, and it was hilarious to see Hathaway’s reaction to the role reversal. And the moment at the very end of the episode, where Hathaway stands outside the police station hugging his guitar case, a look of pure bliss on his face, was absolutely priceless. This team just keeps getting better & better!
I love this show, and despite my hesitation over the way Lewis and Laura seem to be rushing into a relationship rather quickly, I'm anxious to see where these characters are headed. The joy is in the journey, as they say, and Lewis and Hathaway are characters that are always worth spending time with - especially since they solve some of the most surprising, well-crafted mysteries one could wish for.

Note: Since I'm so late in blogging about this episode, I nearly forgot the most exciting bit of casting - Laurence Fox's brother Jack in the role of student and quiz competitor Alfie. According to his IMDB page, this is only Jack's second acting credit, but he's such a dish and with the acting blood he's got in his genes I'm sure we'll be seeing more of him on-screen (at least I hope so!). Here's the only pic I could find online - the Fox family shortly after the birth of Laurence & Billie Piper's first child.

whoa, how did i miss that Hathaway was married to Billie Piper? you learn something new every day

@Deborah - I remember being kind of surprised when I first heard they hooked up...but they've been married 2 or 3 years now (I think) and I just learned they had a kid like a year ago!

ANYway, I totally agree with you about the Lewis & Dr. Hobson date--it was a let-down. And honestly, what guy worth his salt goes to an opera with a woman and then agrees to separate rooms? This seemed way out of character. If Lewis ever agreed to an opera, I would expect him to do it only kicking and screaming and whining about it the entire time.

I have to say, this wasn't my favorite episode of the season. It's hard to take the quiz thing seriously, I can't lie!

@heidenkind - I like Billie in Doctor Who, but that's about it.

And the more I think about it, the more I can't emphasize enough how much the way the show handled Lewis finally going on a date with Dr. Hobson. Really poorly done IMO. The best part of the show was any scene involving Hathaway. I liked the contained element of the quiz show weekend setup, but the principle of the quiz show...well if I think about that too long it does become a bit lame... ;)

Who dunnit in the Sudden Death episode?? We lost our cable 20 minutes from the end of the program. Did Hathaway get his Gibson back?

@kathy - The lawyer. And as I mentioned in my post, Lewis helps Hathaway recover his guitar. :) It was a great moment!

Weren't there two lawyers? The guy and gal? Which one and what was the motivation?
Thanks!

@kathy - The guy lawyer. You can read a full story synopsis here: http://www.pbs.org/wgbh/masterpiece/lewis/suddendeath_synopsis.html

Ruth - for once we are in disagreement about the new direction of Hathaway's over interest in his bosses romance. Ease dropping on his phone conversations and needling him for details of his date with Laura? This is outside of enough. I thought it totally out of character. Hey, don't turn Mr. Darcy into Mr. Bingley and not expect his fans to be miffed.

Otherwise, I think this series is more successful with plots that are darker. This was almost a parody of an Agatha Christie country house murder, which is fine, but they played it for humor instead of drama with a few humorous moments. Not my favorite episode, and I will always remember it as the one that they made Hathaway into a busy body. Ugh.

I appreciate your insights though. You always see something I do not and that is great.

@Laurel Ann - You make a great point. The comparison to turning Darcy into Bingley made me shudder a little, LOL! I hadn't gone there with the Hathaway scenes, now I may never get that idea out of my head, LOL! ;)

I think my view of the scenes may change upon multiple viewings. I have a shocking hole in my DVD collection - NO Inspector Lewis discs! And since last summer when series 2 aired, I changed cable providers and got rid of my DVR, so I'm writing my reviews based on first impression memories only. I thought the Hathaway scenes were cute, but my view may change once I add Lewis DVDs to my collection (and since Amazon is currently selling series 3 preorders for $19.99, I think I will have to take advantage of that!).

I definitely agree with you, though, that the shows strongest episodes are the ones with the darker storylines. I really appreciate the contrast between the serene Oxford setting and the dark doings that Lewis and Hathaway must figure out!