Review: Stars in the Night by Cara Putman 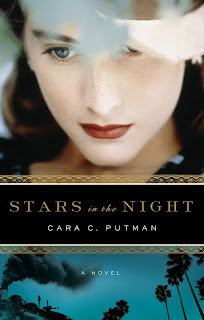 Any other day, attorney Audra Schaeffer might have been flattered by the friendly overtures of Robert Garfield – a real-life movie star. But on the flight from Indianapolis to Hollywood, Audra can think of little else than finding her missing sister. When Audra arrives in the city of glitz, glamour, and stars – and learns her rising-starlet sister has been murdered – all thoughts of romance fly away.

Determined to solve the mystery and find justice for her sister, Audra takes a job with the second Hollywood Victory Caravan. Together with the handsome Robert and other stars, she crisscrosses the southern United States by rail in a campaign to sell war bonds. When other mysterious events unfold, Audra realizes that if she doesn’t get her emotions back on track where Robert Garfield is concerned, she could be flirting with real danger!

Audra Schaeffer couldn’t be more different from her gorgeous, popular sister Rosemary. Bookish and cautious, older Audra dreams of being accepted as an attorney – an atypical career choice in 1942 for a woman to make in the very male-dominated profession. Rosemary decides to try her luck in Hollywood, but the land of silver-screen dreams has a darker side than she’d ever imagined. When Audra plans a surprise visit, sure that Rosie will confide her worries face-to-face, she’s horrified to discover she’s too late – her little sister has been murdered. Determined to discover Rosie’s killer, Audra takes a job on the second Hollywood Victory Caravan war bond tour, hoping to learn more of Rosemary’s life from her peers in the entertainment business. The job has the added bonus of allowing her to spend more time with the handsome actor, Robert Garfield – but can she possibly trust her heart with a man who makes a living out of putting on an act? When it becomes clear that the killer has followed Audra on the train and is determined to cover their tracks, Audra’s only ally may be the man who makes a living from pretense. In the city where appearance is everything, can Audra uncover the truth about her sister’s killer and trust her heart to fall in love, or will she be disappointed by Hollywood illusions?

I am a huge fan of classic movies (okay, I’m more like obsessed), and thanks to Stars in the Night, Cara Putman has now made my must-read list. In fact, if I can dare to presume, I feel like we’re kindred spirits in a way – her inspired homage to the golden age of film nails every detail and story beat necessary to appeal to a fan of Turner Classic Movies like me. This book feels so authentic to the tone and history of old Hollywood and the pace and style of the classic films I adore that I found it to be absolutely un-put-downable – each page was a joy to read. While there was actually only one Hollywood Victory Caravan during World War II, for her second, fictional caravan Putman crams it with the variety of performing talent one would expect from the time period – everything from dancers to slapstick comedians to crooners. I loved Audra and Robert, and the romance Putman develops between her two leads is a sweet treat to watch unfold. There’s also a fantastic cast of supporting players. Each and every character is well-drawn and realistic, from the villains to the egotistical actors to the fans, and their personalities ring true to the time. Putman clearly has a passion for writing about the World War II time period, and her thorough research and affinity for the era bring every aspect of Stars to vibrant life with a flair worthy of the silver screen.

Stars in the Night sparkles with the glamour of old Hollywood, enhanced by a swoon-worthy romance. The suspense factor kept me turning pages, to the point that I carried this book with me everywhere until I finished it. Clearly inspired by classic film noir with a dash of Agatha Christie’s Murder on the Orient Express, Putman’s carefully plotted mystery expertly unfolds, littered with enough red herrings to keep you guessing and building the suspense to a thrilling conclusion. The faith element is also extremely well integrated into the storyline. I really liked Audra’s “outsider” take on Hollywood’s morality (or lack thereof) and Robert’s honest efforts to live out his faith in a culture that encourages compromise. Equal parts Hollywood glamour, romance, and mystery, with a dash of faith, Stars in the Night is a must-read for fans of Hollywood’s Golden Age. The story unfolds with a cinematic flair that will keep you turning pages until the very end and the closing credits roll – and like all good classic movies, Stars is a treat you’ll want to revisit. I can’t wait for Putman’s next book!

Thank you so much, Ruth! You have totally made my day and looking at your casting, I have added movies to my must see list. Thank you! And I'll be sure to let you know when my next WWII book comes out!

@Juju - Thanks! And the book IS awesome - hope you get a chance to read it!

@Cara - Oh, thanks so much for stopping by & commenting! :) Hope you enjoy the "new to you" movies too. :) Looking forward to your next book...

Oh my! A cover I really like! Definitely more my design style. And you know what I mean from our cover discussions :-)

@Lori - Have you always been loriloo? How did I miss that? LOL! And yes...not surprised you appreciate this cover design! :) Summerside Press is doing so GREAT things with covers...you should definitely check out their website!

I will check them out.

I signed up for some google group thing and it asked for a nickname and I didn't realize it would changed how I showed up.

@Lori - I gotcha...sneaky Google groups... :P Let me know when you get a chance to check out Summerside's website!