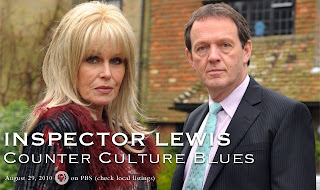 Inspector Lewis returned to Masterpiece Mystery last night with the first episode of the show’s third series, Counter Culture Blues. I have to be honest, while this episode was pretty good, story-wise it is far from my favorite Lewis episode – this is a story saved by my fascination with the characters of Lewis (Kevin Whately) and Hathaway (Laurence Fox). The “big reveal” just wasn’t that big of a shock, all things considered – the identity of the murderer was way too obvious in my view. Here’s the episode summary from the PBS website:

Loud gunshots on a local estate interrupt an Oxford church service, and Detective Inspector Lewis (Kevin Whately) and Detective Sergeant Hathaway (Laurence Fox) are stirred from their quiet Sunday plans to investigate. The estate owner is an aging rock star, Richie Maguire, part of an iconic band from Lewis's youth. The offending gunfire is the least of the chaos on the estate. Esme Ford (Joanna Lumley), the band's singer long presumed dead, has just resurfaced. And, Lewis suspects that an orphan boy has recently died just outside the estate gates. As Lewis remembers his rock-and-roll youth, the violence escalates. Yet, these fading rockers don't seem capable of much of anything, much less murder. It will take the inspiration of Inspector Morse to sort out the true suspects from the rock stars.

Beware of spoilers in this post if you haven’t seen the episode yet. And in case you missed last night’s broadcast, you will be able to watch episodes of Inspector Lewis for a limited time online at the PBS website.
As with all Lewis episodes, there were several seemingly disparate, unrelated story threads that the filmmakers managed to successfully weave together by the end of the story. There was the murdered teenage boy, Esme’s return, shadowy dealings between the members of Midnight Addiction and their old manager, and blackmail plots. As Esme, Joanna Lumley pretty much stole every scene she appeared in. She may have looked quite frightening (seriously that wig did her NO favors), but she seemed to be having a lot of fun playing once again such an over-the-top character. And the reveal at the end about her relationship to the murdered teenager was heart-rending and played quite well by Lumley.

Other than the Lewis cast regulars (and more on them in a moment) there weren’t all that many familiar faces that I recognized, anyway, populating the cast of this episode. But there were a couple worth mentioning. Perdita Weeks played Kitten, the daughter of band member Richie. I really enjoyed the relationship that was revealed between Kitten and Mack (Hilton McRae), Richie’s junkie brother. Mack’s character was just heart-breaking, and really, really sweet – so seeing him get some positive resolution was nice to see. Weeks played Lydia Bennet in the fabulous Lost in Austen, as well as Roberta in the Masterpiece Mystery presentation Sherlock Holmes and the Case of the Silk Stocking that aired a couple of years ago. She’s being blackmailed by a fellow Oxford student – Peter, played by Harry Lloyd. And this was a disturbing bit of casting, people. Lloyd played Will Scarlet in my much-loved Robin Hood television show, and the character of Peter is about as far from Will’s heroics as one could imagine. The guy positively made my skin crawl. The up side to Lloyd’s character being so smarmy? It made Hathaway look really, really good when he took him down several notches for the blackmailing scheme. Laurence Fox really shines when he gets to exhibit Hathaway’s tough and protective side. I just loved it. *g* The only other face I recognized in the cast was Simon Callow’s, and he played the group’s manager, Vernon Oxe – also one of those characters that made my skin crawl. Callow’s one of those actors who has appeared in a variety of productions – everything from Doctor Who episodes to the film version of The Phantom of the Opera. When Vernon receives his comeuppance, complete with Hathaway telling him off about his ruined suit, I just howled with laughter – the moment was too perfect, and too hilarious.

Speaking of Hathaway, the sergeant’s relationship with his superior, Lewis, is clicking even better than I remembered. I love, love, love watching Fox and Whately play off each other in these roles – they make a wonderful team, and it’s been a lot of fun watching their on-screen relationship develop from just coworkers to mutual respect and friendship. Hathaway, for obvious reasons – the main one being that Laurence Fox is just adorable – is my favorite character in the series. This script really gave him a chance to show off his wonderfully dry, sarcastic sense of humor. Whether he’s needling Lewis or backing him up from pressure from the “top brass,” the respect and friendship between these two is evident and wonderful to see. It’s interesting to see Lewis’s character this time around, since at the end of series 2 he finally discovered the culprit behind the hit-and-run that resulted in his wife’s death. He’s definitely more relaxed, I guess you could say, in his personal life. And I’ve got to say I’m hoping for a possible romance between Lewis and coroner Laura Dobson (Clare Holman). It seems, to me at least, that Laura really does like Lewis though he certainly doesn’t make it easy for her. Men! *sigh* ;-)

While this wasn’t my favorite Lewis episode, it was a welcome return for Hathaway and Lewis to my TV screen. I look forward to seeing where the rest of this season’s cases take my favorite Oxford crimefighters! Here's to four more episodes...

Thanks for the great review Ruth. I had seen this episode months ago, but it was fun to watch it again. I noticed the development of trust and ease between Lewis and Hathaway too. I think this was the most sardonic episode. Four murders yet we were laughing. Not sure I'm comfortable with that. I have seen all of the next four episodes too, and they do get much better. Interesting developments for the detectives and their support team.

@Laurel Ann - Thanks for stopping by! I do know what you mean...four murders, yet this episode was filled with a lot of sarcastic humor...made it really difficult to take the crimes seriously. Everything was almost too over-the-top. I'm excited to see the next four episodes - glad to know they get better & better!

I've been thinking of trying this show.

@Juju - Oh, this show is so worth trying out. I would definitely start with the first series, though, if you can - it is probably available through Netflix (though I don't know if it's on instant watch).

I completely agree! Not the best Lewis episode, but I'm so happy they're back I don't really care. Next week Hathaway gets involved in a romance!

@heidenkind - I know, me too - totally not shocked we agree on this. :) Looking forward to more Hathaway screentime...only a couple more days! Are you going to be doing posts on this series? Hope so... :)