The Vigilante's Bride by Yvonne Harris

by
Yvonne Harris
ABOUT THE AUTHOR:

Yvonne Harris earned a BS in Education from the University of Hartford and has taught throughout New England and the mid-Atlantic. Unofficially retired from teaching, she teaches writing at Burlington County College in southern New Jersey, where she resides. She is a winner and three-time finalist for the Golden Heart, once for The Vigilante's Bride, which is her debut novel. 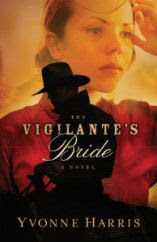 Montana Territory, 1884...Is Her Kidnapper the Only Man Who Can Keep Her Safe?
Robbing a stagecoach on Christmas Eve and abducting a woman passenger is the last thing Luke Sullivan expected to do. He just wanted to reclaim the money stolen from his pa, but instead ended up rescuing a feisty copper-haired woman who was on her way to marry Sullivan's dangerous enemy. Emily McCarthy doesn't take kindly to her so-called rescue. Still, she's hoping Providence will turn her situation for good, especially when it seems Luke Sullivan may just be the man of her dreams. But Luke has crossed a vicious man, a powerful rancher not used to losing, and Emily is the prize he's unwilling to sacrifice.

If you would like to read the first chapter of The Vigilante's Bride, go HERE
Posted by Unknown at 2:07 PM