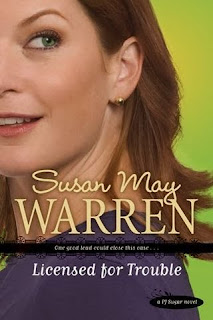 “You, PJ Sugar, have inherited the Kellogg family fortune.”

PJ Sugar has no idea why she is the sole beneficiary of the town’s wealthiest widow, a woman she barely even knew. But the timing couldn’t be more perfect – PJ has clearly worn out her welcome at her sister Connie’s house. Even if there’s barely enough in the inheritance to pay the real estate taxes on the Kellogg estate, at least it will be a roof over PJ’s head.

Unfortunately, the place has seen better days, and PJ is short on cash to make the necessary repairs. Rescue comes in the form of Max Smith, a mysterious handyman who is willing to trade his skills for PJ’s help in investigating his past.

But between trying to catch a bail jumper, working toward her PI license, and nurturing a budding romance with her boss, Jeremy Kane, PJ’s caseload is full. If she’s not careful, she’ll inherit more trouble than she knows what to do with.

Having faced down the demons from her past that kept her running from her hometown of Kellogg for ten years, PJ Sugar is ready to embrace her new life as a private investigator-in-training. However, the final step – believing in and accepting herself – may be the hardest task she’s attempted yet. PJ longs to explore the chance of a future with her enigmatic boss, Jeremy Kane, but she has a more difficult time than she expected closing the door on her feelings for her old flame, Boone, and the memories of their legendary exploits that resulted in branding her with the moniker “nothing but trouble.” When PJ finds herself the beneficiary of the town’s wealthiest widow – a woman she barely knew – the unexpected legacy forces PJ to make a choice. In order to live the life she wants, she must quit running from her past and accept the divine grace that can turn her mistakes and shame into a redeemed treasure, a springboard for a future better than she ever imagined. Couple that with an unexpected mystery surrounding an amnesiac handyman, and PJ’s sleuthing and survival skills will be put to the ultimate test. If PJ can come to terms with her past, she might just have a shot at a dream-come-true future – but only if she survives the trouble her latest investigations throw her way…

Susan May Warren’s PJ Sugar series just gets better with each successive installment. PJ’s laugh-out-loud exploits remain as funny and fresh as ever, and the mysteries she stumbles into and solves with her unparalleled sleuthing instincts have gotten better and more suspenseful with each volume. And the romance – wowzers. For my money Warren pens some of the most swoon-worthy romances in the business, and Jeremy’s character is no exception. She excels at writing the male point-of-view, and I absolutely loved how she develops Jeremy and PJ’s relationship – they are a beautiful illustration of the “face of God’s grace” to each other, and I loved each twist and turn in their budding romance (even if PJ’s nose for trouble was apt to give me whiplash). Each character in this novel is incredibly well-drawn and so realistic it hurts – but that’s just one of the many things I love about Warren’s novels. The worlds she builds and the characters she creates never fail to leave an impact because like PJ, Warren’s writing is real, and her heart for authentic stories of redemption and grace drip from every page of her books.

The crowning jewel of this series is PJ, and the character growth she experiences in her quest to find redemption and that elusive “fresh start” for which her heart longs. I think any believer, if we’re being honest with ourselves, will not be able to help but relate to PJ’s penchant for living loud and messy and seemingly unable to escape the mistakes and scars our pasts have tattooed into the very fabric of our beings. Like PJ, we can spend so much time trying to remake ourselves and prove to others that we’ve changed that we forget one very important truth – namely, that God can redeem the messiest past, and use that mess as a springboard into a future more glorious than we could ever imagine. But we have to allow Him and then accept that grace – and it’s characters like the lovable, endearing PJ that bring that truth to vibrant life. PJ’s latest case leads her on a page-turning adventure to seek the truth that grace can truly redeem the past, and that one’s past, when washed with the sweet rain of God’s grace leads to a life worth savoring.
Posted by Unknown at 3:14 PM

Ruth, This is a very well-written review and definitely gets me wanting to read PJ Sugar's saga.

@Julia - Thank you so much!! That's my goal, to spread the word about good reads. :) Hope you get the chance to read PJ's story!