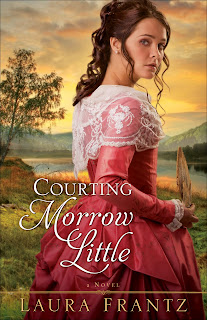 Morrow Little is haunted by the memory of the day her family was torn apart by raiding Shawnee warriors. Now that she is nearly a grown woman and her father is ailing, she must make difficult choices about the future. Several men – ranging from the undesired to the unthinkable – vie for her attentions, but she finds herself inexplicably drawn to a forbidden love that both terrifies and intrigues her. Can she betray the memory of her lost loved ones – and garner suspicion from her friends – by pursuing a life with him? Or should she seal her own misery by marrying a man she doesn’t love?

For thirteen years, Morrow Little has been haunted by the day Shawnee raiders shattered her world, killing her mother and sister and kidnapping her brother Jess. Morrow and her preacher father live caught between the grief of loss and the hope that one day Jess would return home. After two years learning to be a lady under her Philadelphia aunt’s tutelage, Morrow returns to her beloved Kentucke home to discover much has changed. Her father’s health is failing, and she finds herself the bewildered recipient of much unwanted male attention and romantic speculation among fellow settlers. Two men offer Morrow a life of safety and tradition, even privilege. But the attentions of a third – a forbidden, dangerous love – both terrify and intrigue her. In order to follow her heart, Morrow must face the fears and prejudices that have held her captive for most of her life. Only in releasing the past will Morrow be able to embrace her future and tap into the strength she never knew she possessed, to carve an abundant life from the wilderness.

Frantz’s first novel, The Frontiersman’s Daughter, was a stunning debut, saturated with the author’s love of Kentucky history and eloquently bringing to life the special breed of men and women who first sought to tame the land. With Courting Morrow Little, Frantz again vividly brings to life 18th century Kentucky in all of its danger and wild beauty. From the first pages where unfathomable tragedy visits Morrow’s young life, I was captivated by her story. Morrow is a heroine I could relate to on so many levels, particularly in her battle with fear. My heart sang for Morrow has she learned to release the burdens of fear and unforgiveness, acting in faith in the face of fear and learning the glorious reality that God’s provision is sufficient. Morrow is a character to cherish – fully realized, she leaps living and breathing from the page. And her romance – well, with Morrow’s story Frantz has simply outdone herself in this department and created one of the most memorable, swoon-worthy heroes ever. Morrow’s journey to love is heartrendingly beautiful, and the relationship forged through heartbreak and trial will stay with you long after you finish the novel’s final pages.

Laura Frantz’s writing possesses a lyrical quality that fully immerses you into the world of the novel, bringing Morrow, her acquaintances, and their world to breathtaking, colorful life. The frontier is as much a force to be reckoned with as the villains of the piece, as it pushes, pulls, and refines Frantz’s creations. On one level, Courting Morrow Little is a very intimate, very personal human drama. On another level, it is a meaty historical epic, as Frantz sets Morrow’s story against the backdrop of Revolutionary War conflict on the frontier. British, Americans, Indians, and settlers were pitted against each other by turns, and Frantz does not shy away from showing the dangerous toll of this conflict. Frantz’s latest offering is a story worth savoring and revisiting. Part coming-of-age story, part war story, and part romance, Frantz weaves together the threads of Morrow’s life with the pen of a master wordsmith, gifting readers with characters and a romance that will steal your heart. An exquisite offering, I look forward to Laura Frantz’s next book!
Posted by Unknown at 8:36 PM

Oh Ruth ~ an exquisite review!! You've blessed me immensely this Sunday morning and I count you one of my biggest blessings. I'll be coming back to savor your review again and again. Bless you, bless you, bless you!

I noticed you gushing about this book on FaceBook. :) Great review!

@Juju - I know, the publisher just outdid themselves with this cover - and for my money it's a perfect representation of Morrow!

@Laura - Oh Laura, you're too sweet! :) So happy to bless you because your writing and friendship is such a blessing!! I can't wait for your 3rd book... :)

@heidenkind - I know, I couldn't help myself from blasting FB w/ book links. :) Thanks!