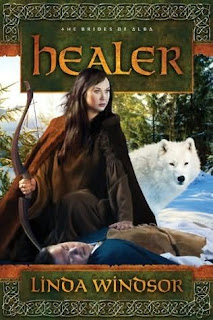 A prophecy launches this family saga of strife and superstition in Arthurian Scotland and of the healer whose love and faith are its only hope.

Her mother’s dying prophecy to the chieftain Tarlach O’Byrne sentenced Brenna of Gowrys to twenty years of hiding. Twenty years of being hunted – by the O’Byrnes, who fear the prophecy, and by her kinsmen, who expect her to lead them against their oppressors. But Brenna is a trained and gifted healer, not a warrior queen, so she lives alone in the wilderness with only her pet wolf for company. When she rescues a man badly wounded from ambush, she believes he may be the answer to her deep loneliness. Healing him comes as easy as loving him. But can their love overcome years of bitterness and greed…and bring peace and renewed faith to the shattered kingdom?

Joanna, a trained healer, chose to marry for love – and her fateful decision drives a wedge between two once-close foster brothers, leaders of the neighboring Gowrys and O’Byrne clans. When Tarlach O’Byrne’s obsession with Joanna turns violent, his bloody act sets in motion twenty years of bitter clan feuding, fed by Joanna’s dying promise – that her infant daughter would divide Tarlach’s house and usher in a peace beyond his comprehension. In the ensuing decades, Ronan, the O’Byrne heir, has grown weary of the self-destructive nature of his father’s obsession to kill the Gowrys heiress. When Ronan is attacked by a would-be assassin, the one woman he’s been reared to fear and hate nurses him back from the brink of death. Forced into a life of isolation, Joanna’s daughter Brenna carries the knowledge of her mother’s final words heavily on her shoulders – she’s a healer, not the savior the Gowrys clan desires or the wolf-woman monster the O’Byrnes fear. She longs to practice the healing arts and live her faith openly, and hopes the stranger she saves could be the answer to her heartfelt prayers. Bound by decades of fear, guilt, and bloody feuding, both Ronan and Brenna will find their faith and love tested as never before if they are to be the long-promised catalysts for peace between their warring families.

With Healer, Linda Windsor returns to what she does best in my eyes – shining a light into the Dark Ages and illuminating a fascinating period in time, the rich history and traditions of the early church. Windsor deftly weaves a vibrant tapestry of family jealousy, vengeance, forgiveness, and love during a turbulent time when pagan beliefs vied for prominence with the rise of the early church. In my view no one can spin a meaty, substantial tale set during the Dark Ages and fill it with enough passion and danger to keep you turning pages quite like Windsor. What makes Brenna and Ronan’s story even more compelling is that this time, Windsor crafts her story against the backdrop of the only historically documented Arthur, prince of Dalraida in sixth-century Scotland. I’ve always loved the stories and films of King Arthur and his knights, everything from the unabashed romanticism of Knights of the Round Table, to the gritty realism of King Arthur, to the magic and humor of Merlin. Reading about the historical Arthur and his attempts to unite the chieftains under his rule, his wise warrior-queen bride Gwenhyfar, and his advisor Merlin Emrys, a Christian druid and bishop in the Celtic Church, made for utterly absorbing reading. These characters, so familiar to fans of the legends, spring to life in a new and authentic way in the pages of Healer. I loved the authenticity, historical context, and epic feel these figures – the roots of many a beloved legend – lend to the storyline.

In addition to a liberal dose of history – including fascinating information regarding the fate of the Davidic line after the Jewish diaspora at the end of 2nd Kings – I also adore the love story Windsor spins within the pages of Healer. She excels at bringing passionate, wounded characters in search of healing to vibrant life. Brenna, and especially Ronan, are so fully realized so true to the time period, that I found it impossible not to be wholly immersed in their world. Windsor deftly illustrates the delicate push-and-pull between the Christian Celtic Church and the deeply entrenched pagan beliefs still so prevalent during this time period. When it was so easy for superstition to rule the day, the Christian practice of “nature magic” (i.e., the use of herbs and natural remedies to facilitate healing) to be misconstrued, feared, or in conflict with those who practiced spiritually dark arts. Healer is an epic tale of tragedy, love, and redemption set against the unforgettable, turbulent backdrop of early church history. This is Windsor doing what she does best, shedding light into some of history’s darkest eras, and illustrating with an unwavering confidence the transformative, life-changing capability of wild, sold-out faith. I can not wait to read Caden’s story in volume two – Thief releases Summer 2011.
Posted by Unknown at 5:48 PM

Ruth, THANK YOU for such wonderful words about HEALER. You've nailed the passion of my heart...to educate and inspire in the midst of a page-turning story and show that God is so much bigger than we can even imagine.
Blessings,
Linda Windsor

@Linda - Thank you so much for stopping by my blog & taking the time to comment! That means so much! :) I loved the story and history in Healer...no one can bring this time period to life quite like you! Blessings!