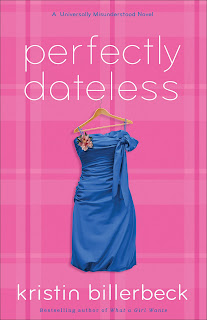 Daisy Crispin has 196 days to find the right date for the prom. There’s only one problem – her parents won’t let her date or even talk to a guy on the phone. Oh, and she’s totally invisible at school, wears lame homemade clothes, and possesses no social skills. Okay, so maybe there’s more than one problem.

Can she talk her parents into letting her go to the prom? Or will they succeed at their obvious attempts to completely ruin her life?

Perfectly Dateless is hilarious, shocking, and totally real. You’ll fall in love with Daisy’s sharp wit and resourcefulness as she navigates the world of boys, fashion, family, and friendship.

Daisy Crispin has spent most of her life invisible to the popular crowd. She’s extremely smart but has zero social skills, is forced to wear horribly unfashionable homemade clothes by her cheap parents, adnd isn’t allowed to even talk to boys. Her parents believe in courtship and have decided that she should go to Bible College and marry a preacher. When senior year arrives, Daisy decides this wallflower needs to shake things up and determines that she’ll have the perfect date for prom – the perfect picture, the perfect memory to redeem all the years she’s lost in social obscurity. But doing a complete social makeover comes with a price, and Daisy’s quest for the perfect date sets her on a journey with unexpected consequences, learning more about herself, her family, and what really matters than she ever expected.

Perfectly Dateless is a fast-paced, hilarious read. I really enjoyed Daisy’s character – she’s alternately sweet and sarcastic, but above all she comes across as very real and relatable. While for most of the novel her parents are the most extreme, cringe-worthy caricatures of Christian parents that I think I’ve ever read, Daisy’s exasperation with her parents’ “quirks” and good intentions is completely understandable, and is sure to bring back high school memories to anyone who ever remembers being frustrated with parental restrictions. My favorite aspect of the novel are Daisy’s journal entries, where she vents about everything from her parents to boys – Billerbeck nails the teenage angst perfectly. Between parents, boys, and best friend drama, Daisy is in for a roller coaster ride as she attempts change her life, not compromise her faith, and learn some surprising lessons about her perceptions versus reality.

My only qualm with this book is that there just wasn’t enough of it. At times events felt a little too rushed, particularly regarding Daisy’s work life and growing relationship with Max. The school year in Daisy’s world passes in quite literally a blur. However, that’s a minor issue compared to how much I enjoyed Daisy’s whirlwind life. Billerbeck has the snarky-but-likable teen voice down perfectly. Daisy’s faith is also integrated into the storyline extremely well – while I don’t know how much non-Christian YA readers would enjoy reading about Daisy’s life with her ultra-conservative, Christian parents, Billerbeck never crosses the line into preachiness. Daisy’s a great example of a character who’s culturally relevant (at least she wants to be) and a believer. Fresh, funny, and real Perfectly Dateless is hopefully just the first of many Universally Misunderstood Novels.
Posted by Unknown at 12:40 PM

I need that dress!