Review: Love Finds You in Victory Heights by Tricia Goyer and Ocieanna Fleiss 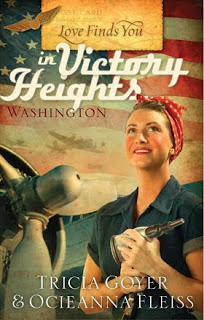 The Second World War has stolen Rosalie’s fiancé from her. But rather than wallow, Rosalie throws herself into her work at the local Boeing plant, shooting rivets into the B-17 bombers that will destroy the enemy. A local reporter dubs her “Seattle’s Own Rosie the Riveter,” and her story lends inspiration to women across the country. While Rosalie’s strong arms can bear the weight of this new responsibility, her heart cannot handle the intense feelings that begin to surface for Kenny, the handsome reporter. Fear of a second heartbreak is a powerful opponent…but will it claim victory over love?

Rosalie’s childhood dream was falling in love and having the kind of marriage and family her father, a reporter whose work consumed his life, could never seem to give his own family. When war comes and Rosalie’s brother dies at Pearl Harbor, she decides that her best friend, Vic, would make a good husband. But she puts off marrying him until his return, hoping to convince herself that she loves him enough. However, Vic never comes home, and consumed with guilt over promising to marry a man good man she never really loved, Rosalie loses herself in her work as a riveter at the local Boeing plant. Surely her valuable wartime work will help atone for the shame she carries over not being able to give Vic the love he deserved. When a chance meeting with Kenny, a dashing reporter, thrusts her into an unwelcome spotlight as a poster girl for women working to support the war effort – and possibly Kenny’s ticket to the big time, Rosie must decide if she can come to terms with her past and look beyond her fears long enough to risk a future with a reporter who seems to treasure her every word. Can she trust a story seeker, or will her scars keep her heart bound by guilt?

Love Finds You in Victory Heights is a seamless collaborative effort between authors Tricia Goyer and Ocieanna Fleiss. I’ve been a longtime fan of Goyer’s World War II novels, and was excited to see how this new, co-authored effort set on the homefront would unfold. This book is so chock-full of 1940s atmosphere and mannerisms that at times I felt like I was watching an old black and white film play out in my imagination as I read the story (and being a classic film fan, I LOVED that!). The world-crafting in this novel is superb. The authors do an excellent job bringing every aspect Rosalie and Kenny’s world to vivid life, from the sounds and atmosphere encountered at the Boeing plant to the excitement of a war bond rally graced with the presence of movie stars, along with liberal descriptions of the fabulous music that served as the soundtrack to the time. Every detail, from the setting descriptions to the clothes to the food unfolds with precise, rich detail that fully immerses the reader in 1943 Seattle. In that respect Victory Heights is like a nostalgic love letter to a time long past, a time capsule of an era when patriotism ran high and “dolls” like Rosalie couldn’t wait to get off work and cut a rug with a fella like Kenny.

The romance that develops between Kenny and Rosalie is the heart of the novel, and I loved watching their relationship develop from the moment sparks flew at their first meeting. Kenny is a great hero and his point-of-view is particularly well-drawn. We get an insider’s glimpse into his view of Rosalie (so romantic!), and I thought his struggle to reconcile his desire for affirmation and advancement in his career with his faith was quite realistic. Rosalie occasionally frustrated me. I loved her strength and how she embodied the character of a generation of women who left their homes and took on “men’s work” in order to support their country. These women were trailblazers, and Goyer and Fleiss have crafted a loving tribute of thanks to these women for their courage with this novel. But Rosalie’s “mood swings” as regards Kenny was occasionally frustrating and her faith journey felt a little rushed. More time to develop that would have been welcome. I also wish there’d been more time to resolve Rosalie’s conflict with Lanie- that reconciliation felt completely glossed over. But those issues didn’t detract from my overall appreciation of the novel. The authors deserve major kudos for creating a cast of characters who are pitch-perfect true to the time period. The dialogue is peppered with 1940s slang that adds authenticity and fun, and the attitudes and faith of all the characters populating Victory Heights ring true to the time period. If, like me, you love this history, Love Finds You in Victory Heights is the perfect cure to satisfy your nostalgic longing for the 1940s with a healthy dash of swoon-worthy romance. Here’s hoping for future Goyer and Fleiss collaborations like this one!
Posted by Unknown at 2:48 PM

I keep hearing lovely things about this one :)

Thank you, Ruth, for all your kind words!

@Juju - Really enjoyed this one - this was actually my 1st "Love Finds You" book, and a great way to start that line, if I do say so myself! :)

@Tricia - Thanks so much for stopping by & you're welcome! :)