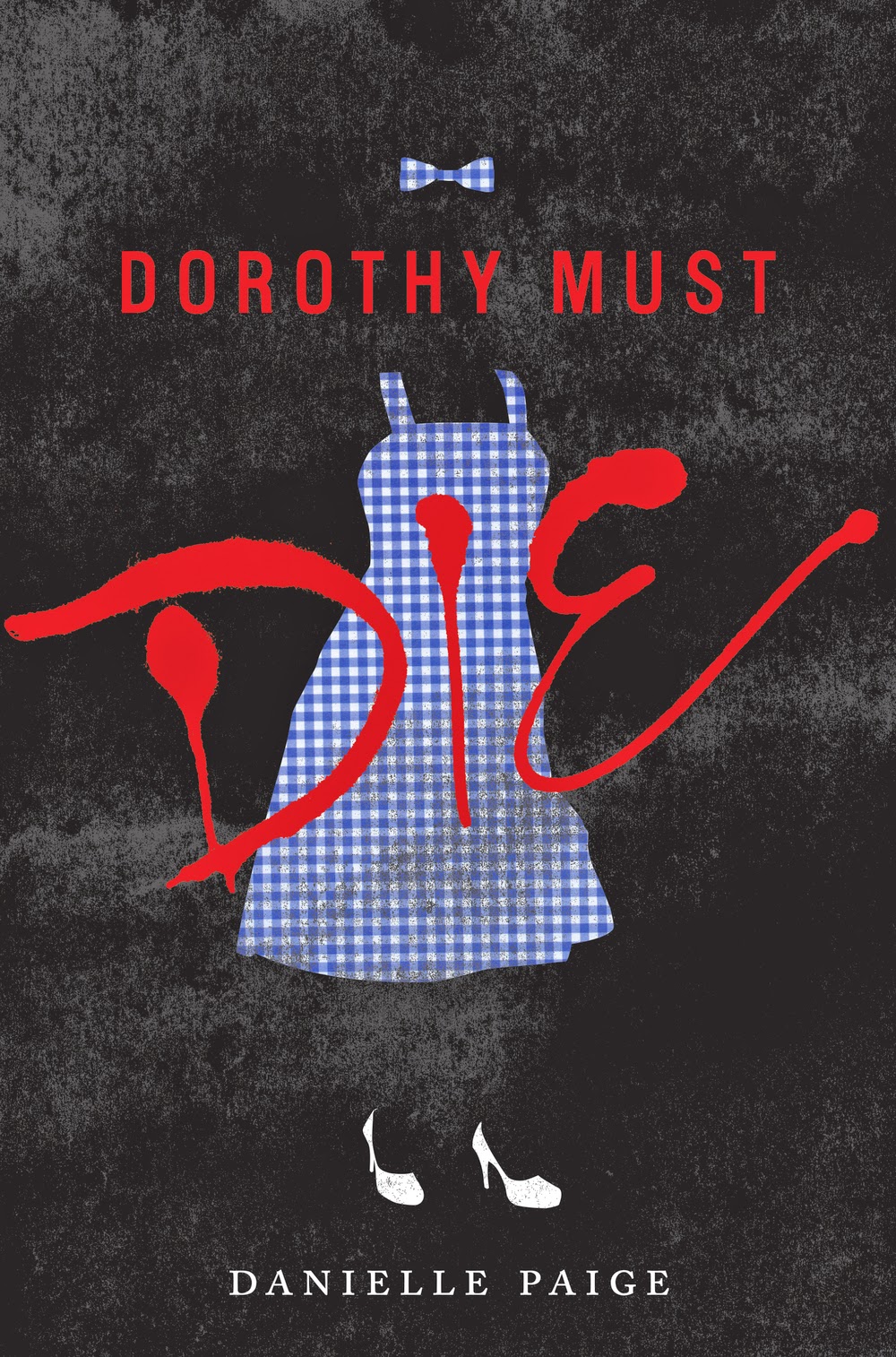 One year after Amy Gumm's father abandoned his family and four years before the accident that robbed Amy of her mother, leaving her addicted to pain pills, she learned the difference between the haves and the have-nots. She was Salvation Amy, trailer trash and social pariah -- a status underscored by her mother's subsequent emotional abandonment. Tears weren't worth the effort, and if she was ever going to escape her hardscrabble Kansas existence, the only one she could rely on was herself. After getting expelled and fighting with her mother, Amy makes a fateful wish: "There's no place like anywhere but here." When a tornado threat materializes, striking her trailer park, the unthinkable happens -- drawn into the storm's furious power, she awakens on the edge of a steep ravine, saved from tumbling to her death in the only home she knows by a boy with emerald green eyes. A boy who tells her that she's not in Kansas anymore...she's in Oz.

But this is no hallucination. The story Amy grew up with is true, but the reality of Oz is a far cry from the Technicolor-splendor that fed her childish imaginings. Oz's emerald-green, poppy-strewn countryside has been leeched of color, turned into a post-apocalyptic wasteland, with all of its resources, the magic that makes up the land's very essence, being mined and pulled to one central location: Emerald City, where Dorothy Gale sits on the throne. Amy quickly learns that the story didn't end with Dorothy's return to Kansas -- the gingham-clad heroine returned, attached herself to Ozma, and with the help of her allies the Scarecrow, Tin Woodman, and not-so-cowardly Lion, began to lay claim to Oz's magical resources. Can one outcast girl from Kansas undo another's unspeakable crimes? For joining the Revolutionary Order of the Wicked has a cost, for if Dorothy must die, Amy must find the power within to seize her fate, or risk falling prey to the various factions within Oz locked in a bitter power struggle.

At the beginning of the year I devoured Paige's prequel novella, No Place Like Oz, and fell in love with her deliciously subversive continuation of The Wizard of Oz. The original story and film are undeniable classics, but I've always gravitated towards retellings that turned the original story on its head -- Wicked the musical, SyFy's Tin Man miniseries, and most recently the Oz-centric arc on ABC's Once Upon a Time. In No Place Like Oz, Paige hit all the right notes when transforming Dorothy the innocent into a selfish, would-be princess. Paige's Dorothy is a study in teenage immaturity run amok, and with her full-length debut she delves into the resultant fallout of Dorothy's fateful choices through Amy's eyes, a girl more like her tornado-traveling predecessor than she'd like to believe.

And so it was with great anticipation that I delved into the pages of Paige's full-length debut, and Amy's decidedly modern, 21st-century take on her beloved childhood classic gone very, very wrong. I've read some reviews commenting on their disappointment that this is the first of a series, and not a self-contained story. Somewhere between reading the prequel novella and this book's release, I read about the proposed sequels, so I was prepared for this to be the first installment in a longer, epic journey. However, I will say that as such, the headline-grabbing title is a bit misleading -- for while Dorothy's death may be the desired endgame for Amy and her rebel friends, it is far from resolved in this installment.

Pacing is an issue here, as our introduction to this deliciously twisted take on Oz spans over four hundred pages and succeeds in barely scratching the surface of what is necessary for Amy to learn in order to bring Dorothy down. Nearly sixty percent of the novel covers Amy's introduction to Oz, her commission by the Revolutionary Order of the Wicked, and training. In that respect it ticks all the boxes necessary to be classified as dystopian YA -- spunky heroine with untapped potential, brooding love interest (Nox! *swoon*), eccentric supporting players, and a level of action and violence reminiscent in its intensity of The Hunger Games (or, I presume, Divergent, based on having seen that film). While there's far too much time spent prepping Amy for her mission into Dorothy's palace, I can't complain too much because I thoroughly enjoyed the ride. Having read several of the original Baum novels as a child, I loved seeing Paige twist the source material into something new, capable of spine-tingling chills and surprises by virtue of turning classic characters and their world on its head.

If Dorothy's original journey was about finding home, and getting the Tin Man a heart, the Cowardly Lion his courage, and the Scarecrow a brain, then Dorothy Must Die is a study in consequences. How those consequences play out remain to be seen, as this first volume only hints at Paige's ultimate narrative arc. However, I'm fascinated by the concept of Amy as a "new Dorothy" being tasked with undoing a grave wrong. For while the items they valued - heart, brain, courage -- are in and of themselves good, Amy's experiences call into question whether or not those gifts should ever have been granted. Did the gifts change the recipients? Or did what each individual in question most value subsequently change, and in doing so unleash havoc beyond imagining on Oz and its people? Therefore, if Amy's ultimate mission is to undo everything her predecessor put into motion, that begs the question -- how will Oz impact her, and vice-versa? It's a conceit I cannot wait to see play out in subsequent volumes!

While Oz's traditional heroes are find themselves transformed into villains within the pages of this volume -- to horrifying effect -- the lesser known, or new supporting characters that Paige crafts to flesh out her world are among the story's highlights. I particularly loved Ollie the one-time flying monkey, and his quest to free his imprisoned sister. The flying monkeys TERRIFIED me as a child, and Paige's spin on their powers and motivation adds a welcome layer of depth and poignancy to these previously nameless terrors. I also LOVED how Glinda, Oz's traditional "good" witch, is transformed into a villain and contrasted with her dark-magic twin Glamora. Glamora is hilariously snarky, but her harsh demeanor masks a heart-breaking history with her sister, a relationship that perfectly underscores the fact that nothing -- and no one -- is as it seems in this new Oz.

Dorothy Must Die is an absorbing, thoroughly entertaining, if flawed, debut, one that's left me incredibly eager for the next installment of this dark, twisted re-imagining of the classic Oz. The first third is incredibly exposition-heavy, but on balance I found Paige's decision to slowly and carefully dole out Oz's backstory wholly absorbing, as fascinating and appalling in turns as it must've seemed to the newly-arrived Amy. This is an Oz living in terror of being convicted of the Crime of Sass and sentenced to one of Dorothy's Official Attitude Adjustments, one where everything that was once good has gone horribly wrong -- and most terrifying of all, no one is immune to evil's seductive siren call. Despite its arguably excessive length and almost leisurely introduction to Amy and her mission, I absolutely devoured this book. By the final fourth, when Amy's mission kicks into high gear and the Wizard is introduced -- but his status as friend or foe remains to be seen -- the pages flew by, and the revelation of what exactly it will take to defeat Dorothy unfolds with a positively cinematic flair. Now that the exposition and set-up are complete, with a tighter narrative I have high hopes that subsequent installments will positively shine -- and I cannot wait to see where Paige's wonderfully twisted sense of humor and  inventive imagination takes readers next!

But when your whole life gets swept up by a tornado—taking you with it—you have no choice but to go along, you know?

Sure, I've read the books. I've seen the movies. I know the song about the rainbow and the happy little blue birds. But I never expected Oz to look like this. To be a place where Good Witches can't be trusted, Wicked Witches may just be the good guys, and winged monkeys can be executed for acts of rebellion. There's still the yellow brick road, though—but even that's crumbling.

Dorothy. They say she found a way to come back to Oz. They say she seized power and the power went to her head. And now no one is safe.

My name is Amy Gumm—and I'm the other girl from Kansas.

I've been recruited by the Revolutionary Order of the Wicked.

I've been trained to fight.

And I have a mission:

Then and only then—Dorothy must die!

I think I am going to have to add this to my list. I shouldn't, it is already taller than I am...but I think I might just have to.

Sounds like an interesting read. I didn't really know what this book was about so thanks for sharing your thoughts, Ruth.

Since I'm a huge fan of Tin Man, I'm curious about the Emerald City miniseries that arrives later this year; if nothing else, it promises to be entertaining. :)

@Rissi - Oh I forgot about the Emerald City project!! Thanks for the reminder!