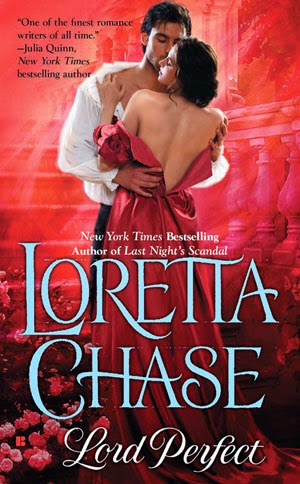 Benedict Carsington, Viscount Rathbourne and oldest son of the Earl of Hargate is a paragon. Known throughout the ton as Lord Perfect, he is a shining beacon of respectability and responsibility, the one Carsington brother who would never give his parents a moment's worry or even dream of causing a scandal. He knows all the rules, knows what is expected of him, and follows society's guidelines to their logical and well-ordered end...for uncontrolled passions and rule-breaking only beget one thing: chaos. And Benedict has enough brushes with chaos thanks to his nephew and godson Peregrine, who had the misfortune to be born to a set of parents prone to emotional hysterics and with an insatiable urge to question everything. As a widower and an acknowledged example of social perfection, Benedict was oft-times called on to exert his considerable force of will in an effort to mold Peregrine's character into a gentleman worthy of his antecedents, a task he's come to appreciate as within his nephew Benedict sees a boy seeking to become a man after his own heart -- one who seeks reason and order in a world of emotional chaos. But when Bathsheba DeLucey Wingate, of the infamous Dreadful DeLuceys, and her hellion of a daughter Olivia enter their lives, suddenly an orderly life holds little appeal if it means living bereft of the beautiful widow's company her and astonishing ability to disorder his life with a mere glance...

Bathsheba Wingate wants nothing more than to live a quiet, respectable life, the very antithesis of her upbringing among the scandal-ridden branch of the Dreadful DeLuceys. But her beloved daughter Olivia is determined to make her mama's quest as difficult as possible, for what allure can respectability hold when compared to the secrets her DeLucey-ish daughter can coax from pawnbrokers or glean from the pages of a scandal sheet? When "Lord Perfect" inquires about appointing Bathsheba as a drawing tutor for his nephew she knows any intimate acquaintance must be guarded against at all costs -- for a paragon such as Benedict, one whose smoldering good looks and quick whit belied his reputation as a virtuous bore, a relationship with the likes of Bathsheba could end in further infamy staining her reputation, for no respectable man could ever look past the DeLucey history.

Olivia is nothing if not enterprising, and wishing to alleviate some of her mother's burdens (and have an adventure in the bargain) she sets off in search of a DeLucey ancestor's famed treasure -- and manages to ensnare Peregrine in her wild scheme as an accomplice and escort. When the children are discovered missing, Benedict and Bathsheba reluctantly join forces and set off in pursuit, eager to avoid a scandal. But their quest is fraught with danger, from townsfolk determined to brawl with traveling strangers, to the dangerous and undeniable attraction simmering between Bathsheba and Benedict, threatening to explode. For if Lord Perfect were linked to a Dreadful DeLucey, the scandal that would erupt would make their children's shenanigans pale in comparison...

People, I am so in love with the Carsington brothers. This installment is the best yet, following Alistair's story in Miss Wonderful and Rupert's in Mr. Impossible. Compared to his brother Alistair, a war hero, hapless with women, and Rupert, a self-proclaimed blockhead and the despair of all who know him, Benedict is -- dare I say it? -- positively dull. But one cannot come from a family as colorful and close-knit as the Carsingtons and not have hidden reservoirs of scandalous potential. Like its predecessors, Lord Perfect sparkles with Chase's whip-smart humor, delightfully sarcastic dialogue, and sizzling romantic tension, but multiplies all by a factor of ten (at least). This book is an absolute delight from start to finish, firmly cementing Loretta Chase as one of my favorite historical romance authors.

One of the many things I loved most about Benedict's story is that both he and Bathsheba are relatively older romantic leads, both having been married before and experienced the loss of a spouse. And, contrary to social expectations regarding Bathsheba's antecedents, both have been convinced that the route to, if not happiness, than contentment, lies in operating within their respective, strictly proscribed social spheres. Both possess a strong sense of duty and responsibility, thus making the push-and-pull of their forbidden, sure to fail attraction all the more deliciously maddening. She loves his unlikely relationship with his incorrigible nephew and the golden promise of reliability, fruit of his ethical center and "perfect" reputation, while he comes to adore her sense of humor, intelligence, and fierce desire to not be defined by her relations. How can a romance that seems so right possibly survive in a world that would see both vilified by society for daring to subvert social expectations -- and therein lies this novel's delicious, heady appeal, for within the romance trope, an attraction such as Benedict and Bathsheba's cannot be denied for long.

Chase's supporting players just shine here, as Peregrine and Olivia's unlikely friendship and headlong rush into adventure (and scandal) mirrors their guardians' -- minus the passion, given their youth (they are slated to appear in Last Night's Scandal, the fifth Carsington novel -- and I cannot wait to revisit them as adults!). From the moment Olivia "marks" Peregrine as a potential money-making target, the boy is doomed, but smart enough to not go down without a fight. *wink* I loved his passion for Egyptology, his matter-of-fact, oft-times exasperated response to Olivia's flights of fancy, and the preternatural maturity with which he views his parents' unaccountable flights of emotionalism. And Olivia is an absolute delight! The letters she writes Peregrine (not to mention their conversations) are hilarious, complete with a "wretched excess of capital letters" indicative of an "overly romantic turn of mind," detail her Family Curse and the Tragic Circumstances leading to her treasure hunt so that that she and her mother would no longer be Outcasts and Lepers. Circumstances are DIRE, dear Reader, necessitating this unlikely Quest to Bristol, and if it results in the Noble Deed of bringing together their respective guardians, so much the better, eh? *wink* And I ADORED the Earl's view of his son's new romance, resulting in my favorite and most poignant example yet of good-natured parental "meddling" within this series.

Lord Perfect is a romance lover's perfect storm (no pun intended), a glorious confection of spine-tingling romantic tension, laugh-out-loud humor, high adventure, and Chase's incandescent gift for a sly, understated turn of phrase. Benedict is a hero cut from the Heyer mold, a noble of impeccable pedigree and manners and a razor sharp gift for sarcasm. The manner in which the entire plot plays out is reminiscent of a Heyer or other more traditional Regency (particularly when compared to the series' first two installments), particularly in Chase's emphasis on the social obstacles between Benedict and Bathsheba's would-be romance. Every aspect of this book clicked for me, from the sparkling characterizations and fast-paced plotting to the dialogue positively sparking from the page with romantic tension and humor. Benedict and Bathsheba were an absolute joy to spend time with, so much so that I was loathe to leave their world -- and anticipate revisiting it at the earliest opportunity. This book is an absolute GEM, easily one of my favorite reads this year!

Ideal
The heir to the Earl of Hargate, Benedict Carsington, Viscount Rathbourne, is the perfect aristocrat. Tall, dark, and handsome, he is known for his impeccable manners and good breeding. Benedict knows all the rules and has no trouble following them -- until she enters his life.

Infamous
Bathsheba Wingate belongs to the rotten branch of the DeLucey family: a notorious lot of liars, frauds, and swindlers. Small wonder her husband's high-born family disowned him. Now widowed, she's determined to give her daughter a stable life and a proper upbringing. Nothing and no one will disrupt Bathsheba's plans -- until he enters her life.

Scandalous
Then Bathsheba's hoyden daughter lures Benedict's precocious nephew into a quest for a legendary treasure. To recover the would-be knights errant, Benedict and Bathsheba must embark on a rescue mission that puts them in dangerous, , intimate proximity -- a situation virtually guaranteed to end in mayhem -- even scandal! -- if anyone else were involved. But Benedict is in perfect control of events. Perfect control, despite his mad desire to break all the rules. Perfect control. Really.
Posted by Unknown at 1:05 PM