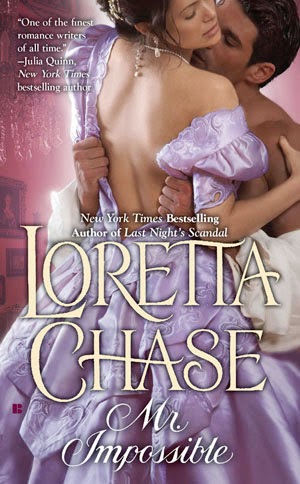 Long ago, Daphne Pembroke once let her emotions rule her intellect, and made a grave error in judgement. At nineteen, she became enamored with an older scholar who became a condescending, controlling husband, using his experience and age as leverage with which to stifle Daphne's own considerable intellect and passion for study. Forced to deny the very essence of herself -- her love of learning -- Daphne adapts in order to survive, and upon her husband's death continues her intellectual charade. Her beloved brother Myles becomes a scholar, renowned for his work in studying the enigma of Egyptian hieroglyphs, while Daphne is is loyal assistant, the world never suspecting that it is Daphne's work bringing academic acclaim to the family name. It's a sensible arrangement, one that has worked well for years, hiding the scandalous truth of Daphne's "unwomanly" intellect and allowing her to pursue her studies in peace -- until the unthinkable happens, and Myles is kidnapped by treasure seekers, determined to use the famed scholar's ability to translate hieroglyphs to discover an untouched trove of Egyptian treasure. Desperate to save Myles before the truth behind his alleged intellectual prowess is discovered, thereby nullifying his usefulness to his captors, Dapne turns to the authorities for help. But the only help that is forthcoming is Lord Hargate's scapegrace fourth son, Rupert Carsington, infamous from London to Cairo for his inability to stay out of trouble.

The utter despair of his parents, Rupert was sent to Egypt to make something of himself (or die trying), and has managed to met every challenge -- whether self-made or unceremoniously thrust upon him -- with a degree of equanimity that should make his sire proud. But digging in the sand in search of knick-knacks and ancient "thingums" is dashed boring -- and therefore, when presented with the chance to legitimately bash heads and spend time with the buttoned-up-but-beautiful Daphne Pembroke, Rupert embraces the challenge with his usual measure of enthusiasm. Particularly if, in his efforts to reunite the devoted Daphne with her missing brother, circumstances should allow him to embrace her with enthusiasm, a prospect the likes of which he is determined to avail himself at the first opportunity.

Daphne is determined to rid herself of the nobleman's blockhead of a son at the first opportunity, but as the pair begin to make investigate Myles's disappearance, unexpected danger threatens -- and the man she hired for only his brawn proves himself to be a more necessary -- and worthy -- ally than she'd ever dreamed. As they travel across Egypt in search of Myles, desperately seeking clues locked within the cryptic hieroglyphs that may aid in securing his release, Daphne finds herself irresistibly drawn to her unlikely partner in adventure, while Rupert finds himself dealing with feelings of an unexpected nature -- feelings that have as much to do with his appreciation of Daphne's "magnificent brain" as her fine figure. When an immovable object -- the determinedly bookish Daphne -- meets an irresistible force -- Rupert, the numskull of surprising depth -- the impossible occurs, and sparks fly. With danger stalking their every step, can the reckless Rupert convince his would-be lady that their relationship is a risk worth taking?

Ms. Chase returns to the Carsington family for a second tale of unlikely lovers with Mr. Impossible, even more more outrageously delightful than its predecessor. You GUYS...this book is like The Mummy meets Romancing the Stone. Cravats and breeches and adventure in 1821 Egypt? I am SO THERE. Chase refreshes the historical romance formula with a dash of adventure and a healthy dose of the exotic. In the vein of Alistair and Mirabel's stormy courtship in Miss Wonderful, the pages of Mr. Impossible sizzle with romantic tension. But more than that, what I am growing to love about Chase's fiction is her humor -- and that quality is happily evident in abundance, wherein Chase has taken one of my favorite tropes -- the bookish heroine -- and given her an adventure with a truly cinematic flair.

As a reader who counts Beauty and the Beast among her favorite fairy tales, it should come as no surprise that intelligent, book-loving heroines are near and dear to my heart -- and as such, Daphne is a gem. Though a widow as the time the story opens, the negative impact of her husband's controlling nature and the doubts he planted within regarding her self-worth cut deeply enough to continue to inform her image and outlook years after his death. I absolutely loved watching Daphne blossom over the course of her journey to find Myles, tapping into reservoirs of strength and purpose she never knew she had -- but more than that, of coming to accept herself. While a woman's access and right to education during this time was limited if not outright frowned upon, it's fabulous to see a romance where the hero is not only attracted to the heroine's intellect, but encourages it.

Unlike his brother Alistair, Rupert is a man upon whom life seems to have placed no expectations -- and he's just good-natured enough not to care, or if he does, not to let it darken his otherwise perpetually optimistic disposition. A self-proclaimed blockhead and a widely-renowned scandal-monger, Rupert could easily be the cookie-cutter definition of a rake. But thanks to Chase's deft characterization, he's quite simply too good-natured, and though he might seem to think first all too often with other parts of his anatomy rather than his brain, he is not without street-smarts. This novel is as much about Rupert defying and exceeding expectations as it is about Daphne's self-worth, and as such I loved his optimism and determination. While he is exceedingly comfortable in his own skin, he is quite capable of adapting and changing when required. Simply put, it's refreshing to read a romance where the tall, dark, and handsome hero isn't brooding, angst-ridden, and emotionally scarred -- he's self-deprecating, funny, and just plain nice.

With Mr. Impossible Loretta Chase has cemented her position on my list of must-read authors. All of the elements that I loved in Alistair's story, my introduction to her work -- from the swoon-worthy romance, sharply-drawn characters, and wonderfully sly sense of humor explode with Technicolor brilliance here. Mr. Impossible is the very definition of a rollicking, adventure-packed romance. With Chase's deliciously subversive, sarcastic sense of humor, lightning-fast pacing, exotic setting, and a chemistry so electric the sparks practically fly from the page, Mr. Impossible is the perfect blend of spine-tingling romance and high-spirited adventure. A love letter to bookishly-minded heroines, Daphne and Rupert's romance -- physicality aside, which is present in near over-abundance -- is a joy to read, the definition of opposites attract as a meeting of two more dissimilar, yet perfectly matched minds than I could ever hope to meet on the page.

Impossible
Rupert Carsington, fourth son of the Earl of Hargate, is his aristocratic family's favorite disaster. He is irresistibly handsome, shockingly masculine, and irrevocably reckless, and wherever he goes, trouble follows. Still, Rupert's never met an entanglement -- emotional or other -- he couldn't escape. Until now.

Outrageous
Now he's in Egypt, stranded in the depths of Cairo's most infamous prison, and his only way out is accepting a beautiful widow's dangerous proposal. Scholar Daphne Pembroke wants him to rescue her brother, who's been kidnapped by a rival seeking a fabled treasure. Their partnership is strictly business: She'll provide the brains, he, the brawn. Simple enough in theory.

Inevitable
Blame it on the sun or the blazing desert heat, but as tensions flare and inhibitions melt, the most disciplined of women and the most reckless of men are about to clash in the most impossibly irresistible way.
Posted by Unknown at 5:23 PM

I did really love this one.

@Tasha - Ohmygoodness, me too! I really loved the sense of adventure and the exotic setting...good times!! :)