Review: In the Shadow of Jezebel by Mesu Andrews 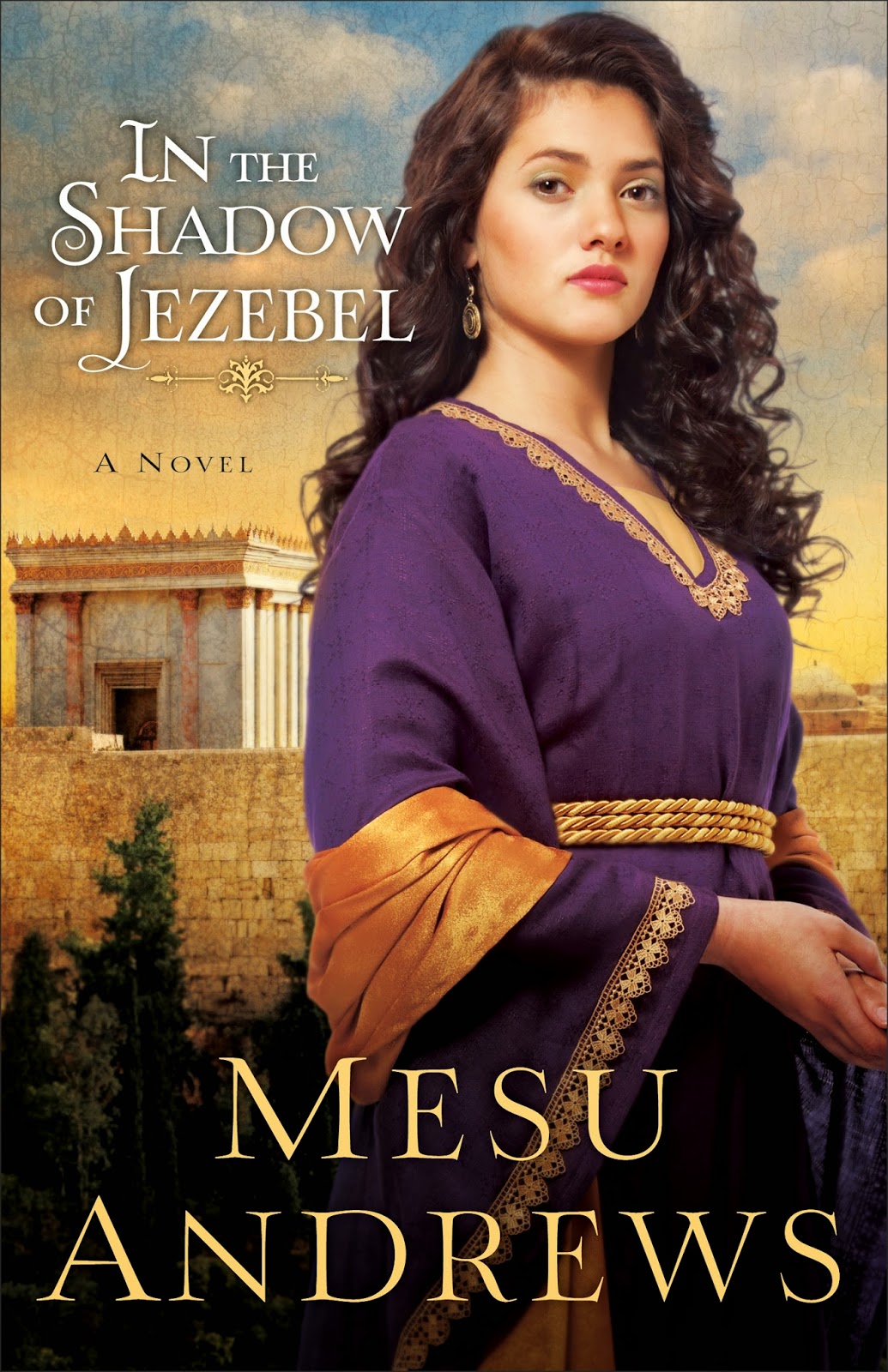 The kingdoms of Israel and Judah stand on the precipice of destruction. To the north in Israel, the Giverah Jizebaal (Jezebel), the queen mother, rules with an iron hand, determined to see the Baal worship and corrupt government that she instituted with her husband Ahab grow and flourish under her son Joram's reign. And to the south, in Judah, Jehoram sits on the throne in Jerusalem with Athaliah, Jezebel's daughter at his side, a queen every inch her mother's equal in word and deed. Although not Athaliah's daughter by blood, Jehosheba strives to make her adopted mother happy, enduring the rigors of training as a Baal priestess, her future assured. Then a letter is delivered to the court, purporting to be from the prophet Elijah -- a foe Athaliah and Jezebel thought long dead --promising Yahweh's coming judgement on Jehoram and his family for their embrace of idolatry. In defiance Jehoram makes plans to cement their alliance with Israel, sending his youngest song Ahaziah, along with his queen and favorite daughter as political emissaries. But instead of being a fulfillment of the destiny she's dreamed of, instead of strengthening her relationship with her volatile mother, entering Jezebel's orbit rips the veil from Jehosheba's eyes, revealing the extent to which she's become a pawn in the dangerous scheme of two queens determined to claim the Israeli and Judean thrones for Baal. When Jehoram's prophesied day of reckoning arrives, Jehosheba finds herself traded in marriage to Yahweh's high priest and enters the most sacred dwelling of those she's been taught to regard with fear and disdain. Within the halls of Solomon's Temple, at the side of a husband she never wanted, she begins to wonder if the God of her fathers is the answer to her heart's cry for peace -- but is she brave enough to lay claim to a very different destiny than the one Athaliah long planned for her life, where Yahweh's grace covers all her fears?

A new Mesu Andrews novel is always a highly anticipated event in my reading world, and In the Shadow of Jezebel is no exception. Andrews possesses an extraordinary gift for breathing fresh life into Old Testament texts, bringing the history and passion of the lives chronicled within the pages of scripture to life with a fresh intensity and relevancy. I was particularly intrigued by the subject matter she chose to tackle for this fourth novel, as this is the second novel I've read that explores the story of Jehosheba and Athaliah -- the first being Ginger Garrett's gorgeous Dark Hour. Taking as her basic scriptural basis 2 Kings 8-11 and 2 Chronicles 21-22, Andrews crafts a rich exploration of the history, customs, and intrigue surrounding this pivotal period in Jewish history. This is biblical fiction at its finest -- a story that takes a few slim pages of scripture and breathes life into the characters sketched upon its pages, so that once again they are more than characters, they are living and breathing individuals whose passions, mistakes, and triumphs leap from the annals of history with a stunning vibrancy. Fiction of this ilk is a powerful reminder that the Bible is more than a religious text or "life manual;" there is a history to this faith, a history peopled with individuals as gloriously unique and fallible and in need of a savior as those of us seeking to walk in their steps today.

Andrews's flair for characterization positively shines with Jehosheba, who receives scant mention in the scriptures -- in 2 Kings 11, she is hailed for saving her young nephew Joash from his murderous grandmother, while 2 Chronicles 22 adds the detail that she was the wife of Jehoiada, the high priest, and as such able to conceal the child within the environs of the temple grounds. Since there is little known of her life prior to the moment she takes center stage during Athaliah's reign, serving as the vessel through which Yahweh preserves the Davidic line of kings, Andrews crafts a backstory that is wholly plausible, engrossing and heartbreaking by turns. Emotionally abused and manipulated her entire life, until she marries Jehoiada, Jehosheba has no concept of her value as an individual, or of how to build healthy relationships, or of a faith that speaks grace and forgiveness, rather than condemnation and abuse. Her journey toward faith and healing is painfully honest, as Andrews never glosses over the deep-seated effects of emotional and physical abuse. Though the road is rocky, she walks a path strewn with grace and provision, empowering her to become a woman of grace -- a heroine for the ages who overcame her past to play a critical role in seeing God's promises fulfilled.

Similar to Love's Sacred Song, which explored the story of Solomon, In the Shadow of Jezebel is a fascinating study in the political, social, and religious aspects of Judean society. There is the faint air of a historical political thriller here, with Jezebel's pernicious influence crossing borders to wreak havoc, by planting her daughter in the Judean court and seeking to spread Baal worship and consolidate power, wealth, and influence via Baal's "queens of destiny." The sights and sounds of court life are vibrantly recreated on the page as Andrews's research and passion for the period shines, transporting readers to a world long since returned to dust. Even more fascinating is the insight she provides through Jehoiada and Jehosheba's lives and roles as regards the Jewish faith and Temple protocols. And speaking of Jehoiada, I loved how Andrews handled his developing relationship with Jehosheba with such delicacy, especially considering the multiple decades difference in their respective ages (Jehoiada lived to be 130 - 2 Chronicles 24:15).

In the Shadow of Jezebel is a stunning re-creation of a pivotal, dangerous time in Judah's history, where for all the darkness of idolatry and corruption, the redemptive light of God's never-failing promises and provision shines all the brighter. Once again Andrews has delivered a masterful example of why I love biblical fiction -- it's powerful potential to illustrate timeless truths with freshness, vibrancy, and passion. And, to remember that there but for the grace of God go you or I -- as in the case of Jehosheba's beloved brother, Ahaziah, forever immortalized in scripture as one who "did what was evil in the sight of the Lord" (2 Kings 8:27). But was this godless king always so? Or, is it possible, as Andrews posits within the pages of her novel, that Ahaziah is a tragic example of one who chose to reject the faith of his fathers out of expediency, and so embarked on the slippery slope of compromise until, one day, the call he'd run from became the final judgement that could denied (2 Kings 9:27). Villains are not born thus -- choices are made. When the darkness seems overwhelming, may one remember, like Jehosheba, to listen for the still, small voice calling us to be brave, and then may we leap into the unknown, trusting in the provision of a God whose promises never fail.

In a kingdom controlled by cruel and manipulative women, one princess will discover the power of truth and love.

Trained as a priestess in the temple of Baal, Princess Jehosheba strives to please the demanding Queen Athaliah, daughter of Jezebel. But when a mysterious letter from the dead prophet Elijah predicts doom for the royal household, Jehosheba realizes that the dark arts she practices reach far beyond the realms of earthly governments.

Forces to marry Yahweh's high priest in order to further Athaliah and Jezebel's power plays, Jehosheba enters the unfamiliar world of Yahweh's Temple. Can her new husband show her the truth and love she craves? And can Jehosheba overcome her fear and save the family -- and the nation -- she loves?

With deft skill, Mesu Andrews brings the Old Testament to life, revealing a fascinating story of the power of unconditional love.
Posted by Unknown at 11:48 AM

@Renee - I could not agree with you more, my friend!

WOW! I want to read THAT book! ;) You are amazing my friend. YOUR gift with words is inspiring, and I'm serious...my heart was racing by the time I read your last sentence. You rock, woman!

Thanks for this awesome review. I'm awed by the Lord's work in hearts as folks read these stories and then return to His Truth for a deeper experience of Him. Your partnership in this ministry is profound. You are a blessing, my friend.

In His Arms With you!

Climbing to the Higher Calling said...

Thanks for your post. I enjoyed this novel also, and it's fun to see how others saw it. I especially liked your quote: "there is a history to this faith, a history peopled with individuals as gloriously unique and fallible and in need of a savior as those of us seeking to walk in their steps today."
The Bible is so rich and is my favorite book. I love these OT characters because through them, God shows his ultimate mercy and grace to common people like me.
Thanks again!

@Mesu - LOL! Thank you SO much for your lovely comment, your books, but most of all, your FRIENDSHIP. I am so honored and blessed to be considered a partner, to BE a partner in this small way and help spread the word. Blessings to you too!

@Debi - You're welcome, thank you for commenting! I love how Mesu brings Old Testament history to life with such passion!

I have never been much into fictional books dealing with Judeo-Christian history, but I have to say you make a strong case for this one! I also watched a movie not that long ago called One Night with the King about Esther and it was sooo good. If you have not seen it, I recommend it.

LOVED this book. I find myself still thinking through the ways the story has probed my own heart and given me both a broken heart for those who choose evil and a stronger faith that God will indeed have His way in the end.